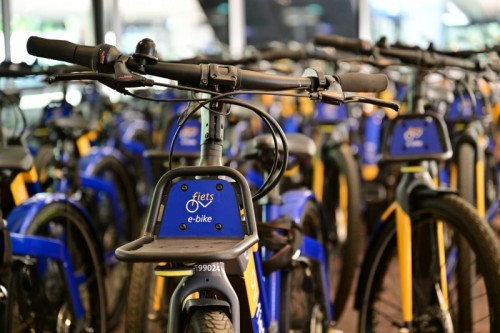 The company wants to see if e-bikes prove a popular option and for which distances people are using them. It will also track speed and map usage.

‘With the public transport e-bike, we also want to make it even easier for travellers who have to travel a little further from the station to take a bicycle for the last part of their journey,’ Marise Bezema, head of services at NS, said.

The trial started with 30 e-bikes in the familiarly branded blue and yellow of NS at Driebergen-Zeist. Three other as-of-yet-unknown stations will also rent out e-bikes in the future.

Driebergen-Zeist was chosen for its proximity to nature—trips that cyclists can benefit from a little electric boost. ‘At the weekend, the Utrechtse Heuvelrug is a popular destination for travellers who come to Driebergen-Zeist station by train,’ says Bezema. ‘Due to the trial with the public transport e-bikes, travellers can also explore the nature reserve by electric bicycle.’

The e-bikes can travel up to 110 kilometres depending in what mode they’re being driven, and NS says its batteries—which renters are not allowed to top up by themselves—are charged with ‘100% green energy.’ The rental cost of an OV e-bike is €10 per day, compared to €4.15 for a regular OV pedal pusher.

The bikes will also be equipped with GPS trackers so they can be located in the event of theft. To protect privacy, personal data—the purview of NS—has been separated from location data, which only the bike supplier (Noord) has access to.

The NS currently rents out some 22,000 public transport bicycles at 300 locations to those in possession of a personal OV chip card.

A brand new city-builder from Lemur Software has launched onto the App Store, this time one that’s centered around our childhood dreams of building up a huge metropolis using nothing but our Lego blocks. Brictopia takes that idea and turns it into a fully fledged city simulator, where every ...

Here’s a look at Monday’s World Cup matches: Group G: Cameroon vs. Serbia 5 a.m., FS1 This is almost certainly a win-or-out clash for both teams after they dropped their respective openers in Group G. Cameroon’s loss to the Swiss marked its eighth in a row in World Cup play ...

Singaporean developer XII Braves has begun the next phase of closed beta testing for its upcoming mobile RPG Valiant Force 2. The sequel to the extremely popular Valiant Force released back in 2016, this gacha turn-based JRPG series harkens back to some of the classics, and features an immense ...

Sibling unease dogs Prince William's 'Earthshot' US trip Prince William and the Princess of Wales will make their first trip to the U.S. in eight years this week, hoping to focus attention on their Earthshot Prize for environmental innovators FILE – Britain’s Prince William and Kate, Duchess of Cambridge visit ...

Beat Repeat, a brand new rhythm/memory game with some striking visuals and a fantastic soundtrack, launches onto iOS