Cops have identified four of the women dressed in bizarre neon-green jumpers accused in a caught-on-video attack on two teens aboard a Manhattan subway train.

Police released images the suspects during a Friday press conference at police headquarters. NYPD Chief of Detectives James Essig said an accidental bump on the subway platform set off the green-clad monsters, who were caught on video attacking their 19-year-old victims.

All four known suspects have criminal histories, with Peguero leading the pack with nine arrests.

Five of the suspects are still not identified, said police.

The nine green-clad suspects are Tik Tok performers who carried out their assault just after doing a video shoot in Times Square, said cops.

The teen victims were waiting for an N train in Times Square around 2 a.m. Sunday when the attackers came down the stairs “loud and obnoxious,” one of the victim’s mothers told the Daily News. 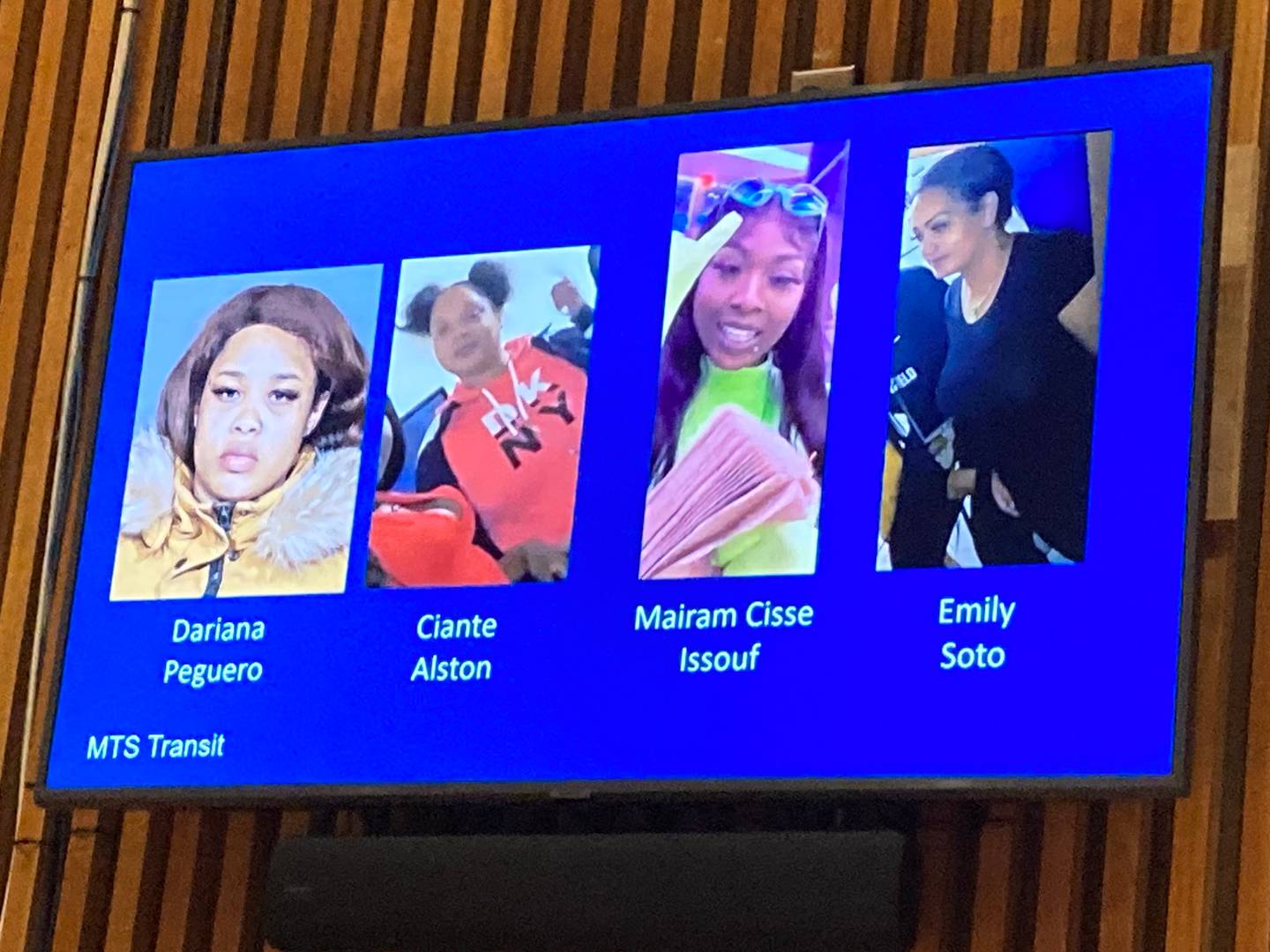 Police released images of four women who authorities said were seen in a video wearing green jumpsuits and getting into an altercation Sunday aboard a subway train. (Rocco Parascandola/New York Daily News)

The teens tried to avoid the zany-dressed straphangers, but the suspects followed them onto the train and attacked them, the mother said.

“There was a bump on the subway platform,” Essig said. “One of the girls bumped into the other. It just escalated onto the train and got out of hand. When the fighting escalated one of (the suspects) ripped off the purse containing the victim’s ID.”

Essig’s rundown of the incident was in line with an account given to the Daily News by the mother of one of the victims. Two young women were pummeled and robbed by a crew wearing neon green jumpsuits on a Manhattan train. The 19-year-old victims were on an N train near Times Square when they got to in argument with at least six women dressed in the alien inspired get ups about 2 a.m. Sunday. As the disagreement escalated, the green-clad women attacked, bizarre video posted to Reddit shows. (RoBoyJones / Reddit)

The assailants kicked and repeatedly punched the teens as at least one member of the group walked away, apparently not interested in joining the fight, the video shows.

The victim’s mother described her daughter as 5 feet 4 inches tall, with her friend about the same height.

“My daughter is a tiny little girl and so is her friend and some of these women were three times their size. They were big women,” the mom said.

One of the Shrek look-alikes spin-kicked a victim into a chair and onto the floor of the train as at least four men onboard watched or recorded the chaos.

One of the woman was carrying a knife on her leg, the victim’s mom said.

“Thankfully my daughter is here. It could have been so much worse. These people belong in cages,” she commented.

Anyone with information about the four suspects are urged to call NYPD Crime Stoppers at (800) 577-TIPS. All calls will be kept confidential.

For the first time in 673 days, T.J. Warren is expected to play in an NBA game. The forward was not on the Nets’ injury report, which clears the way for his team and season debut Friday against the Raptors at Barclays Center. When Warren retakes the court, he will ...

Florida firework factory explodes and leaves at least five injured after fire broke out. OCFireRescue/Twitter At least five people, including a teenager, were injured after a large fireworks warehouse in Florida exploded Thursday night — the second such blast in the Sunshine State this week. The fire erupted at ...