Rapper, 30, took to social media on Tuesday with message for fans He said, 'Don't post takeoff unless it's in good light,' on Instagram StoriesTakeoff was fatally shot at 28 November 1 in Houston

Offset took to social media Tuesday to request his followers only share positive memories of his late Migos bandmate Takeoff.

‘Don’t post takeoff unless it’s in good light,’ the 30-year-old rapper said Tuesday in an Instagram Stories post on his page, more than a month after Takeoff was fatally shot at the age of 28 outside a Houston bowling alley November 1, as an arrest was made in the shooting earlier this month.

The rap artist, whose real name is Kiari Kendrell Cephus, shared a picture of Jesus Christ with the caption. 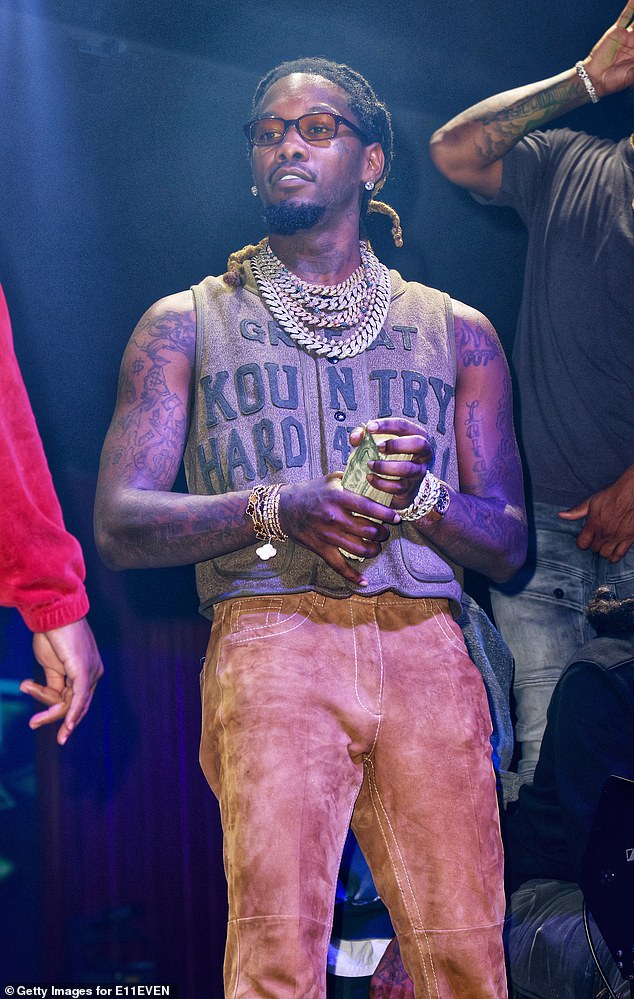 The latest: Offset, 30, took to social media Tuesday to request his followers only share positive memories of his late Migos bandmate Takeoff, who was killed last month at 28. Offset was pictured earlier this month in Miami

According to TMZ, Offset might have to been ‘reacting to the latest social media rumors’ the late musical artist’s parents, Titania Davenport-Treet and Kenneth M. Ball, were at odds over his estate ‘as he’s said to have died without a will.’

The other member of Migos, Quavo, has not posted to social media since the day after Takeoff’s November 11 funeral, when he shared a picture of them as children.

The social media post came a day after an attorney for the suspect arrested in connection with the slaying, Patrick Xavier Clark, 33, said her client claims he is innocent of the crimes he’s accused of.

Clark made a brief court appearance in which prosecutors and his defense attorneys agreed to hold a bond reduction hearing on December 14. 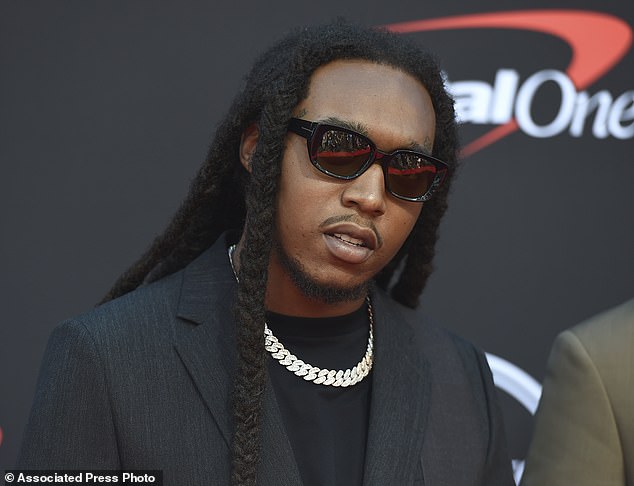 Takeoff, 28, was shot in the head and back as more than 30 people were leaving a private party at the bowling alley around 2.30am on November 1. Gunfire broke out during a disagreement over a ‘lucrative’ game of dice, where Takeoff was ‘an innocent bystander’ 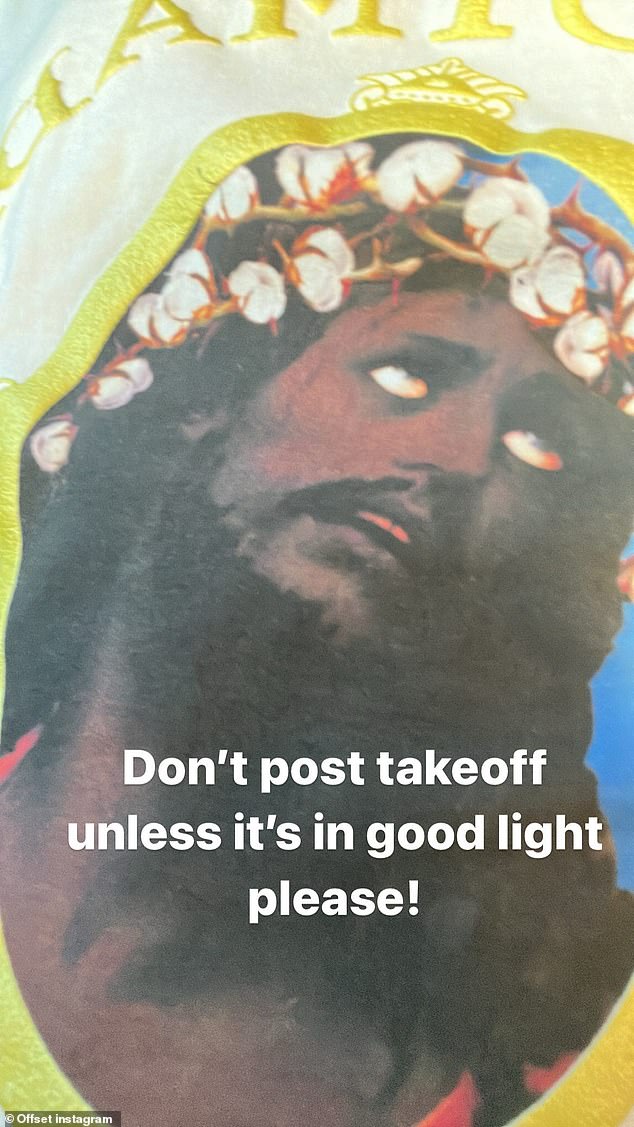 
Clark was arrested on a murder charge last week and is jailed on a $2 million bond. Court document showed he had a ‘large’ amount of cash on him and had planned to go to Mexico on an expedited passport when he was arrested.

Takeoff was shot in the head and back as more than 30 people were leaving a private party at the bowling alley around 2:30 a.m. on November 1.

Gunfire broke out during a disagreement over a ‘lucrative’ game of dice, where Takeoff was ‘an innocent bystander.’ In footage from the scene of the incident, Takeoff can be seen lying on the ground while his uncle and Migos bandmate Quavo desperately tries to save him.

Police have said another man and a woman suffered non-life-threatening gunshot injuries, and that at least two people opened fired. Police said investigators are still trying to track down witnesses.

On Monday, Clark, handcuffed and dressed in orange jail clothing, did not say anything during Monday’s hearing. Letitia Quinones, one of Clark’s attorneys, told reporters after the hearing that Clark is feeling ‘nervous and he’s concerned’ because ‘he´s being charged with something that he believes he’s innocent of, so how would anyone do in that type of circumstance?’ 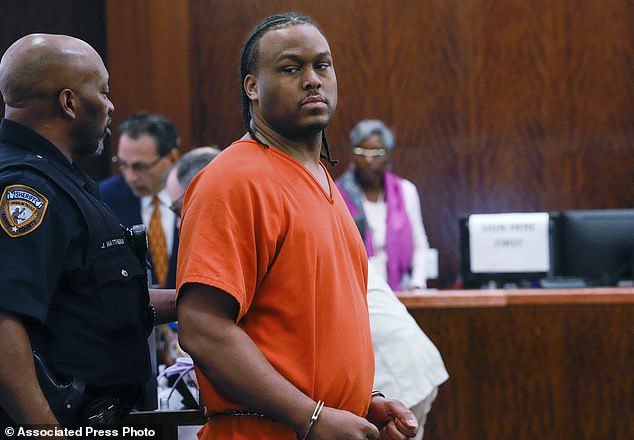 Patrick Xavier Clark, 33, made a brief court appearance in which prosecutors and his defense attorneys agreed to hold a bond reduction hearing on December 14 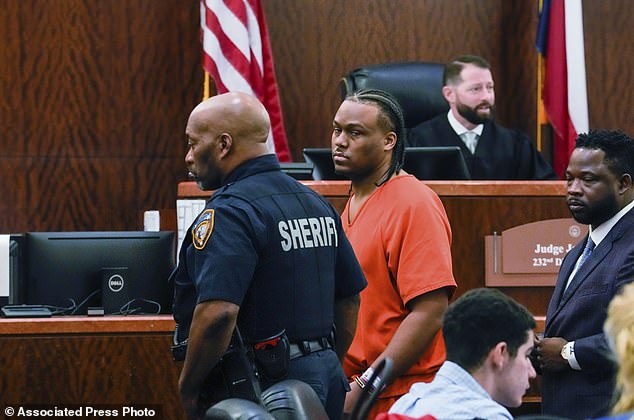 Clark was arrested on a murder charge last week and is jailed on a $2 million bond. Prosecutors said he had a ‘large’ amount of cash on him and had planned to go to Mexico when he was arrested

Houston Police Chief Troy Finner said last week that investigators didn’t know whether Clark was invited to the party or if he knew Takeoff. Clark works as a DJ, according to court records.

Asked Monday if Clark knew Takeoff, Quinones said, ‘We really don’t want to go into the facts at this point.’

She said that Takeoff´s death was a ‘tragedy and it’s happening well too often in our communities.

‘There is a lot of investigation that needs to be done. So, we just ask that everyone keep an open mind and let the system do its part and let the Constitution do its part and that is, right now he´s innocent until he´s proven guilty,’ Quinones said. 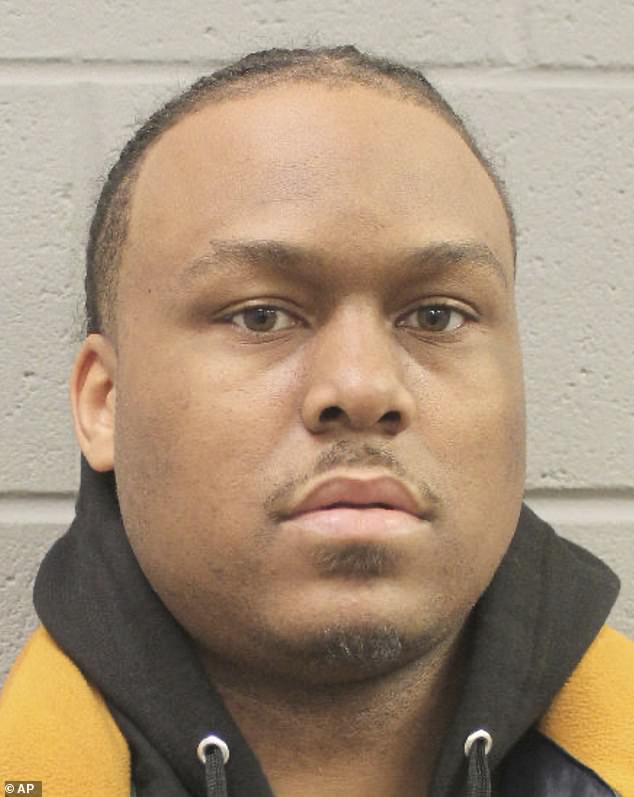 Patrick Xavier Clark, 33, (pictured in his mugshot) was arrested last week and charged with the murder of Takeoff, who police said was an ‘innocent bystander’ when he was struck by gunfire outside a Houston bowling alley on November 1


Court records indicate Clark was arrested as he was preparing to leave the country for Mexico after getting an expedited passport and that he had a ‘large amount’ of cash.

Quinones said that Clark had been planning to go to Mexico on a vacation but had canceled his trip before his arrest.

Migos first broke through with the massive hit Versace in 2013. They had four Top 10 hits on the Billboard Hot 100, though Takeoff was not on their multi-week number one hit Bad and Boujee, featuring Lil Uzi Vert.

They put out a trilogy of albums called Culture, Culture II and Culture III, with the first two hitting No. 1 on the Billboard 200 album chart.

Clark, who ran the strip club The Flame HTX, also tweeted on November 8: ‘Been hurt so many times it’s hard for me to feel love.’

A day after the shooting, on November 2, Clark had tweeted: ‘God got me he been had me.’

As news of Clark’s arrest over Takeoff’s murder, those who knew him were shocked because ‘that’s not the type of person he is’ – with some claiming he was being ‘framed’.

‘I know him. He’s not like that. I honestly feel like they got the wrong guy,’ one of Clark’s friends told the Daily Beast. ‘He doesn’t get mad or hostile. He’s very nice and thoughtful. That’s all I have to say. I feel he is being framed.’

Rapper Jmali said: ‘You could see by the reactions of everyone that we’re shocked because that’s not the type of person [Clark] is. He was about business, not violence.’

He added: ‘Pat was similar to Takeoff in that he was quiet and just went about his business. That’s why this is so surprising to everyone here.’