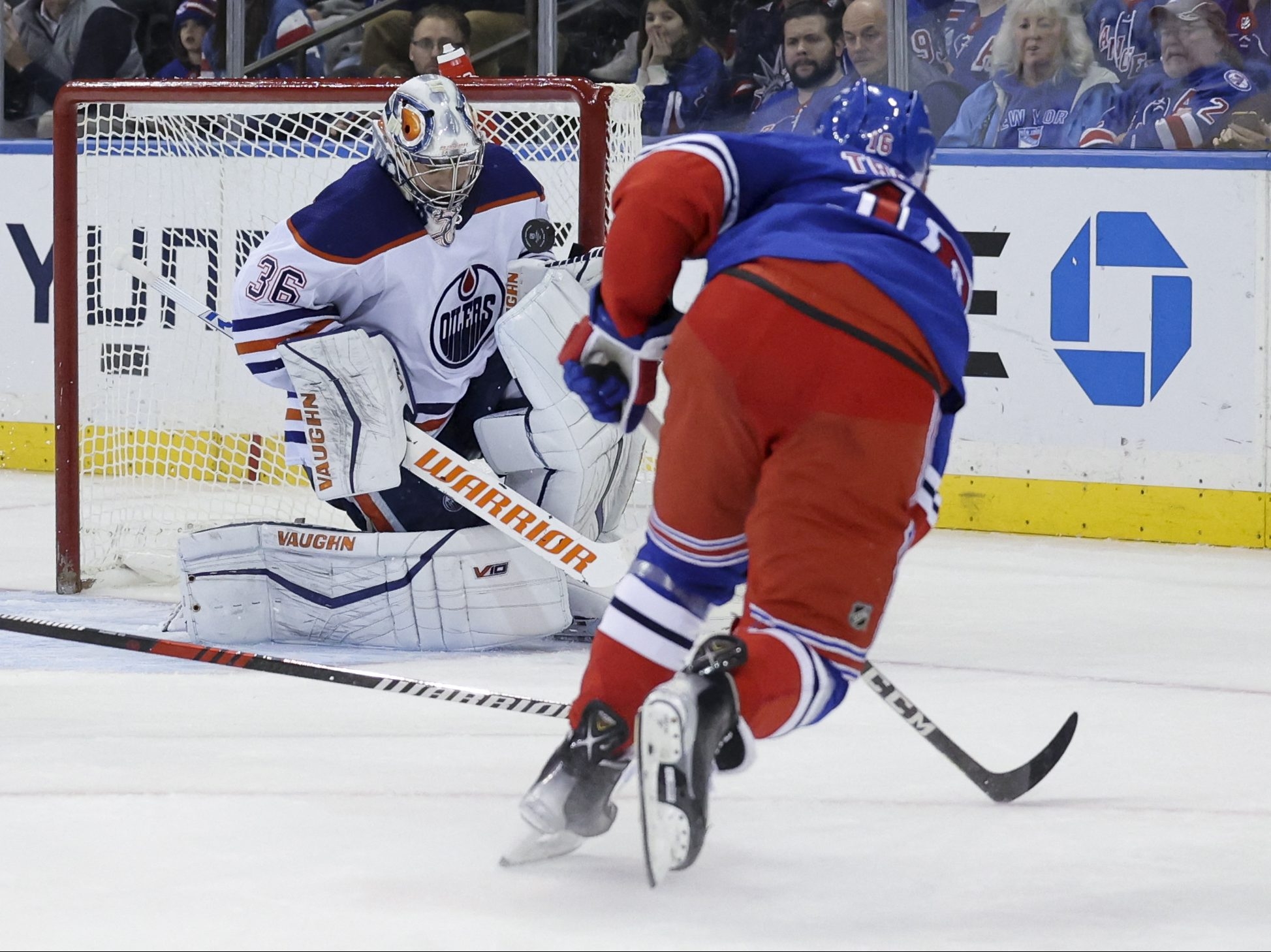 Oilers goaltender Jack Campbell makes a save against Rangers’ Vincent Trocheck on Saturday.

Saturday’s four-goal, third-period explosion at Madison Square Garden was the first time in almost 33 years that the Edmonton Oilers won a game in regulation time after being down 3-0 with 20 minutes left.

It has only happened six times in the Oilers’ 44-year history.

Back on Jan. 25, 1990, Vladimir Ruzicka, Petr Klima, Jari Kurri (all on the power play, with assists from captain Mark Messier) and Glenn Anderson rallied the Oilers from down 6-3 to the Los Angeles Kings at Northlands Coliseum. Kelly Hrudey was the unfortunate victim in the L.A. net in the Oilers’ 7-6 victory

Now the question is whether the current Oilers can build off their stunning comeback against the New York Rangers, following that up against the Florida Panthers on Monday night. The last time the Oilers won two in a row was Oct. 29 against the Calgary Flames and Nov. 1 against Nashville, so a month ago.

The Oilers beat a red-hot Las Vegas Golden Knights team at Rogers Place before the just-completed Eastern road trip and thought they were on their way, but it wasn’t the case.

“Everybody’s searching for that moment in the season where you can build off something and then take off,” said Oilers’ coach Jay Woodcroft, with his team 11-10, 6-4 on the road and 5-6 at home.

“Our second period in New York was one of our best periods (on the road trip which started in Jersey and went to Long Island) and to walk off, everybody’s heads were dragging a bit,” Woodcroft said.

“You’re down 3-0 but we talked in the dressing room. Our shoulders were back and in the end we had people who hadn’t been on the scoresheet contribute and we clawed back into the game.”

“It was a dramatic win but whether that’s a watershed moment where we put a big string together, time will tell. I don’t know that today. We’ll know in a month if that was the moment. We have to start stacking more good games than not. We have to live it on a night-in, night-out basis,” he said.

The Oilers (70 goals for and 75 against) can score (11th in the league) but clearly they’ve had major trouble defending. Only five teams (Los Angeles, Vancouver, San Jose, Columbus and Anaheim) have given up more.

“Hockey’s a game of mistakes and it’s a matter of making fewer than the other team and capitalizing on the ones that we get,” said Woodcroft.

Oilers winger Kailer Yamamoto was on the ice for Sunday’s practice at the Downtown Community Arena, obviously a good sign, but the winger is still listed as day-to-day, possibly with concussion-type symptoms, maybe lingering effects of a crash into the end boards during pre-season. He’s played 13 of the 21 games but hasn’t been himself.

“Slow process but I’m getting there. I am feeling better. I obviously want to be out there but I trust the training staff and the doctors,” Yamamoto said.

Yamamoto wouldn’t say if the problem was the incident in exhibition when tripped by Canucks’ Danny DeKeyser, who was at Vancouver camp on a tryout.

“I don’t want to get into specifics,” he said.

“He didn’t come with us on the trip but having him out there today was a really good sign,” Woodcroft said. “He’s real close.”

McLeod, who had three assists in the third period of the comeback in New York, didn’t skate Sunday and was put on injured reserve with an undisclosed issue. After the practice Woodcroft said it was just “a maintenance day” for McLeod and they were just bumps and bruises. But it’s more than that. Winger Warren Foegele, who was hurt in the third period Saturday when he appeared to maybe catch a rut in the ice, didn’t skate either. But he wasn’t added to IR…The Oilers recalled Tyler Benson, down in Bakersfield on a conditioning stint after injuring his knee in camp, and James Hamblin from the farm. They also added Yamamoto to IR, retroactive to Nov. 8 in Tampa. … Rookie Dylan Holloway was a force in the third-period rally but the scoresheet still showed he only played 8:04. It seemed like he’d played 15. He started on the fourth line. Whatever, they were clearly quality minutes (11 shifts) with his first NHL goal on Igor Shesterkin and being involved in two others. “Yeah, I was surprised when I saw that (time-on-ice),” said Woodcroft … Florida captain Sasha Barkov, who was sick (non-Covid) and missed Saturday’s 5-4 loss to St. Louis, didn’t fly here with the team Sunday for Monday’s game and Tuesday in Calgary. The Panthers were forced to go with only 19 skaters (11 forwards) in Blues’ comeback victory because of cap issues, but called up Alexsi Heponiemi from their AHL farm club in Charlotte to give them 12 forwards … With no Barkov, Sam Bennett was No. 1 Florida centre against the Blues with Anton Lundell in the No. 2 hole and veteran Eric Staal as their No. 3 centre … The more you watch Lafreniere’s penalty late in the Oilers-Rangers game, you see how senseless it was for the time of game and with how good the Oiler power play is after he pulled Tyson Barrie’s helmet off his head in a tussle along the boards … Evander Kane was out skating with his little girl at the DCA after the practice Sunday. They were there because Arcade Fire had their show at Rogers Place…Leon Draisaitl skated by Rangers captain Jake Trouba after his PP goal winner Saturday, on the way to the Oilers bench and knocked the stick out of Trouba’s hands. Accidentally, on purpose?…After an impressive first few games since his call-up, Klim Kostin only played 6:29 in New York.