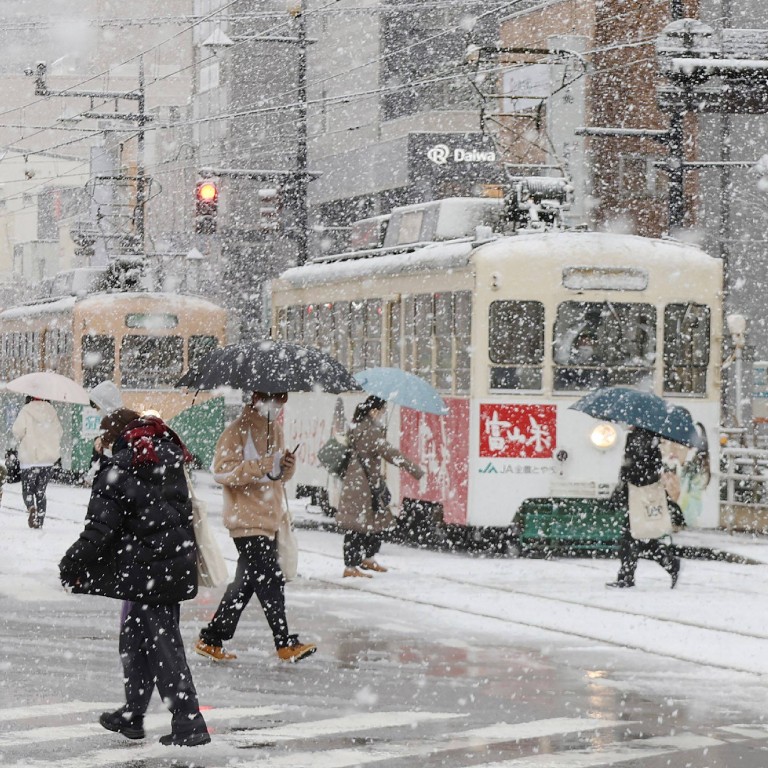 Thousands of Hong Kong tourists in Japan are facing disruptions in their holiday plans as a “once-in-a-decade” blizzard rips through the country, shutting down railways and major thoroughfares.

Holidaymakers about to set off for Japan remained undeterred on Wednesday, as they continued to monitor flights bound for one of the city’s most popular travel destinations.

Those already in Japan, meanwhile, were left with no choice but to change plans, with many stranded in coaches stuck in traffic, according to Steve Huen Kwok-chuen, head of a travel agency specialising in Japanese tours. 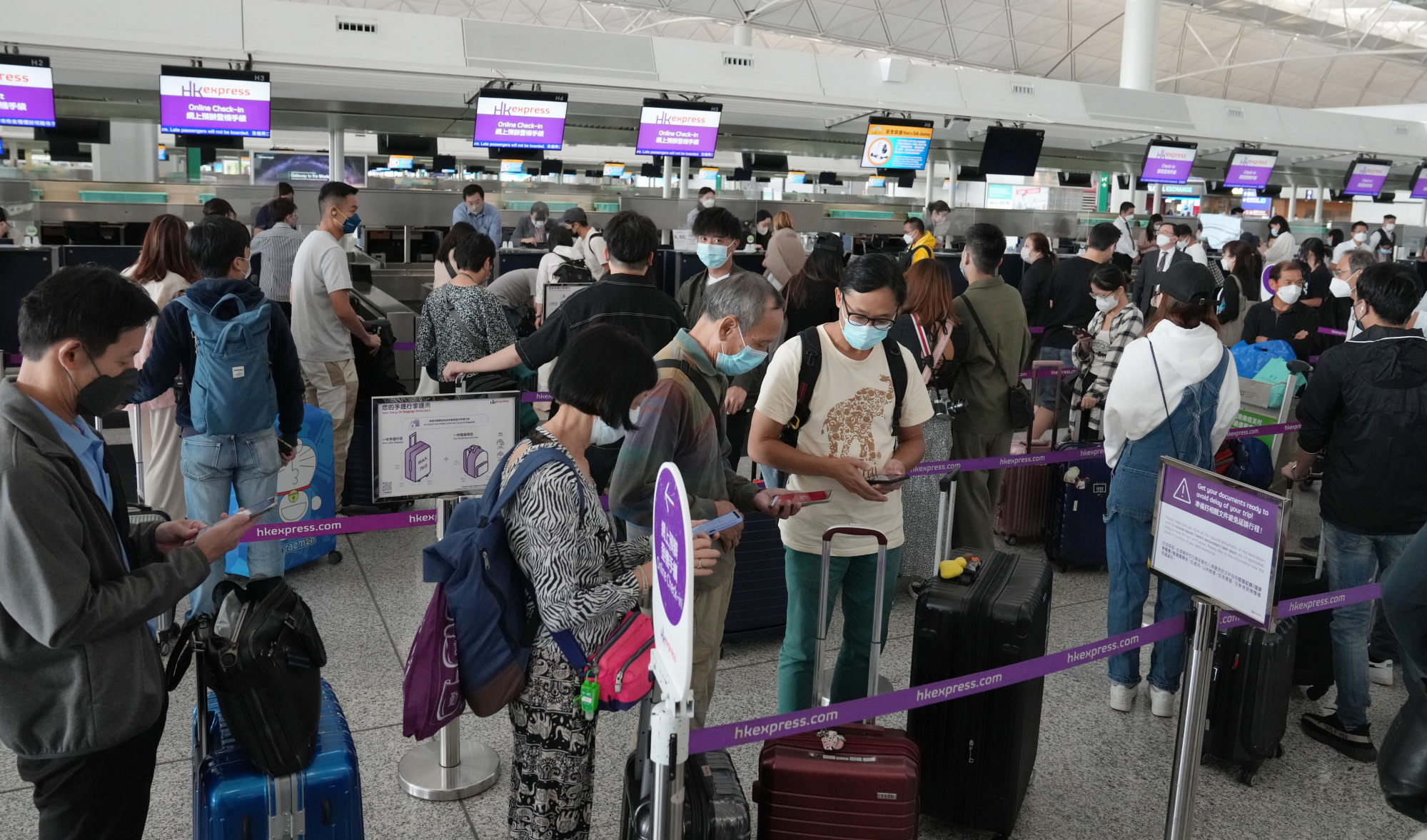 Outbound travellers at Hong Kong’s airport. Many in the city are headed for Japan with Covid restrictions on both sides eased. Photo: Sam Tsang

Kwok, executive director of EGL Holdings, said his company had between 2,000 and 3,000 clients in the country across 60 tour groups, adding that while customers were not affected by flight changes, local transport and infrastructure had become unstable.

“Due to the heavy snow, many highways and railways have shut down, causing hurdles for tour groups to reach their destinations or accommodation,” he said.

Kwok added that at least three groups in Hokkaido bound for Furano, a popular spot for ski enthusiasts, had to turn back due to extreme weather.

Other groups in the southern prefecture of Kyushu and in the city of Kanazawa, home to many Japanese gardens along the coastline of the Sea of Japan, changed their hotels.

“But tourists have been very understanding as they know the situation was caused by extreme weather,” Kwok said, adding that such blizzards were rare.

He expected the situation to improve with the weather stabilising on Wednesday.

Yuen Chun-ning, executive director of travel agency WWPKG, told the press his company had about 1,000 tourists in Japan.

He said 60 were briefly stranded at Kansai International Airport in Osaka on Tuesday with services on the bridge connecting the island airport with the mainland suspended. 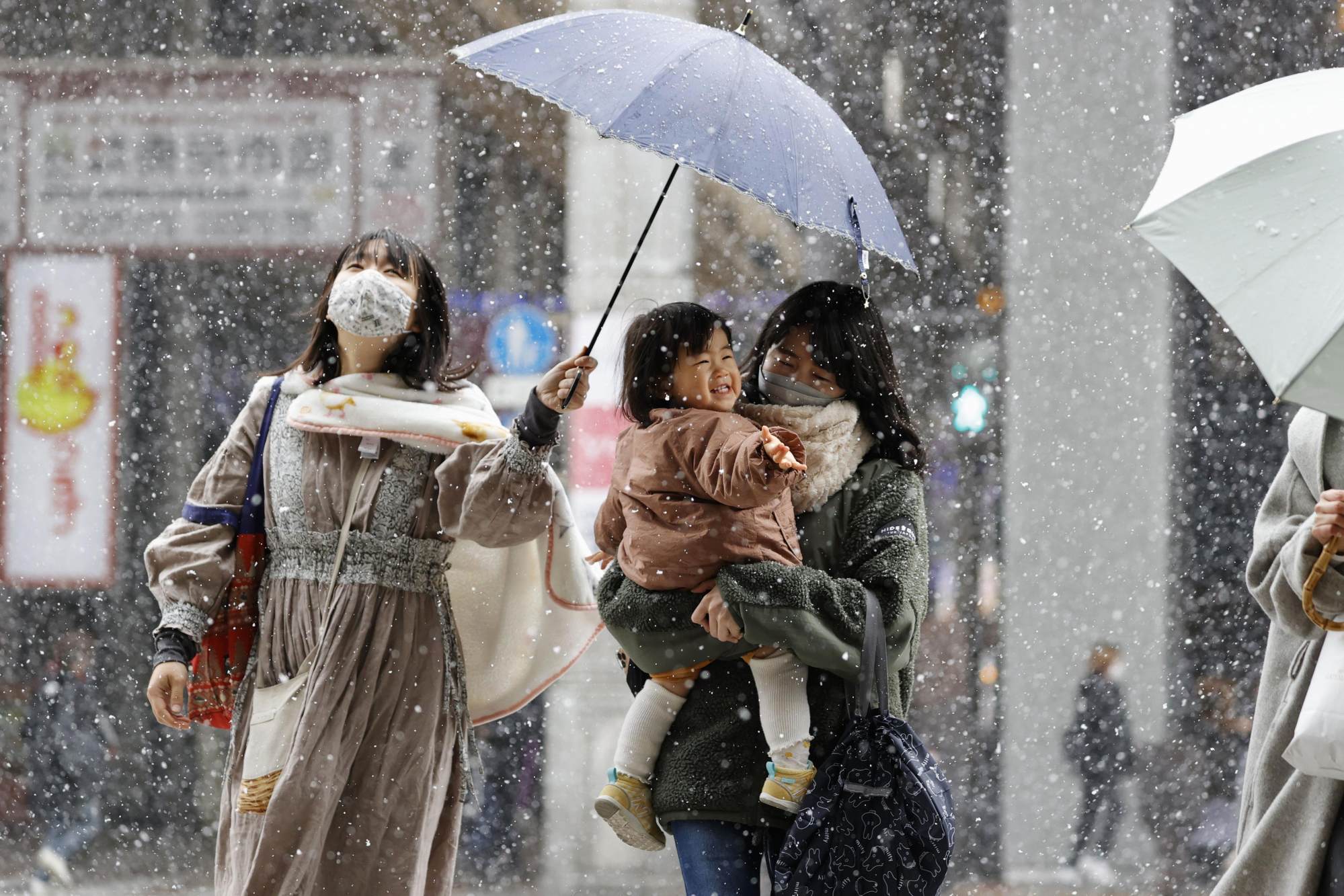 Kagoshima in southwestern Japan is also affected by the rare blizzard. Photo: Kyodo

The Japan Meteorological Agency has warned of a cold spell seen “only once in a decade” across wide areas of the country, especially in the western and eastern regions between Tuesday and Thursday, leading to power outages, traffic blockades and frost. Residents have been advised to stay indoors.

A video circulated online shows strong wind blowing into a JR railway station in Kyoto, which is partially outdoors, with passengers covering themselves in thick layers of clothing as snowflakes from the intense storm find their way into the facility.

Coronavirus: Hong Kong bosses taking no chances with infected workers even as mandatory isolation for Covid patients is axed

Enough of the cute: Hong Kong’s Year of the Rabbit stamps reflect a taste for tame public art

‘Hegemonic bullying’: Hong Kong hits out at US after ‘safe haven’ status extended

Coronavirus: top adviser echoes call for review of Hong Kong’s handling of Covid – but only after end to pandemic, and without targeting any official

Coronavirus: Hong Kong should decide for itself when to lift curbs, health experts say ahead of WHO decision on pandemic status

At least 150 flights between Hong Kong and Japan will be axed in the coming month as the country continues to impose limits on planes from the city. Cathay Pacific and HK Express announced on Monday they would each scrap up to 15 flights per week between February 3 ...

Hong Kong police have arrested two 14-year-old boys accused of using a cigarette lighter to set fire to a door curtain at the home of a schoolmate they had a dispute with earlier. Police and fire crews were sent to Block Three at Lei Muk Shue Estate on Lei ...

Around 90 per cent of government-run outpatient clinics were fully booked on Monday, while private doctors expected a surge of Covid-19 patients as mandatory isolation in Hong Kong ended. Bookings at 64 of 71 general outpatient clinics operated by the Hospital Authority (HA), where patients with Covid-19 and other ...

A seaman died and his 12 colleagues were rescued by firefighters from a blazing cargo vessel in Hong Kong’s southern waters on Monday. Emergency personnel were called in at about 8.45am when the blaze broke out on the vessel about two to three nautical miles (3.6km to 5.4km) southwest ...

Some people in Hong Kong have been acting suspiciously to get their hands on Covid-19 antiviral drugs, the Post has learned, with one person going to six doctors in a single day asking for the same medicine. The Hong Kong Medical Association confirmed it received “a handful” of reports ...

Hong Kong emigrants struggling to adapt to their new lives should reach out to the diaspora community for support, psychologists have said after the suicide of a 27-year-old woman who recently moved to London raised concerns about the hardships they faced. An inquest into the death of Fion Ho ...

Hundreds of Covid-19 patients will be allowed to leave isolation facilities in Hong Kong from Monday, as one of the last remaining pandemic control measures comes to end after more than three years. The city’s other main anti-epidemic measures – mandatory tests for travellers and a quota for mainland ...

Not just a shopping mall: as Hong Kong reopens, a time to fix old problems and chart new path

About 10 per cent of Hong Kong’s kindergartens at risk of closing amid emigration wave and low birth rate, teacher group warns

Not in the same vein: new Hong Kong blood therapy spares patients from hospital commute by allowing self-jabs in comfort of own home

Tired of lockdowns, protests and policy changes, Hongkongers in Shanghai weigh options to stay or leave

Legislation to block overseas lawyers from Hong Kong national security trials could be in force within 6 months, justice secretary says

Another round of consumption vouchers unlikely to revive Hong Kong economy without external stimulus, expert warns

Must Hong Kong regulate crowdfunding? Experts do not think it is necessary, as start-ups worry they will suffer

Hong Kong welcomes first babies of Year of the Rabbit, with new parents caught on the hop

Hong Kong’s economy could face ‘some difficulties’ in first quarter, but recovery in sight for city, finance chief says

6, including firefighter, taken to hospital after blaze at Hong Kong luxury block of flats