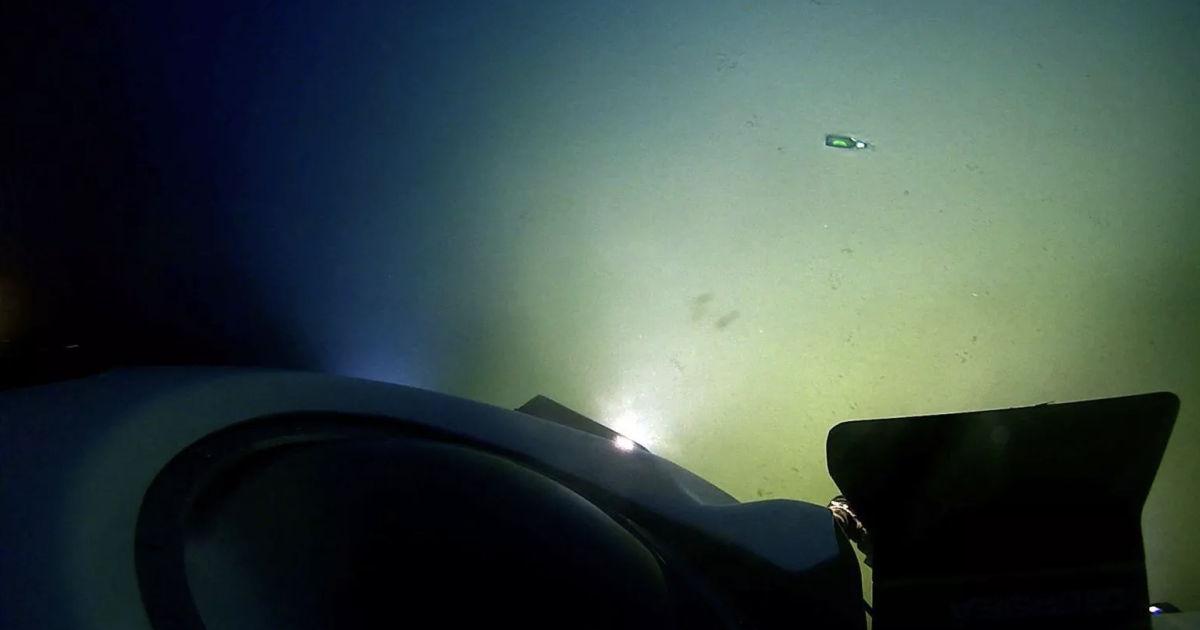 This summer, I descended more than 6.7 miles to the bottom of the Pacific Ocean in a two-seat submarine to the world’s deepest undersea chasm, the Challenger Deep in the Mariana Trench.

My goal was to explore a previously unvisited area of the trench and use high-resolution sonar to map that part of our planet in never-before-seen detail. We remarkably have far more detailed maps of the moon, Mars and Venus than we do of our own oceans.

The timing is critical. The ocean has absorbed more than 90% of the extra heat we’ve created since 1955 and 25% of our carbon dioxide emissions. But this capacity has limits, and the warming ocean can only take in so much of our emissions before it becomes more acidic and leaks carbon dioxide more quickly into the atmosphere. Using geographic information system (GIS) technology allows us to map these limits and solve a much larger puzzle: mapping the entirety of the ocean in detail by 2030.

GIS technology is perhaps “the most important weapon we have to fight climate change,” in the words of the White House’s special assistant to the president for climate policy. How could maps have such significant impact?

Every day, satellites capture an image of each square foot of land on Earth. The number of images taken is so large that the flood of data is beyond human comprehension. GIS takes in these images and translates the data into observations humans can understand, allowing us to more closely track large-scale changes to our climate. It pulls in data from spreadsheets, satellites and drone photos and displays it on “smart maps” that show us relationships, patterns and risks we may not have otherwise recognized.

The sonar data we collected in the Mariana Trench will be stitched together to create an elevation model as well as a visualization that resembles an aerial photograph, showing the shape of our deep seafloor. The bottom of the ocean is vital to our climate because heat travels through the undulating waters via paths shaped by the ocean floor’s topography. GIS makes it possible to map ocean terrain so that we can better understand how heat is moving. That, in turn, tells us how the heat will affect the water above and, eventually, the atmosphere and weather. More information on heat cycling through the ocean will help us understand when it fuels hurricanes, which research indicates have been intensified by climate change.

Beyond our waters, GIS can also show us where average temperatures are rising, by how much and what to do about it. It shows, for example, that by 2050 the most viable land for corn production in the U.S. will move from in and around Iowa — where temperatures are expected to rise by 7 degrees — some 350 miles northeast to Wisconsin.

We have this technology now. It’s not a gamble that needs to be built from scratch — scientists have been using it since 1963. But we have just recently begun to translate its potential into a crucial tool: publicly-funded online climate portals. These climate portals are digital collections in a single place, such as a website, that make environmental data and models publicly available.

California is already seeing the benefits of this approach with CA Nature, the public data site from the California Natural Resources Agency. It uses GIS to share and analyze data about land that’s already conserved, as well as land that could be conserved and would most help foster desperately needed biodiversity that is threatened by climate change.

California should share maps that include even more thorough data, extending to our oceans and tailored to the context of living in, working in and sustaining the world’s sixth-largest economy. The White House’s recently launched Climate Mapping for Resilience and Adaptation Portal lets users search climate data by address, census tract and county. Detailed state-level portals could complement this federal data to help tribes, regions and communities visualize local climate threats. Such information can connect areas seeking fixes with those that have already put solutions into practice to foster collaborations.

That’s what I’ve hoped to do in my undersea research. With a rare seat alongside explorer Victor Vescovo to dive to Challenger Deep, I helped carry forward the work of many co-collaborators aiming to better understand the entirety of our seas by 2030.

The dive also gave me a close-up view of something else, sitting in sediment at the bottom of the ocean at the Earth’s deepest point: a beer bottle. It had traveled more than 6.7 miles to the darkest depths of the Pacific, label still intact. This discarded trash had managed to reach an unsullied part of our world before we actually did — a symbol of how deeply and irrevocably humans are affecting the natural world.

Using mapping technology, we must get to know all the nooks, crannies, chasms and crevices of this planet, together, to fully understand the challenges in our changing world — and clearly see solutions.

Dawn Wright is the chief scientist at the digital mapping technology company Esri, a professor of geography and oceanography at Oregon State University and a member of the National Academy of Sciences. She is one of few individuals — and the first Black person — to visit Challenger Deep. Her latest book is “GIS for Science: Maps for Saving the Planet.”

Saddle Road could become impassable due to lava over the next few days (Picture: AP) Towns in Hawaii could be cut off if lava from the Mauna Loa volcano spreads further. The eruption has brought a surprise tourism boom during a slow season for the city of Hilo. Hotels ...


View more: Towns could be 'cut off' as lava threatens to swallow up roads in Hawaii

The Pierce County Council wants to debate the future of Canyon Road. They're too late

Dec. 3—OPINION AND COMMENTARY — Editorials and other Opinion content offer perspectives on issues important to our community and are independent from the work of our newsroom reporters. The damage has been done. The monster has been created. That’s why it’s so maddening now — many years later — to ...


View more: The Pierce County Council wants to debate the future of Canyon Road. They're too late

Glock 17 Okay, I can hear the big collective groan and see the big collective facepalm from our readers already. “Jeez-Louise, Chris Orr is writing yet another article about Glock pistols?? What can he say about them now that he hasn’t said already?!?!” Yes, I’ve already written ad nauseum ...

Finally getting around to cleaning out the attic? Before you toss out Grandma’s collection of brass reindeer and plastic lawn Santas, make sure they’re not worth a fortune. These Christmas collectibles are worth a small fortune. Vintage Christmas decorations turn into valuable collectibles over time. If you have any of ...

Apple looks to move business to India or Vietnam

As Tuvalu succumbs to rising sea levels, the island nation wants to be the first virtual country

'I Am Not A Bank': King Charles Refused To Take Prince Harry's Calls Asking For Money Prior To Queen Elizabeth's Passing

Noodle, the famous 'bones or no bones' pug, has died

Cats Vs. Inanimate Objects: Tweets That Tell A Tale Of Rivalry As Old As Tom & Jerry

This Plant Keeps Rodents Out of Your Yard

Why the USMNT Couldn’t Go Any Further

Bellingham woman accused of endangering an infant in freezing temperatures

Did Warriors coach Steve Kerr tamper with Alex Caruso after win vs. Bulls?

Founder of Gardner Village dies, was “a total creative and total entrepreneur”

Trump Most Likely to Be Convicted in This Investigation, Kirschner Predicts

This Is The Sorriest, Smoked Corvette C7 Z06 You Will Ever See

Trump demands 'termination' of Constitution so he can return to power