Oscars Love ‘Everything Everywhere,’ but Best Picture Race Is Far From Over 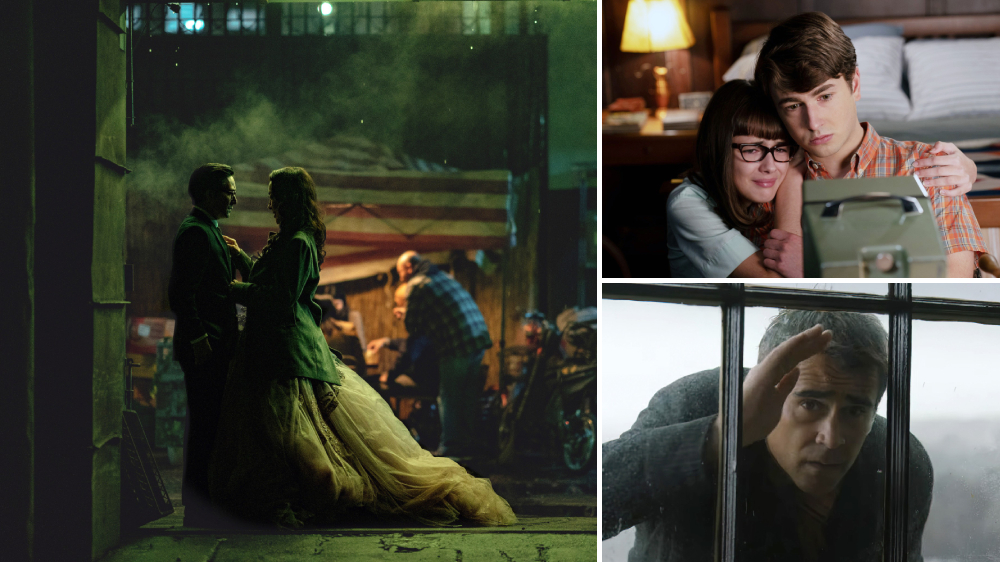 Oscars Love ‘Everything Everywhere,’ but Best Picture Race Is Far From Over

Tuesday’s Oscar nominations brought the jaw-droppers many expected. Some met with joy, and others with heartbreak.

Social media and awards pundit circles have been touting Daniel Kwan and Daniel Scheinert’s “Everything Everywhere All at Once” as an undisputed front-runner for most of the awards season. With a leading 11 nominations, it’s in an excellent position to win the best picture statuette for distributor A24, the same studio that pulled off the memorable “Moonlight” upset over “La La Land” at the 2017 show. A24 led the day for studios with a resounding 18 nominations, with Netflix in second with 16.

The multiverse flick landed expected noms for acting — Michelle Yeoh, Ke Huy Quan, Jamie Lee Curtis and Stephanie Hsu — but flexed in the artisan races like costume design, original score and original song. However, holding the title of the “one to beat” can bring the claws out of other studios and strategists who want to come out on top. Notably, in the expanded best picture era (since 2009), the film with the most Oscar nominations has won only four times – “The Hurt Locker” (2009), “The King’s Speech” (2010), “Birdman” (2014) and “The Shape of Water” (2017). But, before Film Twitter spikes the ball, this race is far from finished, with influential industry groups still to weigh in, such as DGA, BAFTA, PGA and SAG.

We love to look at the statistics or precursors that typically dictate an Oscar winner. Still, many have been broken in this era, most recently with “CODA” (2021), winning without noms for directing or any technical category, along with misses from DGA, which no film in the modern era has been able to achieve.

In Tuesday’s nominations, we witnessed a couple of these precursors crumble.

The best actor race is comprised of all first-time nominees — Austin Butler (“Elvis”), Colin Farrell (“The Banshees of Inisherin”), Brendan Fraser (“The Whale”), Paul Mescal (“Aftersun”) and Bill Nighy (“Living”). This hasn’t happened since 1934’s three-person lineup of Clark Gable, Frank Morgan and William Powell. Regarding who wins the category, Butler, Farrell and Fraser have each one a televised award, with BAFTA on the horizon. The British voting bloc seems to favor the Irish black comedy from Martin McDonagh, which could give Farrell the edge, but SAG will have the last word before final voting opens.

Aside from Farrell, “Banshees” had a strong showing, which, based on traditional standards for what wins best picture, is the only other film outside of “Everything Everywhere” with the precursor makeup to go all the way. Although Martin McDonagh made up for his “Three Billboards Outside Ebbing, Missouri” (2017) directing snub, finding a clear path to Academy success for “Banshees” is difficult. The director race looks like a battle between Steven Spielberg (“The Fabelmans”) and the Daniels. The original screenplay race is also favored for “Everything Everywhere” (even if it comes up short of best picture). The same British voting bloc that secured nine noms for “Banshees” could vote-split with the German war drama “All Quiet on the Western Front” and the Palme d’Or winner “Triangle of Sadness.”

“All Quiet,” which tied with “Banshees” for the second most-nominated, became the third remake of a former best picture winner to be recognized, following “Mutiny on the Bounty” (1962) and “West Side Story” (2021). The inclusion of Edward Berger’s powerful drama provided a resounding sigh of relief for Netflix after showing vulnerability with its other titles struggling on the circuit, like “Glass Onion” (only able to muster adapted screenplay), “Guillermo del Toro’s Pinocchio” (not able to capitalize on additional tech noms) and “Bardo” (overcoming mixed reviews to nab cinematography).

Universal Pictures’ “The Fablemans” had a good enough morning to keep it as a viable candidate for the top prize, with a few shortcomings (like cinematography and editing) that suggest the race is still on. Not only is Spielberg now tied with Martin Scorsese as the second most-nominated director ever with nine, but his personal drama marks his 13th movie to be nominated for best picture, which ties William Wyler as the director with the most films nominated.

For “The Fabelmans,” Michelle Williams’ best actress bid managed to get over the finish line. Still, with no other industry prize to be won until Oscar night and the strong showings for her competitors, Cate Blanchett (“Tár”) and Michelle Yeoh (“Everything Everywhere”), she’s likely a distant third (at best).

Speaking of best actress, the day’s shock was undoubtedly English star Andrea Riseborough for her turn as a Texas single mother who wins the lottery in Michael Morris’ drama “To Leslie” from indie distributor Momentum Pictures. The grassroots campaign was kicked into overdrive at the top of Oscars voting, where prominent members of the actors branch, including Amy Adams, Edward Norton, Charlize Theron and Kate Winslet hosted screenings. Riseborough has garnered much respect from the Hollywood community and cinephiles, with roles in past best picture winners like “Birdman” (2014). Her inclusion is worth celebrating and will likely inspire future campaigns from actors whose studios don’t have the financial means to mount awards campaigns for their performers.

“Elvis” performed on par with where experts had it projected, picking up multiple tech noms but missing out for Baz Luhrmann. However, the Australian auteur is nominated for best picture as a producer alongside his wife, Catherine Martin. Martin is also the most-nominated woman of the year, with additional noms in production design and costumes, both of which are within reach for the four-time winner. The biopic about the King of Rock and Roll also scored noms for cinematographer Mandy Walker, who also landed an ASC nom. This comes after the day’s most shocking snub of Claudio Miranda for “Top Gun: Maverick,” which was favored to run away with the prize. With Roger Deakins’ “Empire of Light” and Darius Khondji’s “Bardo” as the sole nominees for their movies, and Florian Hoffmeister (“Tár”) and James Friend (“All Quiet on the Western Front”) missing ASC, the category is in a state of flux. Only twice has a movie won cinematography without an ASC nod – “Glory” (1989) and “Pan’s Labyrinth” (2006).

Todd Field’s return to cinema after 16 years was embraced heavily by the Academy, with “Tár” snagging six massive noms, including two for artisans that many weren’t expecting. So naturally, this boosts Blanchett’s awards run to win her third statuette. Still, with the disappointing underperformance of women of color in lead actress, following the snubs of Viola Davis (“The Woman King”) and Danielle Deadwyler (“Till”), Yeoh could wiggle her way to the forefront of the tight race.

While the box office is robust for “Avatar: The Way of Water,” which recently crossed $2 billion, it pulled in a modest four mentions, down from the nine nods of the original. The other sequel, “Top Gun: Maverick,” took off with six, including adapted screenplay. But, of course, a preferential ballot can be a movie like “Top Gun’s” best friend — as we’ve known, it’s what’s “most loved” that wins best picture, rather than “most liked.”

Other notable mentions include Judd Hirsch breaking the record for the longest gap between a first and second nomination, long held by Henry Fonda. Hirsch’s first nom for “Ordinary People” (1980) came 42 years before his second supporting actor bid for “The Fabelmans.” Meanwhile, Angela Bassett’s nod for “Black Panther: Wakanda Forever” came with other love in the crafts and will likely provide an uninterrupted winning streak to the Dolby Theatre on March 12.

Regarding the actual ceremony, the Academy has a gift in the original song race with Lady Gaga (“Hold My Hand” from “Top Gun: Maverick”), Rihanna (“Lift Me Up” from “Black Panther: Wakanda Forever”), David Byrne (“This Is a Life” from “Everything Everywhere All at Once”), Sofia Carson (“Applause” from “Tell It Like a Woman” and the dancing sensations of NTR Jr. and Ram Charan (“Naatu Naatu” from “RRR”) on deck to (hopefully) all perform. The producers should curate the evening around these powerhouses.

For now, we venture forward into an elongated phase two.

The first winner predictions are below:

“Everything Everywhere All at Once” (A24)

Michelle Yeoh, “Everything Everywhere All at Once” (A24)

Ke Huy Quan, “Everything Everywhere All at Once” (A24)

“Everything Everywhere All at Once” (A24) – Daniel Kwan, Daniel Scheinert

“All Quiet on the Western Front” (Netflix) – James Friend

“All Quiet on the Western Front” (Germany)

“The Boy, the Mole, the Fox and the Horse” (Apple TV+) – Charlie Mackesy and Matthew Freud

For more stories like this, follow us on MSN by clicking the button at the top of this page.

George Santos Stepping Down From His Committees: Reports

15 Ways To Use Fireplace Ash

The side of an OPP vehicle is seen in this file image. An Arkona, Ont., resident is facing multiple charges after multiple police officers were assaulted during an arrest late last week. On Friday at 6:15 p.m., Lambton County OPP were contacted after a man was seen causing “significant ...

Super Bowl 57 DraftKings Picks: NFL DFS lineup advice for Eagles-Chiefs Showdown tournaments The NFC and AFC’s top seeds face off in the final game of the 2022-23 NFL season when the Eagles meet the Chiefs in Super Bowl 57. Sadly, this marks the last time NFL DFS players ...

Runions was declared a dangerous offender after the Calgary man pleaded guilty to a string of violent crimes during a month-long spree in July, 2017. The Calgary judge who locked up dangerous offender Dillion Richard Runions indefinitely failed to properly consider his future risk, the province’s top court ruled ...

lakeland-shooting.png At least 10 people were injured in a drive-by shooting on Monday afternoon in Lakeland, Florida, police said. They were still looking for the shooters Tuesday morning. Lakeland Police Chief Sam Taylor said at a news conference Monday evening that investigators believed the shooting was targeted, not random. ...

The City of Ottawa is continuing a workplace harassment investigation into an alleged attack on the fire department’s first openly non-binary firefighter, even while there are active criminal charges laid in the case. The city quietly resumed the investigation despite the firefighters’ association initially saying the department would wait for ...

Muhammed Abu Marzouk was rushed to St. Michael’s Hospital in Toronto, where he underwent multiple surgeries. Two men charged after a Mississauga father of two was beaten within an inch of his life in 2018 have been found guilty of aggravated assault but not guilty of attempted murder. Janis Corhamzic ...

For a client of Halifax tattoo artist Phoebe Russo, body art is more than decoration. “For a while, I looked at my scars and decided it was to be a constant reminder of how bad things became — a visual diary of the consequences of self-harm and hesitation wounds,” said ...

Santos stepping down from committees amid ethics issues

Bills GM has one criticism for QB Josh Allen

Nick Saban Has Reportedly Reached Out To Prominent Coach

The best, worst, and likeliest outcomes of the blockbuster Bo Horvat trade

US Rep. Santos to recuse himself from committee assignments, lawmakers say

Jim Harbaugh could push Broncos right back to Sean Payton

Joe Jonas Jokes After Receiving Walk Of Fame Star: ‘If We Break Up, Does It Split In Threes?’

911 services back up after about an hour of disruption

Man arrested after robbery at business in Lindsay: police

DeSantis claps back at Trump criticism: 'In my case ... we won'

'Not all dogs fare well in winter': Signs of struggle, what to do

How the Bo Horvat trade affects the Leafs?