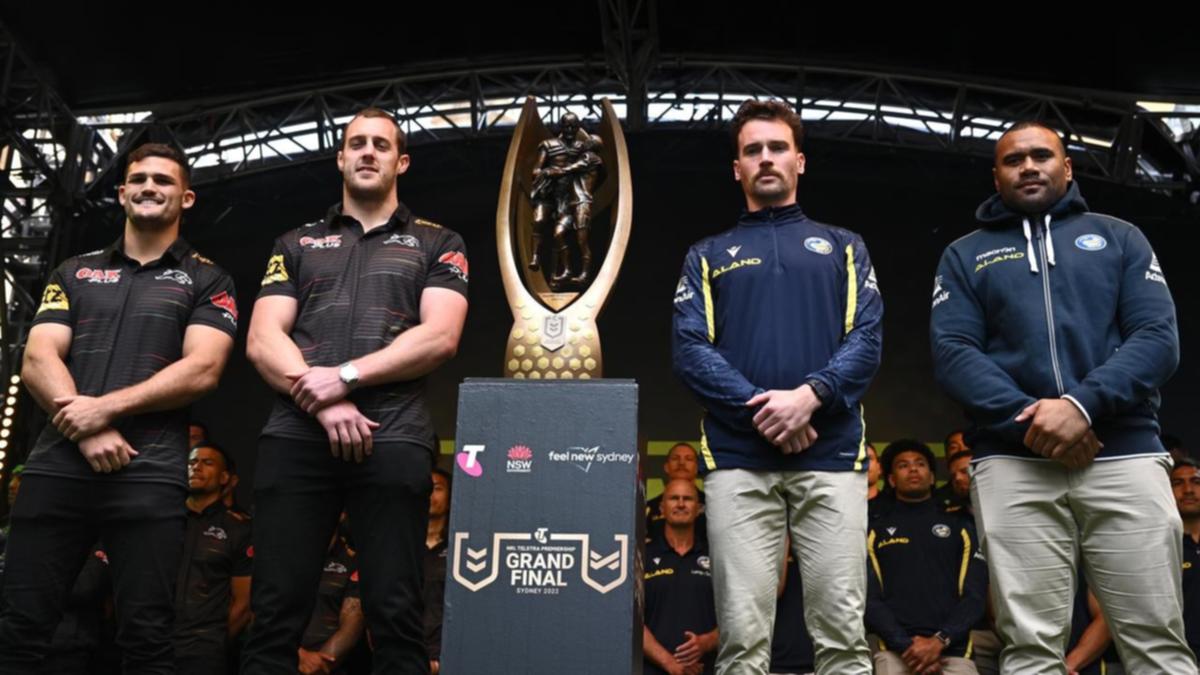 Penrith stand on the verge of accomplishing the greatest three-year streak since Parramatta's side of the 1980s, with only the modern-day Eels standing between the Panthers and further history.

Only the seventh salary-cap-legal team to reach three consecutive deciders in the past 50 years, Penrith have won a remarkable 66 of the 77 games they have played since the start of 2020.

Penrith players have spent the week damping down talk of a dynasty, instead eyeing a shot at successfully defending their title.

“For us, next year is next year. But we need to make the most of this opportunity.”

In reality, Penrith are already in the midst of a dynasty.

Of the other six teams to have reached three straight grand finals in the past 50 years, Penrith's winning rate of 85 per cent is by far the best, while their average winning margin of 13.34 narrowly beats out the Manly team of the mid-1990s.

The only blip on Penrith's radar remains their first-half crushing from Melbourne in the 2020 decider, when they could be accused of stage fright.

“We did learn from the first one,” coach Ivan Cleary said.

“I don't know whether that was the team we were playing, the occasion, or both.”

Parramatta will have to gain that experience on the run.

Of the Eels, only Ryan Matterson and Bailey Simonsson have played in grand finals before while coach Brad Arthur has previously featured as an assistant, in 2013, and under-20s coach in 2009.

They have remained the story of the week, desperate to end the longest current drought in the NRL and one that stems back to their great sides of the 1980s.

Eels' players have made a point of embracing the history with Mitch Moses speaking of his heartache at watching Parramatta's last grand-final loss in 2009 and his desire to be the No.7 to break the drought.

But Arthur has warned the emotion must subside by Sunday, as Parramatta go back to the formula that has helped them beat Penrith three times in the past three years.

Most notably, it comes in the form of pressuring Nathan Cleary's kicking, limiting Isaah Yeo's time with the ball and maintaining their own offload rates.

“We know what's at stake. We've kept it as simple as we can. It's a big game, but it's another football game.

“And we're the only ones who can take control of that.”

HOW THE GREAT SIDES OF THE PAST 50 YEARS STACK UP:

West Indies could be forced to give a debut to pace bowler Marquino Mindley just 48 hours after getting off a flight from the Caribbean as the tourists battle several injuries in Adelaide. Veteran quick Kemar Roach (hamstring), young seamer Jayden Seales (knee) and No.3 bat Nkrumah Bonner (concussion) ...

The Australian Professional Leagues will use the Socceroos' World Cup performance in Qatar to push the government for funding for the A-Leagues' academy programs. According to data presented in an APL report to mark two years since their split with Football Australia, 65 per cent of the Socceroos squad ...

Only one man in the Australian squad was more disappointed with Lance Morris missing out on a test debut than the 24-year-old himself, and that was Cam Green, who copped the quick in the nets after the call was made. Scott Boland’s inclusion for the Adelaide test at the expense ...

Aaron Finch insists talk of his cricketing demise is premature and is adamant there remains plenty of “love” for an Australian team which has been deemed unpopular with supporters. Australia’s 36-year-old T20 captain on Wednesday dismissed suggestions the upcoming BBL season would be his farewell campaign with the Melbourne ...

Wayne Bennett has confirmed the Dolphins have five positions left in their roster for 2023 as the new NRL franchise continues negotiations with Brisbane fullback Tesi Niu. Coach Bennett was at the helm of the club's inaugural open training session attended by 600 fans on Wednesday. With less than ...

West Coast coach Adam Simpson is hopeful his North Melbourne counterpart and friend Alastair Clarkson will be given the green light to coach against him in round one of next season's AFL. Clarkson and Brisbane coach Chris Fagan are currently at the centre of an independent investigation into claims ...

NRL star Tom Starling was held in a chokehold while a police officer punched him in the ribs during a violent affray, a court has been told. The Canberra Raiders hooker and his brothers have fronted court to fight allegations about their roles in a massive brawl at a Central ...

Amy Jones and Sophia Dunkley have made half-centuries as England beat West Indies by 142 runs in Antigua to go 2-0 up in their three-match ODI series. England won the toss and chose to bat, with Tammy Beaumont and Emma Lamb making 37 off the first eight overs before ...