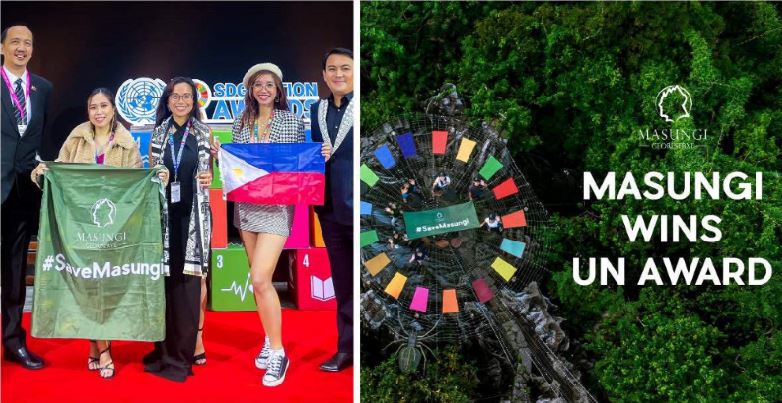 The Philippines’ Masungi Georeserve has won the 2022 United Nations Sustainable Development Goals (UN SDG) Action Awards for its youth-led movement to save the environment and fight against deforestation.

The Masungi Georeserve forest park in Rizal province bested over 3,000 entries from around the world and was announced the winner of the Inspire category in a special ceremony in Bonn, Germany on September 27, 2022.

The judges of the UN SDG Action Awards commended the activists, rangers, and environmental defenders of Masungi Georeserve who passionately fight against deforestation and other environmental threats despite the risks to their lives.

“Our judges commended this youth-led movement that protects our most precious natural resources, for being strong and bold enough to participate in national legislative inquiries and direct lobbying,” the UN SDG Action Awards’ website stated.

The judges of the UN SDG Action Awards commended the activists, rangers, and environmental defenders of Masungi Georeserve who passionately fight against deforestation and other threats despite the risks.

The conservation group led by sisters Billie and Ann Dumaliang, trustees of the Masungi Georeserve Foundation, is dedicated to the restoration and protection of the Masungi landscape and parts of the Upper Marikina Watershed.

In her acceptance speech, Billie Dumaliang thanked the United Nations and the UN SDG Action Campaign for awarding Masungi “this incredible honor.”

“You don’t know how much this means to us, at such a critical time when our work continues to be undermined and under-supported in our home country,” Dumaliang said. She also dedicated the award to her team and Masungi rangers, who earlier won a global conservation award for their courage despite risks to their lives.

Dumaliang also dedicated the award to the “quarry companies, land grabbers, and their enablers in government” which she said the team will continue to challenge.

“To the people who have said that we are dreaming too big, that this is the way things have always been, and that we are pushing too far. This is for you. This is a reminder that we will not stop. That we will win in the end with our energy and creativity,” Dumaliang adds.

According to a statement released by the Masungi Georeserve Foundation, quarrying companies with Mineral Production Sharing Agreements (MPSAs) pose the biggest threat to their efforts.

“Masungi continues to call on the government to finally cancel the large-scale MPSAs covering more than 1,000 hectares of critical watershed and protected areas. These MPSAs are held by sister companies Rapid City and Quarry Rock, which possess multiple MPSAs in Rizal Province,” a statement released by the Masungi Georeserve on its website said.

The Masungi Georeserve has won numerous international awards and recognition, including the inaugural global Water ChangeMaker Awards and the United Nations World Tourism Organization (UNWTO) Awards for Enterprises, among many others.

SEND CONGRATULATIONS in the comments below to the Masungi Georeserve conservation team for winning the 2022 United Nations Sustainable Development Goals (UN SDG) Action Awards and SHARE this article to show your support for activists, rangers, and environmental defenders who are fighting against deforestation and other threats.