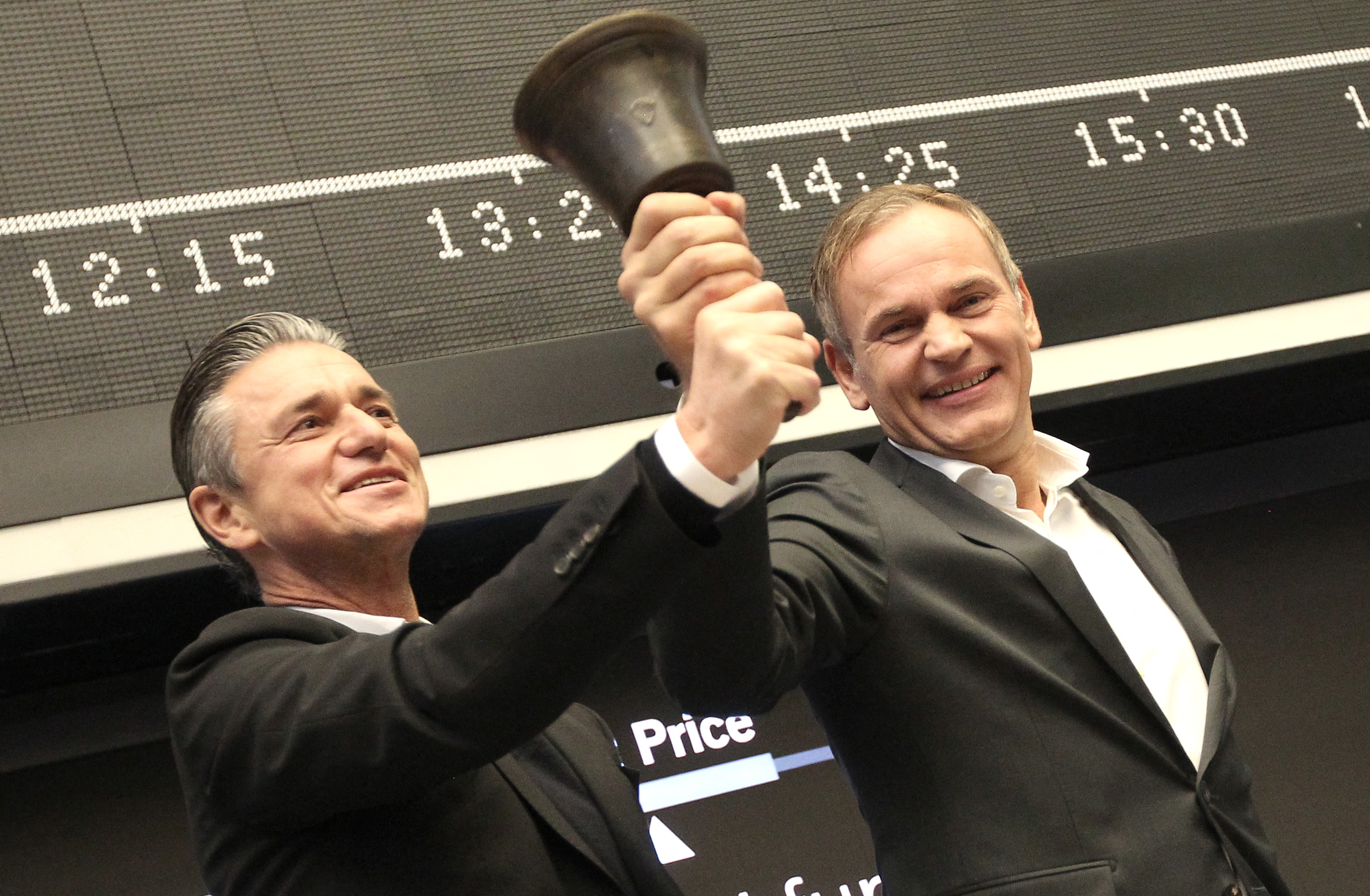 Europe celebrated its largest initial public offering in over a decade after shares in luxury sports car manufacturer Porsche began trading on Thursday.

Parent company Volkswagen Group pushed through the listing of its 75% owned subsidiary despite poor conditions in part prompted by this week’s chaos in U.K. currency and bond markets.

VW managed to secure a price at the very top of its indicated IPO range, after investors including a number of sovereign wealth funds subscribed to the stock for €82.50 each, valuing Porsche at roughly €75 billion ($72.5 billion).

Volkswagen raised €9.4 billion in proceeds from the sale of a 25% stake in Porsche’s non-voting shares, making it the largest IPO issue since Swiss commodities firm Glencore listed in 2011.

He added the proceeds would accelerate his company’s transition toward vehicles powered by electricity rather than gasoline and defined as much through their programming code as their nuts-and-bolts mechanics. Tesla is presently far ahead of VW in terms of software expertise.

The IPO was only possible after Volkswagen execs were able to tap into the vast wealth of the industrial dynasty that controls it. At the behest of VW’s management, the Porsche and Piëch clans are borrowing heavily to finance the €10.1 billion purchase of a further 25% stake in the company’s non-listed ordinary shares, enough for a blocking minority.

Between both transactions, Volkswagen is set to rake in a total of €19.5 billion in gross proceeds and €9.95 billion net after it shares half of the spoils with its shareholders in the form of a one-off bonus.

The VW dynasty’s twin patriarchs, Wolfgang Porsche and his cousin Hans Michel Piëch, said the IPO was a win-win for all involved.

“The proceeds will accelerate Volkswagen AG’s transformation, its shareholders will receive a special dividend payment and Porsche AG will gain more entrepreneurial freedom,” they said in a joint statement on Friday.

Volkswagen had been hoping to market Porsche much the same as Ferrari did years earlier — as a luxury consumer good that enjoys higher valuations compared to a conventional incumbent carmaker like a General Motors.

Even though Porsche only sold about 300,000 cars last year, a tiny fraction of the 8.9 million sold across the entire group, it is VW’s undisputed cash cow. The luxury brand’s €5 billion in earnings contributed roughly a quarter of Volkswagen’s annual consolidated operating profit.

Early in trading, Porsche shares trading on the Frankfurt exchange under the ticker symbol P911 hit €84.70. Experts say the minimum threshold for whether an IPO can be considered a success is whether the stock closes the first day above its issue price, in Porsche’s case that would be above €82.50.

At this valuation Porsche ranks as the fifth largest carmaker in the world by market capitalization, ahead of Mercedes-Benz, GM and Ford.

This story was originally featured on Fortune.com

Ford may extend its lead in commercial EV sales

Electric cars sales boom in November but 'big question marks' over how long it can last, says expert

Tesla drivers are feeling the brunt of anti-EV sentiments: report

Apple scaled back its self-driving car, dubbed Project Titan by employees, and plans to debut it in 2026, Bloomberg reported, noting that the project has been in limbo for the past several months. After realizing that a fully autonomous vehicle without a steering wheel or pedals isn’t possible with ...

Volkswagen is keeping its promise of making software improvements to the ID.4 crossover. The company announced a comprehensive round of digital updates that includes new features for the infotainment system and more information displayed in the instrument cluster. The updated software was developed for all 2021 and some 2022 ...

Volkswagen is finally beginning to update the VW ID.4 software, and they are starting by adding over-the-air (OTA) update support along with other necessary features. Over the past two years, Volkswagen has been heavily criticized for its lack of software improvements and dedication to the software in pre-existing products. ...

Polestar is launching a downloadable Performance Upgrade for drivers of the Polestar 2 all-electric vehicle in North America. The upgrade will increase the Polestar 2’s Long Range Dual Motor trim level horsepower rating by 68 to 476. Meanwhile, the vehicle’s 0-60 MPH acceleration rate has improved to 4.2 seconds ...

Tesla begins Model Y deliveries in Taiwan with Berlin-built units, but why?

Tesla has expanded the Model Y to Taiwan, but a tricky situation with China’s exports makes it clear the vehicles are not coming from Gigafactory Shanghai. Tesla officially announced on its Twitter account for the Asian market that all-electric crossover Model Y deliveries had started in Taiwan earlier this ...

Mercedes has opened its first electric vehicle only dealership to capitalize on the fledgling demand for EVs in Japan. Mercedes has been steadily growing its EV lineup, particularly in Europe and China, where demand for these vehicles is the strongest. But now that the company offers a full EV lineup ...

StoreDot announced that its groundbreaking extreme fast charging “100in5” electric vehicle battery cell had its technology successfully validated by a leading, independent battery lab in Israel. On Tuesday, StoreDot confirmed the Shmuel De-Leon Energy battery lab successfully confirmed the “100in5” cell’s commercialization viability and its superior fast-charging ability, as well ...

Tesla is making major changes to the overall look of its Model 3 lines at the Fremont Factory in preparation for the revamped design of the all-electric sedan, codenamed: Project Highland. Tesla has filed for several revisions of the Model 3 lines at Fremont, according to documents found by Teslarati. In ...

Cupra to build the Tavascan in China for global markets

3 of the Best Electric Cars According to iSeeCars

Volkswagen Amarok is going to be electrified by 2025 - but will it be plug-in hybrid or battery electric?

Celebrating The Urban Outlaw, 10 Years On

Tesla Thailand to be officially launched on December 7th

Tesla Semi wows the crowd at the Modesto Christmas parade

Countries with the cheapest electric cars

Another out of control Tesla Model Y in China crashes, killing two

Redwood Materials approved for over $100m in tax incentives

Rivian tackles a bedbug problem at its Normal, IL factory

Ford achieves CEO Jim Farley’s goal of being No. 2 in EVs

How Much Does a Fully Loaded 2023 Volkswagen ID.4 Cost?

Tesla Semi developers reflect on first deliveries: ‘Out the door. For the world.’

Volkswagen commits to searching a Gigafactory site in Canada