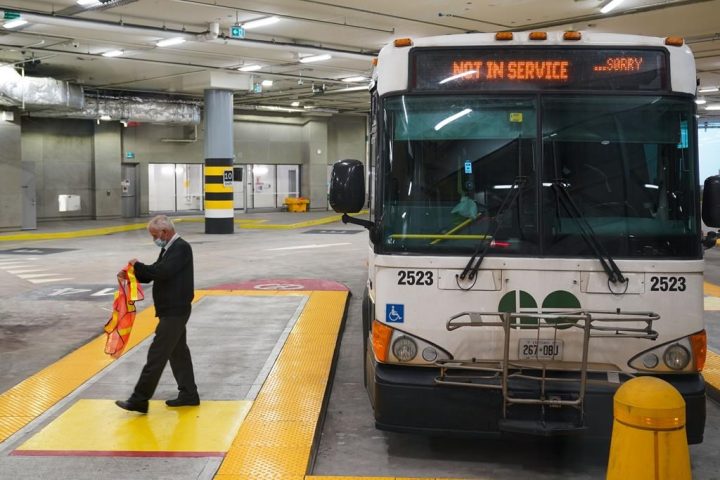 A bus driver disembarks a GO Transit bus at the new Union Station Bus Terminal in Toronto on Tuesday, November 2, 2021.

The union representing 2,200 GO Transit workers is warning commuters to “prepare for possible disruptions” with a strike expected in the coming weeks unless a deal is reached.

In a statement released Friday, the Amalgamated Transit Union Local 1587 announced that its members are set to go on strike later this month due to a “total lack of progress” with transit agency Metrolinx.

“Metrolinx has been wasting our time for months, and has made zero offers addressing our priority issue, which is binding language that would provide our members with greater job security and protection against contracting out,” ATU Local 1587 president Rob Cormier said.

Cormier noted that in August, Local 1587 members voted 93 per cent in favour of a strike, marking the largest mandate and turnout in its history.

“We have given Metrolinx more than enough time to bargain a fair deal. We are no longer optimistic that they will come to the table with a fair offer in hand unless they are forced to through a work stoppage,” Cormier said.

Cormier said that a strike would not take place over the week of Thanksgiving to avoid disrupting holiday travel.

“I do want to make clear, however, that the riding public should prepare for possible disruptions to their commute in October,” he said.

ATU Local 1587 said it had its last meeting with Metrolinx on Monday and no additional bargaining dates have been set.

The union said this week it met with other ATU locals in representing transit agencies in the GTA to discuss the impact picket lines could have on their routes.

“ATU members in Mississauga, Brampton, and Hamilton have the right to refuse to cross picket lines enshrined in their collective agreements, and the local representing TTC workers has requested that the agency not ask its workers to cross any GO Transit picket lines,” the union said.

The union didn’t provide a possible start date for the strike.

Global News has reached out to Metrolinx for comment.

NYPD officers, bystander save man who fell on subway tracks Two New York City police officers raced to save a man who fell on the tracks at a Manhattan subway station, plucking him out of the way of an oncoming train in a daring rescue captured by an officer’s body ...