Three downtown establishments in St. John’s fell victims to a rash of robberies last weekend, according to police — and owners say a sense of safety in the area is quickly deteriorating.

The string of crimes is the latest blow to the area, which local business owners and performers say has grown more dangerous in recent months.

One of the robberies, at George Street music venue The Rock House, was caught on tape.

“The bartender was working, he was getting ready to close up his cash. A couple of young fellas … ran in, both of them with knives, and took money out of the cash, took the young fella’s wallet and they ripped all the electronics out and they were gone in 37 seconds,” says Colin Dalton, who owns The Rock House and several other downtown venues.

The thieves got away with about $600 — not a huge haul, due to most patrons using electronic payments, Dalton says.

He suspects poverty may have been a motivating factor.

“Some of these people are just looking to get put in jail for three months, get off the street because it’s cold,” Dalton said. “They’re not getting any real money.” 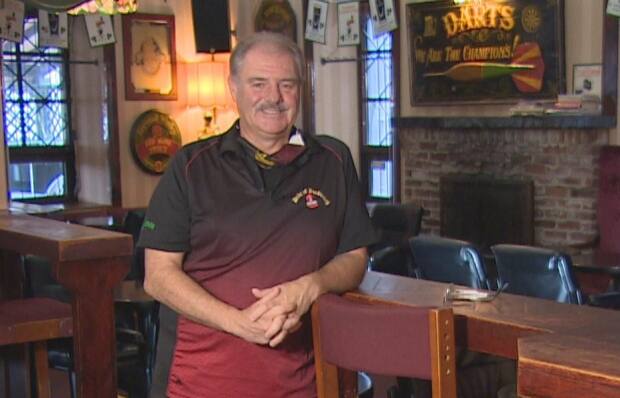 Colin Dalton, who became a co-owner of The Duke of Duckworth in 1990, has worked at the pub since it opened in 1987.

Dalton says he’s seeing more people experiencing mental illness and addictions gathering on downtown streets, able to tuck themselves away in alleys and behind buildings. The George Street stage, he says, has turned into a regular shelter for some.

His observations come amid warnings from a St. John’s shelter operator this week, who told CBC News the organization was turning away hundreds of women in recent months, and skyrocketing demand at The Gathering Place, which offers shelter beds and hot meals to people experiencing homelessness.

Dalton says police presence in the area does nothing to prevent the apparent uptick in crime, and suggests an increase in mental health services might be a good first step.

“They need help. That’s the first thing,” he said.

Within a day of the George Street robbery, another bar, one street over, also described a brazen attack on its staff.

Mike Angelo, who owns Lucy’s on Duckworth Street, said a man ran inside the bar and doused a customer and the bartender in bear spray while brandishing a knife.

He then broke open the cash register by throwing it on the floor, and ran off with the money, Angelo said.

“It’s pretty bad. I could still feel it yesterday after my young fella cleaned up the place,” he said.

“It was a mess. Frightening for the [bartender].”

The Royal Newfoundland Constabulary confirmed they’re still investigating the two bar robberies, but have a possible suspect for a third robbery allegedly committed on Sunday night at a Water Street fast food venue.