It’s almost 40 year since Redditch was blessed with world famous artist Eduardo Paolozzi’s mosaics in its new Kingfisher Shopping Centre. Now an anniversary survey to find out how local residents feel about the iconic artwork has unearthed some surprising results.

It’s clear there’s a lot of love across the Worcestershire town for the colourful mosaics, now worth several millions of pound, as 97% of responders said they like them and 95% thought they should be celebrated. But funny and sentimental comments also came flooding in.

Acclaimed Sir Eduardo Paolozzi was a pioneer of ‘pop art’ who created statues outside the British Library and was commissioned to create 12 mosaic panels high up in Redditch’s Milward Square. He included a theme of the town’s history with needles along with motifs he became famous for, including disjointed heads and an astronaut.

One resident retorted: “I’ve never thought they were about Redditch. I always thought it was some weird, techno, funky, futuristic, trippy space dream.”

Another said: “I love how they are hidden in plain sight to be honest – pop culture and echoes of brutalism above the heads of shoppers.”

One Kingfisher regular added: “They are a vibrant piece of modern art that we are incredibly lucky to have in Redditch. 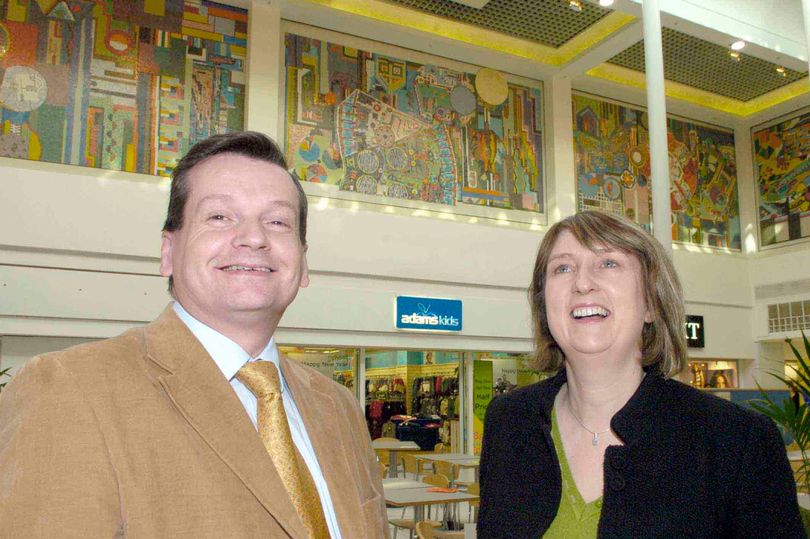 “The technological history of our town and our times through the eyes and imagination of one of the foremost ‘Pop Artists’ of all time. They are beautiful, strident and unique.”

The unique mosaics, above the Range, Next and Coffee #1 stores in the shopping centre, will be 40-years-old in April 2023.

Shoppers can see the full range of responses and survey results in a Pop-Up Gallery in Kingfisher Shopping Centre until December 4 next to Clinton Cards.

Of the residents surveyed, 43% thought the works were not visible enough and suggestions that reproducing the mosaics in other spots could make more people notice them.

Redditch Borough Councillor Jo Beecham, who leads on leisure and cultural services, said: “The Paolozzi Mosaics are an important part of our cultural history.

“So I am pleased that some of the initial findings from this survey suggested that there is still a strong affinity to the works among respondents.”

Niall Gallen, a researcher at the University of Birmingham, carried out the survey and will be at the Pop-Up space on Saturday December 3 from 10am to 4pm for anyone who wants to discuss the mosaics and celebrations further.