The proportion of students who achieved the top A-level grade of A* has doubled since before the pandemic.

Hundreds of thousands of pupils across England, Wales and Northern Ireland are receiving their results today (18 August), after they were the first cohort to physically sit exams since the coronavirus outbreak in March 2020.

Results show that the overall pass rate is lower than in 2021 and 2020, when grading systems were altered due to the pandemic, but that the proportion of students receiving top grades has soared since 2019.

In 2021, the percentage of those who received A*s sat at 19.1%, but education experts have said grades were expected to be lower than last year – when pupils were assessed by their teachers.

He said it was “always” the plan to have grades reflect pre-pandemic results.

“That is going to be seen this year,” Mr Cleverly continued, “so students might get slightly lower grades than perhaps they were expecting.” 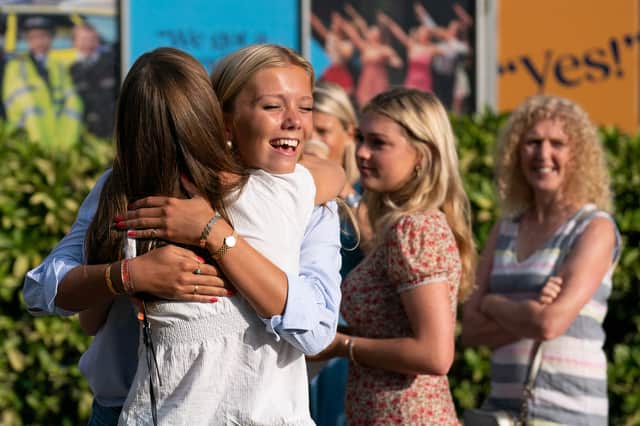 Lila Hallam celebrates with her friends after opening her A-level results at Norwich School, Norwich.

In 2020, teachers submitted predicted results for pupils to exam boards, and students were then given grades based on a controversial formula devised by England’s exams regulator, Ofqual.

The new system received huge backlash, after around 40% of A-level results were downgraded, prompting the Government to take a U-turn on the way in which grades were decided.

Pupils in Scotland received the results of their Highers last week, with results showing a similar trend in that the pass rate was down on last year but above pre-pandemic levels from 2019.

When it comes to subjects specifically, the highest pass rate was in Irish – a subject only taken in Northern Ireland.

Excluding this, the subject which most students passed was German.

ICT had the lowest pass rate, while ‘other modern languages’ – which does not include Spanish, French, German, Irish or Welsh – saw the highest proportion of A*s and As.

The lowest proportion of A*s or As was in ‘health and social care – double award’. 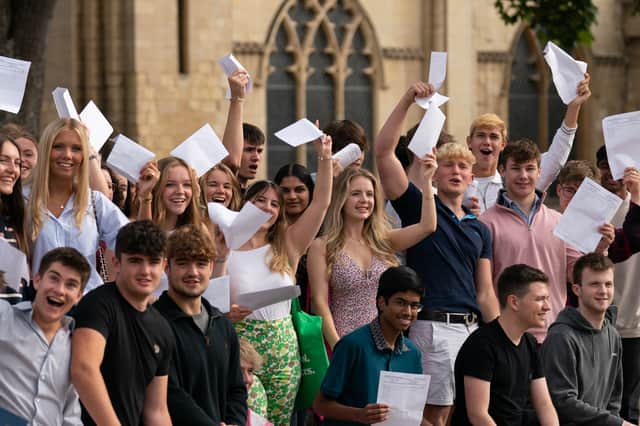 This subject however was only taken by 886 students, so, the next lowest proportion of top grades was seen in English Language.

Maths was once again the most popular A-level, with Psychology coming in at second place.

English Literature saw the biggest drop in candidates for a single subject, meaning it fell out of the top ten most popular subjects for the first time in history.

Kath Thomas, interim chief executive of the JCQ, said the results “represent a huge milestone” in the UK’s recovery from the pandemic.

She congratulated this year’s cohort, commenting: “Not only is it the culmination of two years of hard work, but these students are the first to have taken formal summer exams in three years, so we should all celebrate this achievement.”

Ms Thomas added that the results were a “testament to the diligence and resilience of young people and school staff across the country”.

She explained that the drop in pass grades from 2021 reflects the special arrangements that were put in place to support students through “another challenging year due to Covid”.

Results also show that a record number of students will be taking up a place at a UK university this year – with more disadvantaged students than ever before receiving a place.

Dr Jo Saxton, chief regulator of Ofqual, said: “I felt strongly that it would not have been right to go straight back to pre-pandemic grading in one go but accept that we do need to continue to take steps back to normality.

“These results overall, coming as they do broadly midway between 2021 and 2019, represent a staging post on that journey.”

Cleaner dies after lorry reverses into him in Hougang; workplace deaths surpass 2021 figure

A splendiferous home! Grade II-listed thatched cottage where Roald Dahl's mother and sister escape WW2 bombings and was mentioned in his autobiography Going Solo goes on the market for £599,950

Where Else You've Seen The Conners' Sara Gilbert On TV

Kadarius Toney will miss London clash with yet another hamstring injury

12 Best Shows Like The Serpent Queen You Should Check Out

Did You Get A Chicago Parking Ticket Recently? You're Not Alone. Ticketing is Up 25.7%

In 'TÁR,' Cate Blanchett delivers a tour de force as a musical genius corrupted by power

Since Todd Field’s newest masterwork, “TÁR,” had its world premiere at the Venice Film Festival in early September, the filmmaker and his stars have shared a common message during interviews: It’s cinema’s job to pose difficult questions, but it’s the audience’s responsibility to answer them. The questions asked in “TÁR” ...

2-year-old boy nails cheer routine alongside big sister Liam, 2, knew the routine after watching his older sister practice at home. A 2-year-old boy in Texas is going viral for his impressive cheerleading moves. Liam, of Pflugerville, Texas, was captured on video cheering on the sidelines of a football game ...

Al Drago/Pool via AP Nebraska Sen. Ben Sasse is the sole finalist to become president of the University of Florida, the school said Thursday, and the Republican senator indicated he will take the job — meaning he will likely resign in the coming weeks. The school said in a ...

One of the constant rules of thumb in video gaming is that no matter the quality of a Sonic game, the soundtrack is almost certainly going to be fantastic. Sonic Frontiers will hopefully be no different and it seems like Sega is throwing its full weight behind it’s audible delights, ...

Podcast: Are Hawks making right call by sending Reichel to AHL? originally appeared on NBC Sports Chicago On the latest Blackhawks Talk Podcast, Pat Boyle and Charlie Roumeliotis discuss the organization’s decision to send down Lukas Reichel to Rockford for the start of the season. Are the Blackhawks making ...

This Dahmer-morabilia costs an arm and a leg. With interest in Jeffrey Dahmer skyrocketing thanks to the hit Netflix miniseries, an enterprising hawker is cashing in on the craze spurred by selling the serial killer’s alleged urn, along with Dahmer memorabilia. “The Milwaukee Monster’s ash vase is the rarest true ...


View more: You can buy Jeffrey Dahmer’s urn for $250K

New York Post Composite Whenever we hear the name “Dyson,” it just sounds regal. But, we don’t love paying high prices all the time (or ever). Luckily, ahead of the Amazon Prime Early Access Sale — which is taking place on Tues., Oct. 11 and Wed., Oct. 12 — ...

ANALYSIS: Time for some Jets games that mean something

View image in full screen The Jets finish their pre-season tonight in Calgary, and it’s not a moment too soon. Don’t get me wrong, I am thrilled that the NHL is back and we will soon be immersed in more than 1,200 regular season hockey games — hockey games ...


View more: ANALYSIS: Time for some Jets games that mean something

Texas-OU Weekend Has Arrived in Dallas

Dodgers Dugout: Is it better to play the Mets or Padres?

Paul Heaton and Jacqui Abbott tour 2022: music duo praised for £30 ticket cap - dates and how to get tickets

The first hints of Gisele Bündchen-Tom Brady trouble go way back: ‘She was dead serious’

Pinhead's Biggest Differences Between Hulu's Hellraiser And The 1987 Original Film

Samantha Womack: does EastEnders star have breast cancer? What actress has said about chemotherapy treatment

Is there a Jeffrey Dahmer movie? How to watch My Friend Dahmer on TV, who’s in the cast, trailer

Charges Filed Against Man Who Pointed Gun at Officers, Staff Inside CPD Station

Here's Where the Jobs Are for September 2022 – in One Chart

Keeping Up with Change

‘Nothing too minor to stop them’: NYPD ticketing migrant buses from Texas

Maids in S'pore must get one mandatory rest day per month from Jan 1: MOM

What Are the Best 2022 MLB Postseason Player Nicknames?

Michaela Coel on playing a queer character in 'Black Panther' sequel: 'That sold me on the role'

Dapper Robert Downey Jr, 57, cosies up to his glamorous wife Susan, 48, as the couple join Kesha for the LA premiere of Decision To Leave

Yaël Eisenstat: Why we need more friction on social media

The Ending Of Amsterdam Explained

In The Streaming Ratings Battle Between The Rings Of Power And House Of The Dragon, One Series Continues To Prevail

Who are England playing at the World Cup? Qatar 2022 opponents - what you need to know about Iran, USA, Wales