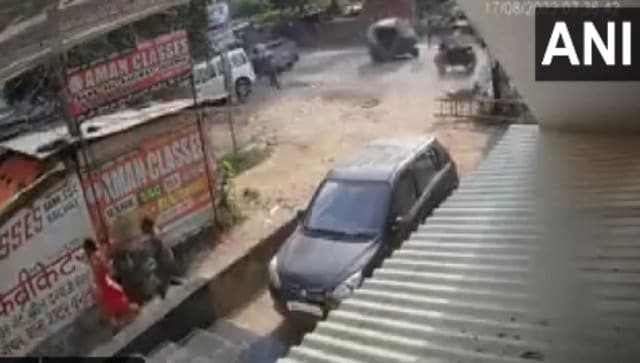 New Delhi: A vegetable vendor’s daughter was shot in the neck allegedly over an affair at Indrapuri area of Sipara in Patna when she was returning from coaching on Wednesday, police said.

The incident, which was captured on CCTV, took place around 7:30 pm. The footage shows a man pulling out a gun from his bag and shooting her before fleeing from the spot.

Bihar| A vegetable vendor’s daughter shot yesterday in Indrapuri locality of Sipara area of ​​Beur PS in Patna. Injured girl who was shot in the neck is undergoing treatment in a private hospital. Matter is being said to be a love affair: Patna Police

The girl, a Class 9 student, is currently in a critical condition and is undergoing treatment at a private hospital.

Police said the accused has been identified but yet to arrested.

According to reports, the police reached the spot after about one-and-a-half hours which shows the failing condition of the law and order situation in Bihar where criminals are acting in broad daylight.

With the incidents of of murders and other crimes on the rise since the ‘Mahagathbandan’ government took over, the BJP has hit out at the Nitish Kumar government, saying that the “jungle raj” has returned to Bihar.

Last week, BJP spokesperson Sambit Patra said at a press conference that several people, including journalists, have been killed and a temple priest was beheaded since the two parties joined hands to form the government.

He also cited cases of sexual assault against women, loot, and the death of six people in Chhapra after drinking spurious liquor.

“Disorder is spreading in the state at a fast pace. It will not be an exaggeration to say that ‘jungle raj’ returns to Bihar,” Patra said.

The Bharatiya Janata Party (BJP) has associated the rule of the Rashtriya Janata Dal (RJD) in the state with ‘jungle raj’ (lawlessness).

He claimed that the BJP’s presence in the state government earlier worked as a restraining influence on crime even though the party did not have home or excise departments.

Teenage schoolgirls are joining women-led protests in Iran over the country’s Islamic dress code in what’s emerging as one of the largest feminist uprisings in the history of the modern Middle East. The demonstrations were triggered by the death of Mahsa Amini, a 22-year-old woman who collapsed into a coma ...

Speaker Nancy Pelosi is one of the richest members of Congress. AP House Speaker Nancy Pelosi’s net worth has ballooned since the 2008 financial crisis — with the help of her husband’s lucrative stock trades, a report said. Pelosi — who recently backed a ban on trading for lawmakers ...

The Matchmaker Telfaz11/Netflix Netflix has previewed a selection of upcoming films and shows aimed at the Arab world and hailing from Saudi Arabia, Kuwait, UAE, Egypt, and Jordan. The global platform has been steadily making inroads into the Middle East and North Africa since 2015, in the face of ...

SINGAPORE – Prices of Housing Board resale flats climbed for the 27th consecutive month in September, with a record 45 flats changing hands for at least $1 million in a month. HDB resale flat prices grew at a faster pace of 1.2 per cent in September, compared with August’s ...