Rickie Fowler has accused the PGA Tour of fumbling its response to the breakaway LIV Golf series. 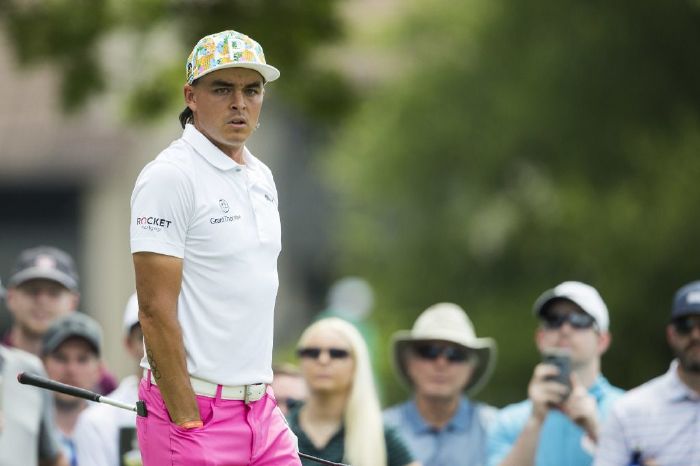 Fowler was one of the roughly 20 PGA Tour pros who joined Tiger Woods for a crisis meeting in Wilmington, Delaware, on Tuesday to discuss the continued threat of the Saudi-backed series, which is shelling out big money to lure some of the biggest players in the world away from their regular tours.

The meeting was reportedly aimed at getting PGA Tour players to formulate a unified plan to tackle LIV Golf’s ongoing encroachment.

The players then met with PGA Tour commissioner Jay Monahan to discuss the problem.

“I’ve told the Tour and Jay when I’ve met with them that I don’t think they have handled it very well at all,” Fowler told Golf Week.

“A lot of the stuff that has happened in the last six months to a year and is starting to happen, to me they are reacting to it versus when the talks of Premier Golf League and LIV came about is when they should have been proactive and gotten in front of it.”

Tiger Woods and Rickie Fowler touch down at Atlantic Aviation as they visit the @BMWchamps. pic.twitter.com/YK5Pnr3Suj

The PGA tour’s initial strategy was to ban all defectors as soon as they play their first LIV event, a decision that prompted a group of players that includes Phil Mickelson, Bryson DeChambeau and Ian Poulter to sue the Tour for harming their careers.

Fowler confirmed he was also offered a “mind-boggling” figure to join the breakaway league, but he still feels the PGA Tour is the best place to be.

The American was considered a likely candidate to jump ship after a recent dip in form had seen him drop outside of the world’s top 150, but he’s staying the course.

“This is where I plan to be,” he said. “I would say there is stuff in the works now as far as the things the Tour is trying to do to evolve with kind of modernising and I feel like they are making the right steps now.

“It [LIV Golf] may bring potentially new audiences in just because it’s different. At the same time, it’s not what golf has always been.

“If there was a perfect world there would be a way to coexist because to me they are very different things.”

Orlando Freefall, the tallest drop tower ride in the world, will be torn down after a Missouri teen slipped from his seat and plummeted to his death. Tyre Sampson, an eighth grader and budding football player, died on March 24 following a fatal fall from the drop tower in ICON ...


View more: Orlando Freefall ride to be torn down after teen’s fatal fall

Does Chicago Traffic Seem Bad Lately? What to Expect This Weekend

With two major events leading to street closures or massive crowds of people trekking into the city, it's likely drivers will see plenty of congestion


View more: Does Chicago Traffic Seem Bad Lately? What to Expect This Weekend

Provincial police are on the scene at a popular Laurentians resort following a shooting. The Sûreté du Québec (SQ) say the received a call at around 12:45 p.m. to chemin Fridolin Simard in the municipality of Estérel –100 kilometres north of Montreal–  concerning an armed aggression. According to early reports, ...

Of all the places to meet a spouse, Demario and Tamela Davis first connected in a medieval literature class. Demario Davis, an All-Pro linebacker who played five seasons with the Jets, now stars on the Saints. Tamela hosts cooking segments on New Orleans TV, and writes a blog called the ...


View more: Demario and Tamela Davis are on a quest to bring back the family dinner

The first time a three-game playoff series visited New York City, there were 31,437 witnesses who believed, to their last breath, that they were about to see a miracle, right there on Flatbush Avenue. This was Oct. 3, 1946. For the first time since the World Series had been invented ...

Two reputed gang members are being sought in the Harlem shooting of a retired NYPD detective, who was the second innocent bystander shot by one of the suspects within days, cops said Friday. Shaquan Moore, 19, and Alex Guzman, 20, both of the “AK Houses” crew, are accused of opening ...

OSTRAVA, Czech Republic – World number one Iga Swiatek reached her 10th semi-final of the season on Friday by defeating American qualifier Caty McNally in straight sets at the Ostrava WTA tournament. French and US Open champion Swiatek triumphed 6-4, 6-4 to take her 2022 record to 59 wins ...

Ro Khanna urges Biden to get tough on Saudi Arabia after OPEC oil cut: To do this to America is 'outrageous'

One Piece Film: Red's Producer Explains Why It's The Perfect Entry Point For New Fans

Blackhawks ‘Hoping' Connor Murphy Will Be Ready for Opening Night

The 25 best songs about America

This $6.7-Million Arkansas Mansion Has Its Own 1.2-Mile Race Track

I'm A Celebrity... Get Me Out of Here! 2022 teaser clip drops as Ant and Dec prepare to welcome 12 famous faces to the iconic Australian camp

Sienna Miller, 40, flashes her abs in a green crop top and high-waisted jeans as she steps out for a romantic stroll with beau Oli Green, 25, in NYC