It would be an act of “folly” for Celtic boss Ange Postecoglou to accept the Everton manager’s job if the relegation-threatened English Premier League club offered him the position.

That’s the opinion of Socceroos great Robbie Slater, who said Postecoglou did not need to take the risk of going to the Toffees, such was their current instability on and off the field.

Former Socceroos coach Postecoglou has reportedly been “sounded out” by Everton, who sacked manager Frank Lampard after their 2-0 weekend loss to West Ham.

It was Everton’s 11th defeat in 20 Premier League matches this season, with only goal difference keeping them ahead of last-placed Southampton.

In contrast, Postecoglou has Celtic on target for back-to-back Scottish Premiership titles under his guidance as well as another crack at the UEFA Champions League.

It’s not the first time Postecoglou has been linked to the Everton job, with the former Brisbane Roar and Melbourne Victory coach’s name having been tossed around as a successor to Lampard when Celtic and Everton were in Australia in November for the Sydney Super Cup. 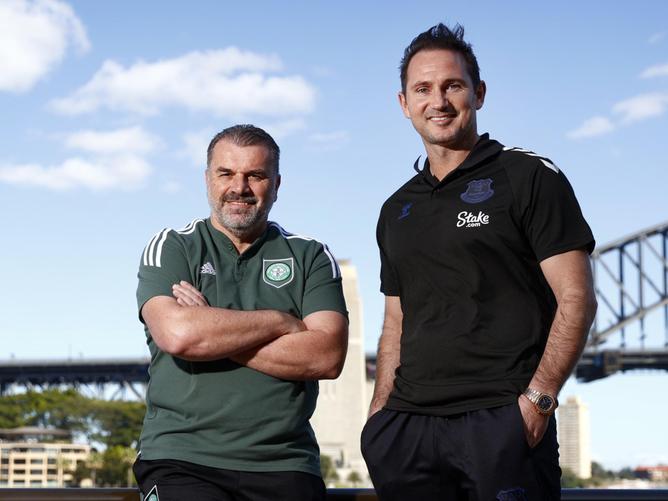 Postecoglou, 57, this week spoke of not only players but coaches wanting to “maximise” their “opportunities”.

“That’s what all of us have in our careers, a limited time and we want to take opportunities,” he said.

However, Slater – who won an English Premier League title with Blackburn Rovers in 1995 – believes Postecoglou would be far better off staying at Celtic rather than taking the Everton job if it was offered to him.

“They’re a club in crisis. It would be folly of him to go there.

“They are in serious danger of being relegated, it would be a huge risk, and one he doesn’t need to take considering the job he has at the moment.

“He’s taken Celtic nine points clear at the top of the table, they’re going to win the title again, the fans love him, the players love him, the club loves him … he doesn’t need to go to a club like Everton, which keeps changing its manager and has off-field problems as well.

“Ange is a very good manager and will eventually manage in the (English) Premier League, so he doesn’t need to go to a club in turmoil.”

Calls for controversial Stage 3 tax cuts to be scrapped

Souttar reportedly on his way to EPL giants Leicester

West Brom are trying to get a late loan deal done for Chelsea youngster Omari Hutchinson as they seek cover for injured winger Matty Phillips.

West Brom have made their first signing of the January transfer window by adding 28-year-old Fulham midfielder Nathaniel Chalobah to their ranks.

The inaugural Oceania Mountain Bike Marathon Championships will make its way to WA in 2023 as part of the hugely popular local event, the Dwellingup 100. Riders from all over the Oceania region are expected to take part in the championships on September 16, 2023. Participants will compete against each ...

Fringe Festival is set to return to Mandurah this month with a range of exciting ticketed shows and events at bars, restaurants and cafes. The Mandurah Fringe Festival will serve up an array of great entertainment — many from Perth’s Fringe World event — from February 8-14, including comedy, music ...

Aaron Ramsey has joined Middlesbrough on loan for the rest of the season from Aston Villa.

Olly Stone has made three Test appearances (Mike Egerton/PA) (PA Archive) Olly Stone believes his involvement in a three-prong extreme pace attack for England alongside Jofra Archer and Mark Wood could spell trouble for Australia this summer. Multiple injury issues over the years mean the trio have never been ...


View more: Olly Stone hopes to play a role in an England pace trio during this year’s Ashes

Benfica midfielder Enzo Fernandez is understood to be undergoing a medical in Lisbon ahead of a proposed move to Chelsea.

Leeds defender Diego Llorente has completed his loan switch to Roma with a view to a permanent deal.

Dems question Kamala Harris as future president: ‘Don’t know she has what it takes’

Australians roll up their sleeves for cancer patients

Man, 55, killed near Geraldton when car he was driving veered off road and crashed into water pipeline

Ange Postecoglou praises Celtic's defence as the foundation of their success

Kings forward Cooks won't get hopes up for MVP award

Trump says public education taken over by ‘pink-haired communists,’ plans to give power back to parents

NRL strikes back at claims it rejected pregnancy policy

Australian retail trade falls for the first time in 11 months

Man charged with murder of mum after alleged abduction

Police investigate cause of ATET fire at Docklands