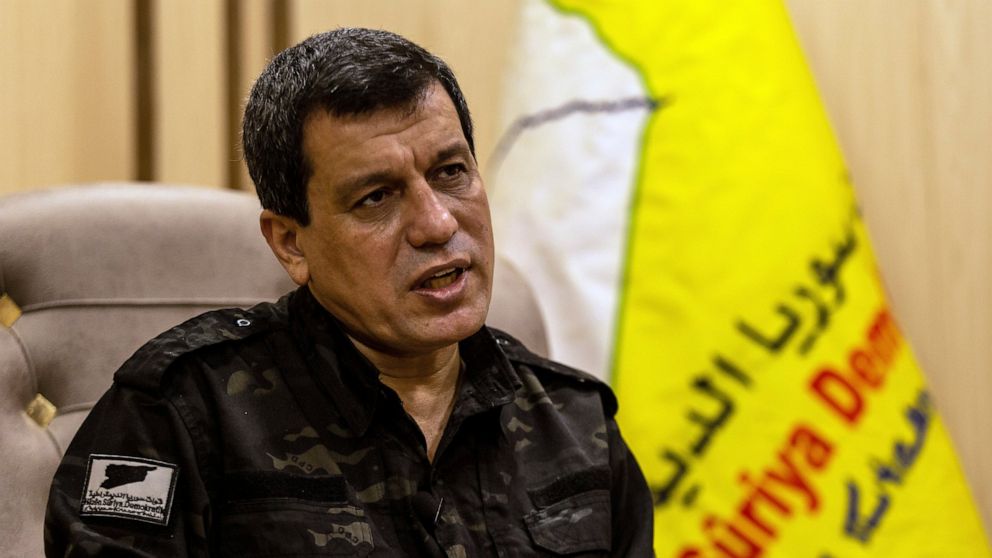 Mazloum Abdi, the commander of the U.S.-backed Syrian Democratic Forces, speaks during a news conference in Hassakeh, Syria, Saturday, Nov. 26, 2022. Abdi said Saturday they have halted operations against the Islamic State group due to Turkish attacks on northern Syria over the past week. (AP Photo/Baderkhan Ahmad) The Associated Press

BEIRUT — The chief of Russian forces in Syria has met with a Kurdish commander over threats by Turkey to launch a new incursion into northern Syria, a Kurdish spokesman and an Arab TV station said Monday.

Siamand Ali, a spokesman for the Kurdish-led Syrian Democratic Forces, confirmed to The Associated Press that Lt. Gen. Alexander Chaiko met Sunday with Kurdish commander Mazloum Abdi in northeast Syria, adding that he has no details about what they discussed.

Russia has called for de-escalation along the Turkey-Syria border.

Turkey has launched a barrage of airstrikes on suspected militant targets in northern Syria and Iraq over the past week, in retaliation for the Istanbul bombing that Ankara blames on the Kurdish groups. The groups have denied involvement in the bombing, and say Turkish strikes have killed civilians and threatened the fight against the Islamic State group.

The Lebanon-based pan-Arab Al-Mayadeen TV reported that Chaiko discussed with Abdi tensions along the northern border and what can be done to avoid a new major incursion by Turkey. The station, which has reporters in different parts of Syria, said Chaiko suggested the deployment of Syrian government forces along the border with Turkey up to 30 kilometers (19 miles) south of the border.

Another SDF spokesman, Aram Hanna, told the Al-Arabiya TV station Monday that the Russians put forward during the talks the conditions of the Turkish side. He added without giving detail: “We reject all the demands of the Turkish occupiers.”