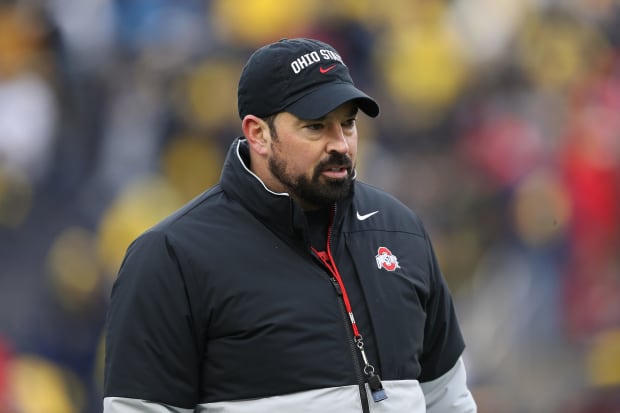 ANN ARBOR, MICHIGAN – NOVEMBER 27: Head coach Ryan Day of the Ohio State Buckeyes looks on during warm-ups prior to the game against the Michigan Wolverines at Michigan Stadium on November 27, 2021 in Ann Arbor, Michigan. (Photo by Mike Mulholland/Getty Images)

Following another disappointing loss to Michigan for the second straight year, Ohio State head coach Ryan Day seemed a bit unsure of his future with the program.

When asked about what’s next for the Buckeyes as they miss out on another Big Ten championship, here’s what the Urban Meyer protege had to say:

We’ll figure out what’s next. I don’t know exactly what is next right now, but that’s life at Ohio State.

It didn’t take long for some in the college football world to call for Day’s job after watching the performance Ohio State put forth in rivalry week.

Ohio State was thoroughly outplayed in the second half, with Michigan’s offensive line imposing its will and allowing running back Donovan Edwards to break off some huge runs to help seal it for the Wolverines.

Quarterback J.J. McCarthy had the game of his young career, making the plays when his team needed him the most.

We’ll see what happens with Day in Columbus, but can’t feel good that fans were chanting for Meyer’s return following the loss.

1/29/2023 The available details of Rihanna’s return to the stage, including the Super Bowl 2023 date and the songs she may perform, are provided below. Recall that the NFL has announced that the Super Bowl LVII halftime show will feature Rihanna. Here we’ll look at the performance details, date, ...