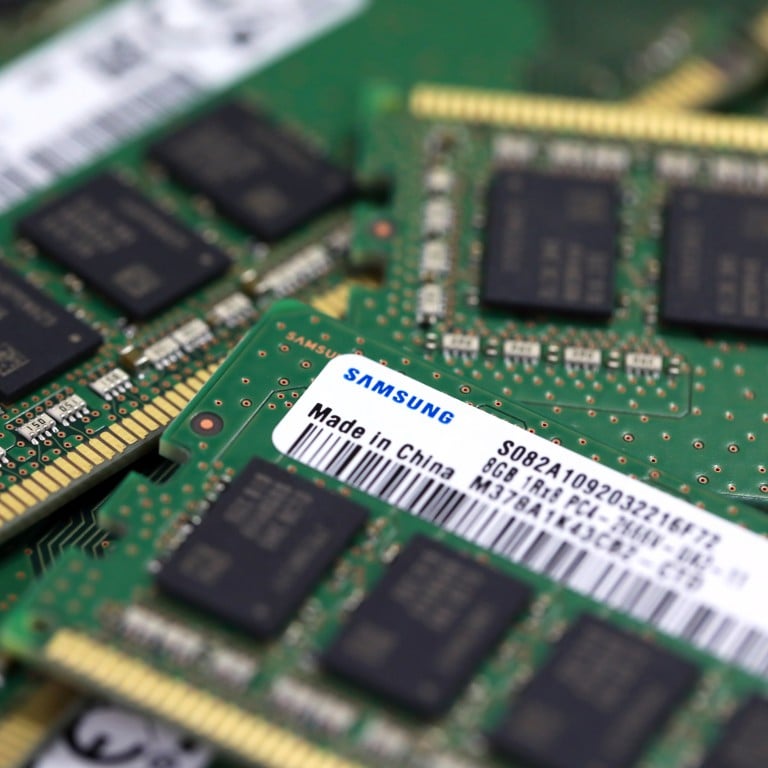 The Biden administration plans to spare SK Hynix and Samsung from the brunt of new restrictions on memory chip makers in China aimed at thwarting Beijing’s technological ambitions and blocking its military advances, sources said.

The Commerce Department, which plans to release new curbs on exports of technology to China this week, will likely deny requests by US suppliers to send equipment to Chinese firms like Yangtze Memory Technologies Co Ltd (YMTC) and ChangXin Memory Technologies Inc (CXMT) if they are making advanced DRAM or flash memory chips, the sources said.

However, license requests to sell equipment to foreign companies making advanced memory chips in China will be reviewed on a case-by-case basis, sources said, potentially allowing for them to receive the equipment.

“The goal is not to hurt non-indigenous companies,” one of the people briefed on the matter said.

The White House and Commerce Department declined to comment. SK Hynix Inc, Samsung Electronics Co Ltd, YMTC, and CXMT did not respond to requests for comment.

The Chinese Embassy in Washington on Thursday described the expected rules as “sci-tech hegemony”. It accused the United States of using its “technological prowess … to hobble and suppress the development of emerging markets and developing countries.”

The move could assuage the worst fears of South Korean memory chip makers that the United States might hobble their China-based manufacturing business in its effort to thwart China’s rise, cripple YMTC and protect vulnerable US memory chip makers.

They still worry, however, that the case-by-case review standard is far from an explicit greenlight for US equipment to be shipped to their Chinese facilities and could result in bickering with regulators over what shipments to approve.

Details of some of the new regulations facing China-based memory chip makers have not been previously reported.

The new curbs target China-based producers of DRAM chips, which hold information from applications while the system is in use, and NAND chips, which are used for data and file storage.

US suppliers seeking to ship equipment to China-based semiconductor firms would not have to seek a license from the Commerce Department if selling to firms producing DRAM chips above the 18-nanometre node, NAND Flash chips below 128 layers, or logic chips above 14 nanometres, the sources said.

However, US companies selling sophisticated technology to indigenous Chinese chip makers producing DRAM chips at 18 nanometres or below, NAND flash chips at or above 128 layers or logic chips at or under 14 nanometres would have to apply for a license that would be reviewed with the tough “presumption of denial” standard.

US suppliers seeking to sell the equipment to non-Chinese origin companies operating in China and producing those same types of chips would also face a license requirement but the applications would be reviewed on a case-by-case basis, the sources added.

If published as expected, the rules would mark the first US bid through export controls to target Chinese production of memory chips without specialised military applications, representing a more expansive view of American national security, according to export control experts.

They would also hit YMTC, a rising power in manufacturing NAND chips founded in 2016. Its expansion and low-price offerings represent “a direct threat” to US-based Micron Technology Inc and Western Digital Corp, the White House said in a June 2021 report.

YMTC is already under investigation by the Commerce Department over whether it violated US export controls by selling chips to Chinese telecoms company Huawei Technologies Co Ltd. Its chips are being evaluated by Apple Inc for inclusion in some of its iPhones in China, a major concern for US lawmakers and the Biden administration.

The rules could also hurt CXMT, a state-backed Chinese company that is working to enter the DRAM market.

LAM Research Corp, Applied Materials Inc and KLA Corp, major US vendors of equipment to make chips, are likely to be hit by the restrictions. LAM and Applied Materials did not respond to requests for comment. KLA declined to comment.

Reuters first reported that the United States was considering limiting shipments of American chip-making equipment to memory chip makers in China including YMTC, part of a bid to halt China’s semiconductor sector advances and protect US companies.

Reuters also reported last month that the Biden administration planned in October to broaden curbs on US shipments to China of semiconductors used for artificial intelligence and chipmaking tools.

The Samsung Galaxy A14 5G gets FCC certification before launch

Samsung to release the Galaxy A14 in these three color options

Huawei, once Samsung’s rival, may be deleting China protest videos

Galaxy A01 gets Android 12, its last Android OS update

The most innovative TV tech of 2022

The world of TV technology has always been pretty cutthroat as the race for bigger, brighter, clearer, darker, and more powerful pushes ever forward to blow our minds with every pixel. The past decade alone has seen many innovations in televisions: 4K and 8K resolution, OLED, QLED, mini-LED, micro-LED, High ...


View more: The most innovative TV tech of 2022

Samsung released Wonderland a couple of years ago as a Good Lock module for users who want to generate custom wallpapers. If you ask me, Wonderland is still one of the most fun custom wallpaper solutions, especially if you’re in a festive mood now that the holiday season is ...

How do you increase the security of fingerprint-based biometrics? Well, how about instead of using a small scanner that can read one fingerprint at a time, you make the entire OLED screen capable of scanning multiple fingerprints simultaneously? It may sound like something out of science fiction, but Samsung ...

Daily Deal: Save up to 26% on the Galaxy Buds 2 wireless earbuds

Black Friday is behind us, but there’s always a Samsung deal to be had, especially now as we approach the end of the year. And if you’re in the market for a new pair of earbuds, the Galaxy Buds 2 are now up to 26% cheaper at Amazon USA. ...


View more: Daily Deal: Save up to 26% on the Galaxy Buds 2 wireless earbuds

Samsung Notes has received a new update. Although the update is small and adds only one new feature, many Galaxy device owners may find it quite handy. It’s an addition to the selection tool that should simplify things and speed up productivity. The popular note-taking app from Samsung has ...

Samsung devices vulnerable to malware apps due to security leak

Millions of Android devices, including Samsung, appear to have been left vulnerable by a major security leak. This isn’t as much a vulnerability as it is an actual leak of a critical component used by device manufacturers who rely on Android OS. More specifically, Android OEMs, including LG, Samsung, ...

Galaxy S21 gets November 2022 security update in the US


View more: Galaxy S21 gets November 2022 security update in the US

Samsung Galaxy Z Flip 5 to Come with Some Significant Changes

Galaxy S20 Ultra holds up well in 2022, but it needed more future-proofing

Samsung One UI 5.1 update: When is it coming, which devices will get it?

Instructions on how to change Samsung phone password simply and quickly

Here are the best Wear OS, Chromebook, and tablet apps of 2022

Google Keep is finally getting dual-pane UI on Samsung tablets

OPPO A77s review – A budget phone with a simple design

Samsung hasn’t stopped working on Exynos 2300, but will it power the Galaxy S23?

Samsung is now testing the One UI 5.0 update for the Galaxy A33 5G

Samsung may not pursue slidable phones, but its rivals might have to

Daily Deal: The budget Galaxy A23 5G drops to an even lower price

The best Samsung smartphones to buy in 2022

Samsung to hire 1,000 engineers for its R&D centers in India

If you like practical designs, you’ll probably love the upcoming Galaxy A54

Future Qualcomm flagship chips could be made by Samsung

Experiencing performance degradation in One UI 5.0? This might fix it