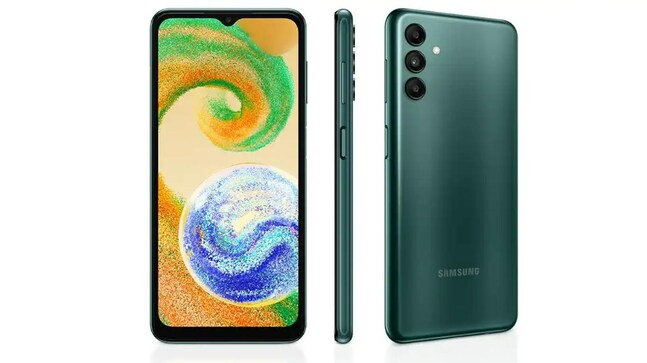 Samsung has unveiled a new Galaxy A series smartphone in India. It is called Samsung Galaxy A04s. The smartphone comes in only one variant with 4GB RAM and 64GB of internal storage.

The smartphone will be available across various platforms including Samsung.com, major e-commerce portals and offline retail stores. Let’s now take a quick look at what the smartphone offers at such an affordable price tag.

As far as the specifications are concerned, the Samsung Galaxy A04s comes packed with a 6.5-inch 90Hz HD+ Infinity-V display with an aspect ratio of 20:9. The phone includes triple rear cameras consisting of a 50-megapixel primary sensor, a 2-megapixel macro sensor and a 2-megapixel depth sensor. On the front, for selfies and video calls, the smartphone includes a 5-megapixel camera.

It is powered by Samsung’s in-house developed octa-core Exynos 850 chipset coupled with 4GB RAM (expandable RAM up to 8GB) and 64GB of internal storage. There’s also expandable storage support by up to 1TB via microSD card. On the software front, the smartphone runs on One UI Core based on Android 12 out of the box.

The Samsung Galaxy A04s is backed by a 5,000mAh battery, which the company claims lasts up to 2 days. The smartphone comes with support for 15W fast charging in the box. Some of the other features of the device includes — fingerprint scanner embedded on the power button, support for Dolby Atmos and other connectivity options.

As a part of the launch offer, Samsung has partnered with State Bank of India (SBI), One card and Slice card to offer Rs 1000 cashback, which brings the effective price down to Rs 12499. The smartphone comes in three colours — black, copper and green.

Ford Trails Tesla In EV Sales, the Tesla Cybertruck Could Change Everything

What might seem obvious to you isn’t always for everyone. The 2022 Toyota 4Runner is the most recent version of a heritage model that’s been a top-performing off-road SUV for many years. This should give the 4Runner an advantage over the 2022 Ford Bronco, but that’s not necessarily the case. ...

4 Advantages the Ford Escape Has Over the Toyota RAV4

The 2022 Toyota RAV4 is one of the most popular compact crossovers on the market right now, but it has a lot of worthy competition. The 2022 Ford Escape is an example of one of the RAV4’s best competitors, and in fact, the Escape is better than the RAV4 in ...


View more: 4 Advantages the Ford Escape Has Over the Toyota RAV4

Driven: The 2022 Ford Bronco Raptor Can Take You Anywhere You Want

The 2022 Ford Bronco is one of the best SUVs you can currently buy if you need an SUV to take you on your daily errands and off the beaten path. And while it’s plenty capable off-road, there are some places that the Bronco can’t go. In that case, you’ll ...


View more: Driven: The 2022 Ford Bronco Raptor Can Take You Anywhere You Want

2 Ford SUVs Are No Longer Recommended By Consumer Reports

Consumer Reports sends an Annual Auto Survey to owners to gather reliability data about popular cars, trucks, and SUVs. Within the survey are many questions about issues that may have occurred over the past year, and it covers 17 aspects of vehicle ownership. Unfortunately, after receiving feedback from owners, two ...

Fiat, an automotive brand property of Stellantis, has launched its first metaverse-based store, which the company claims is the first showroom of its kind. The experience, which was developed with tech supplied by Touchcast and Microsoft, aims to make the virtual process of reviewing a car more interactive. Fiat ...

5 Best Used Midsize Cars Under $20,000 According to Autotrader


View more: 5 Best Used Midsize Cars Under $20,000 According to Autotrader

5 Best SUVs for Driving In the Snow According to U.S. News

3 Pickup Trucks to Tow Your Way Through 2023 With Ease

Which Electric Truck Would You Buy? It Depends on How Old You Are.

AA DRIVEN COTY: The best utes and vans of the year

Ford recalls 634,000 SUVs due to fuel leaks and fire risk

2023 Ford Bronco Ordering: Beware of This Glitch That Could Leave You Without an Auxiliary Switch

Does the World Need an Electric Ford Maverick?

If You Think The Ford Ranger Couldn't Get Even More Premium, They Come Up With The 2023 Ranger Platinum