WARE, England — The Giants practiced Friday afternoon on a picturesque hillside overlooking an exquisite golf course, in the village of Thundridge, England, in the town of Ware.

“It felt like we were in a movie,” safety Xavier McKinney said.

All that was missing was a herd of sheep.

The team is staying in a veritable castle, the Hanbury Manor Marriott. The dirt and gravel path to practice on a converted soccer pitch wound out the back of the hotel and into the woods.

It turned left at the “1st tee” sign on a wooden gate with an arrow pointing right, and steered through the brush past a few residential houses with fresh roses on the window sills, then down a hill to a clearing. 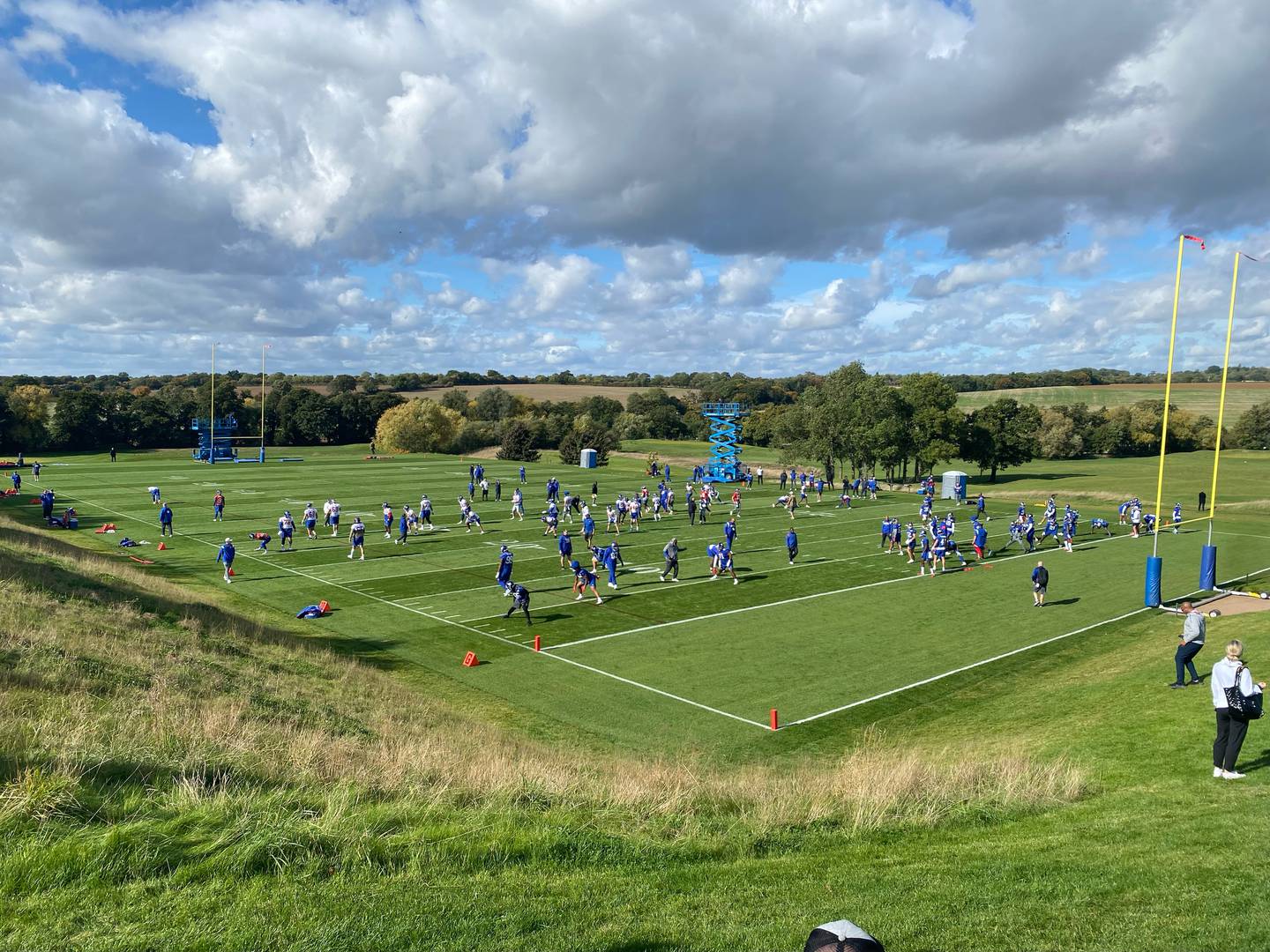 The Giants practice on a hillside in the village of Thundridge, in Ware, England, on Friday afternoon. (Pat Leonard)

There, Brian Daboll’s 3-1 team worked in the breeze.

“It kinda felt peaceful, in a way,” defensive tackle Dexter Lawrence said. “It just opened up to a whole bunch of fields, a little pond over there. We took a couple laps, we did a little stretch. I almost thought we might do some yoga or something.”

That peace was disrupted by speakers blaring Journey’s “Don’t Stop Believin’” as the players stretched. Security guards in black overcoats with earpieces also lined the perimeter with their backs to the field, replacing the fences that surround the team’s practice fields in New Jersey. 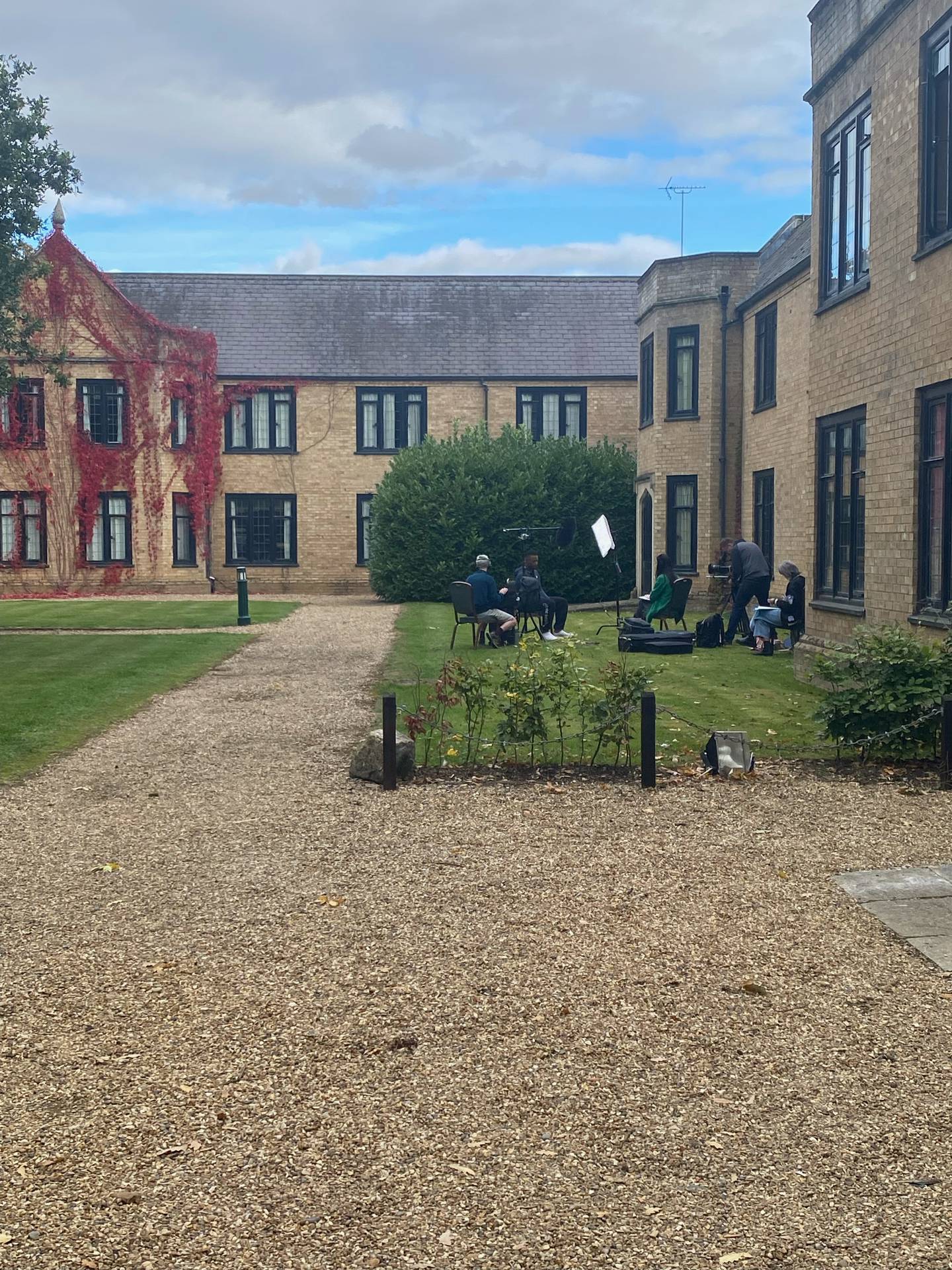 Saquon Barkley films an interview on a courtyard lawn at the Giants’ hotel, the Hanbury Manor Marriott, in Thundridge. (Pat Leonard)

There were even some small hound dogs from the K-9 unit sniffing the grounds — and one good boy with a tennis ball in his mouth, being walked by a local just passing through.

Daboll and the players were noticeably tired coming out of the light practice, of course, a product of their red-eye flight and ongoing acclimation to the five-hour time change.

“I think we’re all pretty tired,” quarterback Daniel Jones said. “But we’ve got a little time to rest up.”

To get on London time, the training staff encouraged players to stay awake and only take short naps until they fell asleep for the night. So the team provided the players and coaches with two huge buses to take them into central London and keep them busy Friday afternoon.

Saquon Barkley had his eyes on one thing: “shopping.” McKinney, too.

“I know there’s a lot of fashion,” McKinney said. “That’s my lane. Every place where there’s clothes, that’s where I’m gonna be.”

Jones opted to stay at the team hotel and claimed he wasn’t going to golf. Shuttles to London are running on Saturday, too, so he might be waiting a day to take in the sights.

Punter Jamie Gillan, who was born in Scotland, said he was going to stay in Ware and see his parents. His mom, dad, sister and some close friends are coming to Sunday’s game, too.

“I haven’t seen my dad in a long time, so it will be really good to see them,” Gillan said.

Oddly, the Giants will not set foot inside Tottenham Hotspur Stadium until Sunday morning when they arrive to play the Green Bay Packers (3-1). But Daboll did his best to describe what the atmosphere will feel like to his team.

“Dabes said it’s like … a big [college] bowl game, where it’s not just one side [of fans],” Barkley said.

The Giants’ hotel is way out of the way of any of London’s hustle and bustle. But clearly, they like it that way for this type of business trip.

It was well-planned. An advance team arrived on Monday to solidify security and logistics, from Friday morning’s arrival from Heathrow Airport to Sunday’s 20-mile bus ride south to the game.

The hotel’s kitchen was unable to provide meals to anyone other than the team on Friday, in fact, because the catering was completely dedicated to the staff and players.

So it is to be a Giant in a foreign land: everything at your fingertips, as long as you don’t nod off and wreck your sleep patterns two days before a 9:30 a.m. ET kickoff.