Levels were up 19m ppt in one insecticide - the safe drinking amount is 0.02 ppt The chemicals may cause cancer, birth defects and kidney disease if ingested An environmental group said the findings were 'disturbing' and 'appalling'

‘Screamingly high levels’ of extremely hard-to-breakdown toxic chemicals are present in the majority of pesticides used in the US, a study warns.

So-called ‘forever chemicals’ were found in seven out of 10 insecticides included in the sample – but six had very large quantities of a particularly dangerous type.

The Environmental Protection Agency (EPA) has been aware of the findings for over 18 months, but has not made any moves to step in.

They are used to make thousands of waterproof, stain proof and heat proof products including food packaging, carpets, clothing and cooking pans.

But they are believed to also be used in pesticides as a dispersing agent, to ensure they spread at an even rate.

They are dubbed ‘forever chemicals’ because they do not break down in the environment and can take years to degrade in the body.

High levels of PFAS in pesticides can be dangerous if they are used on fields where food is grown. 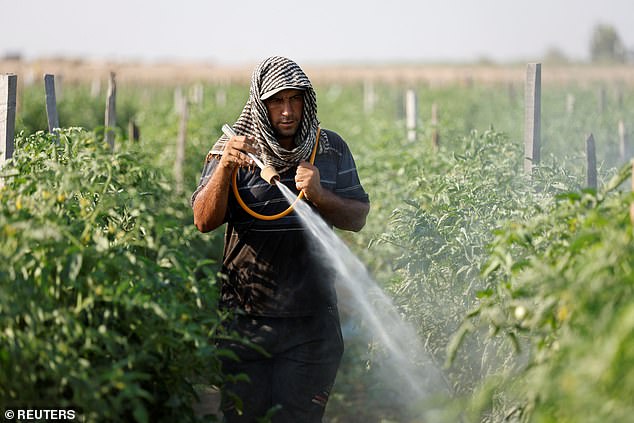 Texas Tech University researchers examined 10 common insecticides being used on cotton fields, but can work for food and other crops.

They found PFAS in seven of the 10 insecticides, with levels of PFOS – which has been storgngly linked to cancer – as high as 19m parts per trillion (ppt) in one insecticide.

While the EPA has not set limits on the amount of PFAS in pesticides, in June it lowered its recommended limit of PFOS in drinking water from 70 ppt to 0.02 ppt, showing that no amount of exposure to the substance is safe.

The researchers gave the names of the insecticides active ingredients as part of their findings, but Lasee said he was never asked for the brand names.

This means the EPA will not know which companies are the culprits of the toxic products.

The findings were published in the Journal of Hazardous Materials Letters.

It said the findings ‘contradict previous statements by the US EPA that PFAS are not used in registered pesticide products’ and said that the threat to the food chain justifies the ban of all pesticides containing PFAS.

It added: ‘These PFAS are being taken up into the roots and shoots of plants, which means that they are entering our food supply through contaminated soils. Given that PFAS are “forever chemicals” this contamination will last long after PFAS is removed from pesticides.’

On September 1, the EPA proposed the removal of 12 PFAS from its approved list of inert ingredients for pesticides but said it was reviewing active ingredients.

An inert ingredient is any substance which is intentionally used in a pesticide product, other than an ‘active’ ingredient.

It does not mean the chemical is nontoxic.

PEER science policy director Kyla Bennett, a scientist and attorney formerly with EPA, said: ‘If the intent was to spread PFAS contamination across the globe there would be few more effective methods than lacing pesticides with PFAS. These findings point to an appalling regulatory breakdown by EPA.’

Bennett told The Guardian there is not much people can do to protect themselves, other than eating organic food, which she noted is not always accessible or affordable.

Pesticides are chemicals used to kill things such as bacteria, insects, plant disease.

Insecticides are a type of pesticide used to specifically kill insects.

PFOS is no longer manufactured in the US due to health concerns, but they are still being made internationally and are imported into the US.