More details are emerging about how the City of Calgary responded to Coun. Sean Chu’s decision to take a picture of the mayor’s licence plate and share it with others.

The incident was revealed by Mayor Jyoti Gondek during a special city council meeting on Nov. 15.

The information resulted in council voting to remove Chu from the deputy mayor roster for both this year and next year.

Chu was in line to serve as deputy mayor in December and chair a council meeting on Dec. 6, the national day of remembrance and action on violence against women.

Gondek said she was opposed to allowing that to happen, citing the security incident.

“He [Chu] has further compromised my personal safety in this past year, given that he took photos of my vehicle licence plate in a secured area, photos that later surfaced from a member of the public,” said Gondek.

The picture was taken by the veteran councillor and former Calgary police officer last January in the executive parkade at City Hall, where council members and senior city officials park their vehicles.

Gondek said the picture showed up in an email to her office soon after. That was about the time a protest against COVID restrictions occurred outside the mayor’s house.

After the matter was discussed publicly in the council chamber, city officials initially refused to talk about how Chu’s behaviour was dealt with.

That line of communications has now changed. 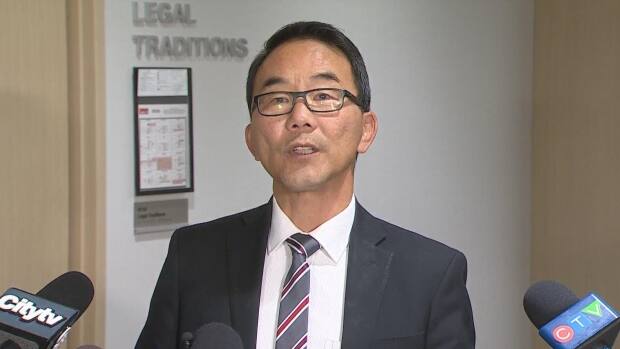 Coun. Sean Chu says he won’t be stepping down following following calls for his resignation from his city council colleagues.

“A picture was in fact taken by a member of council — in this case, Coun. Chu. To address our corporate security team’s security incident or the risk, they deactivated Coun. Chu’s access to the secured city facility,” said Duckworth.

Chu now parks in a nearby public parkade.

Duckworth said the decision to cut Chu’s access to the executive parkade was made entirely by security officials, based on the risk. It had nothing to do with the city manager’s authority.

He said he was told the decision to revoke Chu’s access to the executive parkade is permanent.

After that sanction, Duckworth said a senior official with city administration filed a complaint with the integrity commissioner about Chu’s actions as a potential breach of council’s code of conduct.

The identity of the complainant is confidential.

The integrity commissioner, Ellen-Anne O’Donnell, determines whether a complaint against a council member is worth investigating.

In this case, she decided the issue was better suited for an informal resolution and referred it to the ethics adviser.

For that to happen, both Chu and the complainant had to agree to that process.

Why Chu took the picture of the mayor’s vehicle remains a mystery. He has refused to respond to media inquiries.

In the Nov. 15 council meeting, Chu apologized to Gondek for his actions, saying “what I have done and I don’t want to bore the public with my reasoning.”

He also accepted what he called “the punishment” — namely the change in parking privileges and a training course.

A political studies professor at Mount Royal University, Duane Bratt, questioned why the informal resolution process would be considered, given much less serious complaints against councillors have resulted in full investigations by the integrity commissioner and a public report being issued.

In this case, a senior city official who filed the complaint agreed with the integrity commissioner and Chu to allow the matter to be resolved informally, which resulted in Chu taking a course.

“That’s one of the reasons that informal [resolution] is used. It’s to keep things quiet,” said Bratt.

He also suggested that a third party complainant might be more willing to allow an informal resolution.

“This case gets more complicated because the complainant was not the one who was affected directly. It was not Mayor Gondek. So we’re talking about a third party complaint.”

No details about the training that Chu was given has not been disclosed by the city. So Bratt said there’s no public transparency on whether Chu took an online course, a one-hour refresher, an all-day course or something else.

In the integrity commissioner’s annual report to city council, no information on informal resolutions is provided. So it isn’t known how many past complaints have been resolved through that method.

Bratt said reporting those resolutions might raise more questions than answers, but at least it could provide a sense of how a particular council is doing.

“So if you see a spike in a certain year or a spike within a certain council, that’s indicative of something. But there’s still a lot of unknowns.”

When the city manager’s office was asked if guidance has been provided to city employees regarding any dealings with Coun. Chu, this statement was provided:

“The safety and security of our employees, both physically and psychologically, is paramount in our commitment to creating and maintaining a respectful corporate culture.”

“We encourage our employees to speak to their leader or HR business partner as a resource for support if they feel their work will be affected by a situation or issue, or they don’t feel safe.”

“As an organization, we have created programs, policies and training to help guide employees in building a safe and respectful workplace, and equip them with resources and supports to help them feel safe and protected when faced with an issue or difficult situation.”