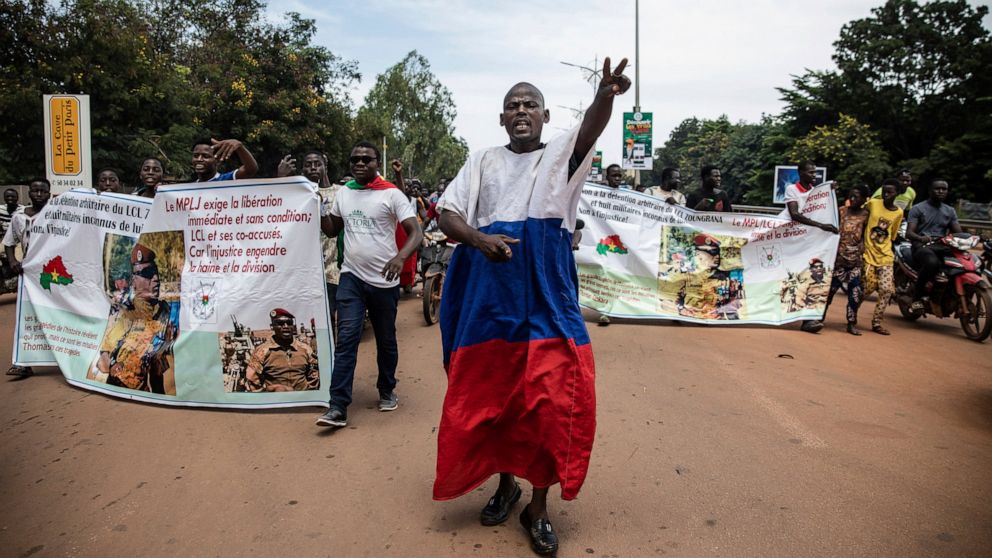 Young men chant slogans against the power of Lieutenant-Colonel Damiba, against France and pro-Russia, in Ouagadougou, Burkina Faso, Friday Sept. 30, 2022. Residents say gunfire rang out early in the morning and the state broadcaster has gone off the air, fueling fears that another coup is underway. The developments Friday come just after coup leader-turned-president, Lt. Col. Paul Henri Sandaogo Damiba, returned from a trip to the U.N. General Assembly. (AP Photo/Sophie Garcia) The Associated Press

A group of junior officers held him to just that Friday evening: calling his time up in a new coup launched on the last day of the month.

Concerns already were mounting Saturday, though, that the latest political volatility would further distract the military and allow the jihadis to strengthen their grip on growing swaths of the once peaceful country.

Burkina Faso's new junta leadership announced on state television that it will effectively restart the clock on the road back to democracy, erasing much of the recent diplomacy between Burkina Faso and the West African regional bloc known as ECOWAS.

Burkina Faso's new leader, Capt. Ibrahim Traore, is vowing to overhaul the military so it is better prepared to fight extremists. He accused Damiba of following the same failed strategies as former President Roch Marc Christian Kabore, whom Damiba overthrew in a January coup, .

The junta said in a statement late Friday that the country would be committing “all fighting forces to refocus on the security issue and the restoration of the integrity of our territory.” But it remains to be seen whether the new leadership can turn around a crisis that has forced 2 million residents to flee their homes.

Earlier this month, Damiba addressed the nation and told the Burkinabe people that “our efforts have begun to bear fruit at the military operational level.” Only two days later, a roadside bomb struck a military convoy in the north, killing at least 35 people.

This week, at least 11 soldiers were killed and 50 civilians went missing after gunmen attacked a supply convoy in Gaskinde, a commune in Soum province in the Sahel.

“Faced by the continually worsening security situation, we, the officers and junior officers of the national armed forces, were motivated to take action with the desire to protect the security and integrity of our country,” said the Friday statement read by junta spokesman Capt. Kiswendsida Farouk Azaria Sorgho.

“A meeting will be convened to adopt a new transitional constitution charter and to select a new Burkina Faso president be it civilian or military,” the statement continued.

Friday’s developments felt all too familiar in West Africa, where a coup in Mali in August 2020 set off a series of military power grabs in the region. Mali also saw a second coup nine months after the August 2020 overthrow of its president, when the junta’s leader sidelined his civilian transition counterparts and put himself alone in charge.

Chrysogone Zougmore, president of the Burkina Faso Movement for Human Rights, called the developments “very regrettable,” saying the instability would not help in the fight against the Islamic extremist violence.

“How can we hope to unite people and the army if the latter is characterized by such serious divisions?” Zougmore said. “It is time for these reactionary and political military factions to stop leading Burkina Faso adrift.”

A Mississippi-based furniture company abruptly fired nearly 2,7000 workers in the US just days before Thanksgiving, according to multiple reports. Right before midnight on 21 November, thousands of workers – many of whom were asleep – received a text message from United Furniture Industries (UFI) saying that they were terminated ...


View more: Company fires 2,700 workers while they were sleeping days before Thanksgiving

Watch the fantastic 25 yard effort from Argentina’s captain which made it 1-0 here. Lionel Messi has scored a fantastic goal to give Argentina a 1-0 lead against Mexico in World Cup group C. In a hard-fought contest, the 35-year-old had struggled to have an influence but that all changed ...


View more: VIDEO: Rescuers saved a Carnival Cruise ship passenger who fell overboard and was lost at sea for 15 hours


View more: Imran Khan says his party will quit all assemblies in Pakistan

George Washington, by Gilbert Stuart, c. 1803-05, American painting, oil on canvas / Shutterstock As fears grow over misinformation spreading on the social media platform owned by the world’s richest man, the official account of the Republican National Committee was called out for posting a fake George Washington quote ...