Seven programs across two states: PM Modi's day in a nutshell while fasting during Navratri 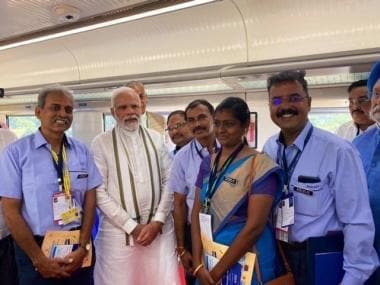 Seven programs across two states: PM Modi’s day in a nutshell while fasting during Navratri

New Delhi: Prime Minister Narendra Modi addressed a public meeting in Rajasthan’s Abu Road on Friday night, in what was at least his seventh program across two states in a day.

Notably, PM Modi who has unwavering faith in goddess Durga is currently observing a fast and will keep drinking only water till the nine-day Navratri comes to an end.

He didn’t use a mic to address the huge gathering as he didn’t want to violate any rule of using loudspeaker post 10pm. pic.twitter.com/69Lft3P3cQ

At the Abu Road event, PM refused to speak using a mic as he did not want want to violate any rule of using loudspeaker post 10 pm.

#WATCH | At Abu Road in Rajasthan, PM Narendra Modi didn’t use a mic to address the huge gathering as he didn’t want to violate any rule of using loudspeaker post 10pm pic.twitter.com/8Q0SyKFkdI

Before arriving in Rajasthan, he attended several programs in his home state Gujarat.

Earlier in the day, PM Modi flagged off the Gandhinagar-Mumbai Vande Bharat Express train, opened the first phase of the Ahmedabad Metro rail and addressed a rally in Banaskantha district, where he also laid the foundation stone for a rail project planned in 1930 as he wrapped his two-day visit to poll-bound Gujarat.

He travelled in the Vande Bharat Express, a semi-high speed train, and also the metro train before addressing a public gathering in Ahmedabad, where he said cities will shape the destiny of India and ensure it becomes a developed nation in the next 25 years.

Travelled on board the Vande Bharat Express! It was a delight to meet women start-up entrepreneurs, talented youth, those associated with the Railways team and those involved in building the Vande Bharat train. It was a memorable journey. pic.twitter.com/eHKAhMlRCc

He visited the temple after speaking at a rally in the town. Modi also performed ‘maha aarti’ at the nearby Gabbar Tirth.

Modi also watched a laser show where an image of the Goddess Ambaji was projected on Gabbar Hill near the temple.

Before visiting the temple, the prime minister laid a foundation stone and dedicated various projects worth over Rs 7,200 crore in Ambaji.

Gabbar Tirth is one of 51 famous ancient `pauranik shakti peethas’ revered by Hindus.