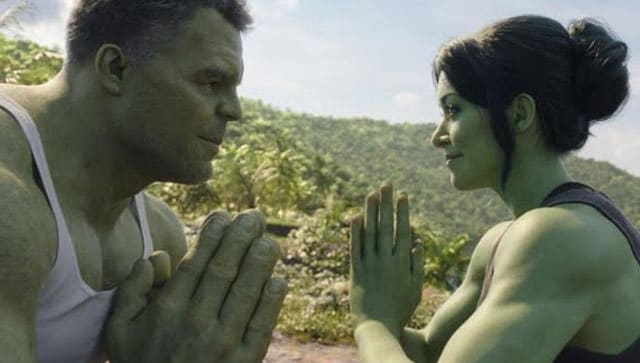 Jennifer Walters aka She-Hulk (Tatiana Maslany) may be an attorney at law. At six feet seven inches, she may be a lean, mean and green gamma-powered superhero. But she isn’t immune from the everyday patronizing and sexism that women are forced to deal with: from male colleagues who underestimate her to the men who explain her own field of expertise to her to the catcallers who harass her outside a seedy bar. Sometimes, all she can do is roll her eyes and shrug it off. Sometimes, she can Hulk out.

In a telling moment in the series premiere of She-Hulk: Attorney at Law, when her cousin Bruce Banner (Mark Ruffalo) describes how he uses his anger and fear as triggers, Jen responds, “Those are like the baseline of any woman existing.” Later, when Bruce insists she learn to control her emotions, she says, “I’m great at controlling my anger. I do it pretty much every day…If I don’t, I’ll get called emotional, or difficult, or I might just literally get murdered. So, I’m an expert at controlling my anger, because I do it infinitely more than you.” Marvel’s new series, created by Jessica Gao (Silicon Valley, Rick and Morty), arrives with a clear girl power purpose, if not swagger, keen on establishing its own place in the long and convoluted mythology of the MCU. The Kat Coiro-directed premiere leavens itself with house-style banter, training montages and the odd fourth-wall break. But when an adaptation upends expectations in expected ways, there is little joy in subversion.

As a setup for a nine-episode season, the premiere works well enough as a primer on the titular character, while introducing us to the other key players (including a superpowered baddie played by Jameela Jamil). An extended flashback first clues us in on She-Hulk’s origin story: a car crash ends with Bruce’s gamma-radiated blood accidentally leaking into Jen’s wound, instantly leading to a transformation. To mentor Jen in the ways of the Hulk, he whisks her off to somewhere in Mexico: a series of training montages sees lots of leaping across palm trees, lifting boulders, some meditating and, of course, Hulk-smashing. As is common with first episodes, this one too is burdened with doing a lot of expository heavy-lifting. Given all it takes for a woman to navigate a man’s world on a daily basis, Jen isn’t as overwhelmed by the challenge of sharing a body with a green muscular beast. While it took Bruce 15 years of conflict, negotiation, lullabies and yoga before settling into the current Smart Hulk avatar, Jen and She-Hulk learn to co-exist by the third Hulk-out. Considering Ruffalo’s character didn’t get a sub-franchise of movies like some of the other Avengers in the MCU, the episode offers a little more emotional context into the pain, trauma and loneliness he had to suffer through before Bruce and Hulk reconciled and became one. As his journey wasn’t easy, he projects his worries onto Jen. He is jealous of her even. But past struggles blinker his perspective to a point where he finds it hard to entertain the possibility that Jen is simply much better at keeping her emotions in check than he ever was, and that she may still prefer using her lawyer skills rather than her superpowers.

Like most MCU entries, She-Hulk too coasts on banter that isn’t always snappy. The mid-credits scene is perhaps snappier than most of what unfolds in the episode itself. Maslany, the prodigious shapeshifter who wowed one and all in Orphan Black, injects a wry sense of humour that tempers Ruffalo’s more serious demeanour. She brings a sense of joy, frustration and vulnerability to the musclebound character that will ensure the show remains watchable, even if it grows slack beneath her as was the case with Orphan Black. And with Marvel shows, it is more often than not a given.

When the first trailer came out, the CGI was the big talking point. It is no doubt jarring, but it doesn’t take us out of the show. At least, not in this episode. But She-Hulk’s ultimate success will be judged not on CGI, but on how well it pulls off a tricky balancing act between courtroom comedy and superpowered hijinks. While there may be more “She-Hulk” than “Attorney at Law” in the first episode, going by what we have seen from the trailers, one suspects the show will lean into the legal aspects in the coming episodes. If the brevity of the show’s format will work in its favour in the long run and if Maslany’s charms are enough to ensure we come back each Thursday for more remain to be seen. Final judgment must be kept on hold till the whole season is out — for the sake of due process and all.

The series premiere of She-Hulk: Attorney at Law is now streaming on Disney+ Hotstar, with new episodes to follow every Thursday.

Prahlad Srihari is a film and music writer based in Bengaluru.

My good friend and Fantasy expert Owen M., says, “Practice early ‘catch and release.’ I don’t care how high the draft pick, if a player is not producing in the first three weeks, release him, and catch another on the waiver wire. That’s how champions are built.” Sound advice from ...


View more: Fantasy Billboard: Giddy Up! and Whoa Down! for NFL’s Week 4

Behnam argued that Bitcoin could soar in a regulated market where institutional investors feel more comfortable wading into the industry.

Controversial British boxer Tyson Fury called on Anthony Joshua to show "any sort of dignity and pride" after the latter failed to sign a fight contract between the two by the deadline on Monday.

and her fiancé Alex Oxlade-Chamberlain’s home in Cheshire was “raided by burglars” while they were home, according to reports on Wednesday. Thesinger and Liverpool footballer, both, 29, who have a son , 13-months, were downstairs when the shocking burglary took place. According to The Sun, the couple have been left ...


View more: Perrie Edwards and fiancé Alex Oxlade-Chamberlain’s mansion ‘raided by burglars’ while they were home

The Premier League is finally set to resume this weekend following the A number of sides including Liverpool and Chelsea have been absent from club football for almost a month, with fans desperate to see their team in action once again after a poor showing from the national team over ...

Saturday Night Live season 48: Cast, hosts, timings and everything we know about the show