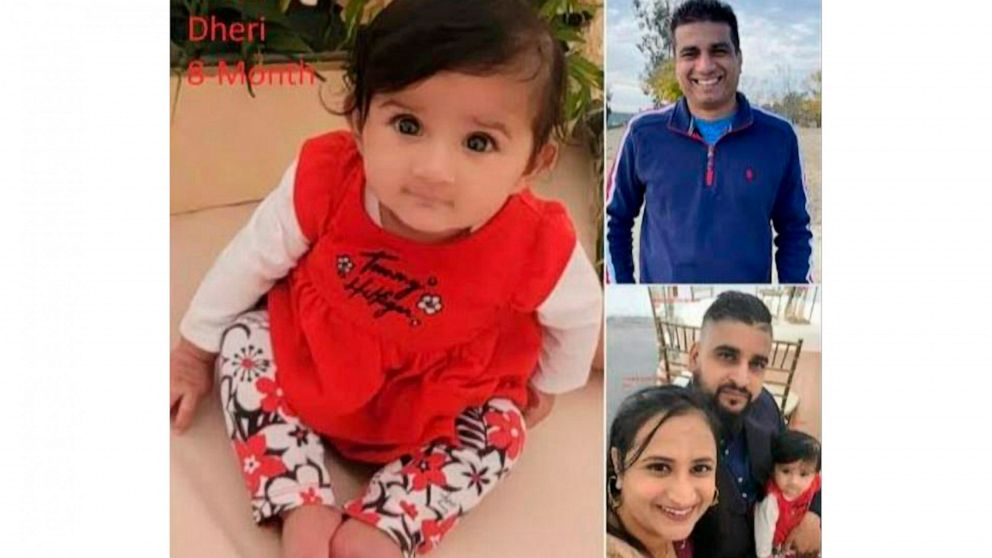 SAN FRANCISCO — The suspect in the kidnapping and killings of an 8-month-old baby, her parents and an uncle had worked for the family’s trucking business and had a longstanding feud with them that culminated in an act of “pure evil,” a sheriff said Thursday.

The bodies of Aroohi Dheri; her mother Jasleen Kaur, 27; father Jasdeep Singh, 36; and uncle Amandeep Singh, 39, were found by a farm worker late Wednesday in an almond orchard in a remote area in the San Joaquin Valley, California’s agricultural heartland.

Investigators were preparing a case against the suspect — a convicted felon who tried to kill himself a day after the kidnappings — and sought a person of interest believed to be his accomplice. Relatives and fellow members of the Punjabi Sikh community, meanwhile, were shocked by the killings.

“Right now, I’ve got hundreds of people in a community that are grieving the loss of two families, and this is worldwide. These families are across different continents,” Merced County Sheriff Vern Warnke told The Associated Press. “We’ve got to show them that we can give them justice.”

The suspect, 48-year-old Jesus Salgado, was released from the hospital and booked into the county jail Thursday night on suspicion of kidnapping and murder, the Sheriff's Office said. It wasn't clear if he had a lawyer who could speak on his behalf.

Earlier, Warnke called for prosecutors to seek the death penalty. The sheriff called it one of the worst crimes he has seen over his 43 years in law enforcement and pleaded for Salgado's accomplice to turn himself in.

“There’s some things you’ll take to the grave. This to me was pure evil,” he said in an interview Thursday.

The city of Merced, where the family's trucking business was located, will hold evening vigils in their memory Thursday through Sunday. The victims' bodies were found near the town of Dos Palos, about 30 miles (50 kilometers) south of Merced.

Warnke on Thursday would not discuss the condition of the adults’ remains in the orchard but said it was unclear how the baby died. Warnke said the child had no visible trauma and an autopsy will be conducted.

Salgado was previously convicted of first-degree robbery with the use of a firearm in Merced County, attempted false imprisonment and an attempt to prevent or dissuade a victim or witness. Sentenced to 11 years in state prison in that case, he was released in 2015 and discharged from parole three years later, according to the California Department of Corrections and Rehabilitation. He also has a conviction for possession of a controlled substance, the department said.

Relatives of Salgado contacted authorities and told them he had admitted to them his involvement in the kidnapping, Warnke told KFSN-TV on Tuesday. Salgado tried to take his own life before police arrived at a home in Atwater — where an ATM card belonging to one of the victims was used after the kidnapping — about 9 miles (14 kilometers) north of Merced. Efforts to reach Salgado’s family were unsuccessful Thursday.

The victims were Punjabi Sikhs, a community in central California that has a significant presence in the trucking business with many of them driving trucks, owning trucking companies or other businesses associated with trucking.

Public records show the family owns Unison Trucking Inc. and relatives said they had opened an office in the last few weeks in a parking lot the Singh brothers also operated. The feud with Salgado dated back a year, the sheriff said, and “got pretty nasty” in text messages or emails. Other details about Salgado's employment and the nature of the dispute were not immediately available.

Warnke said he believes the family was killed within an hour of the Monday morning kidnapping, when they were taken at gunpoint from their business.

Surveillance video showed the suspect — later identified as Salgado — leading the Singh brothers, who had their hands zip-tied behind their backs, into the back seat of Amandeep Singh’s pickup truck. He drove the brothers away and returned several minutes later.

The suspect then went back to the trailer that served as the business office and led Jasleen Kaur, who was carrying her baby in her arms, out and into the truck before the suspect drove them away shortly before 9:30 a.m.

Hours later, firefighters on Monday found Amandeep Singh’s truck on fire in the town of Winton, 10 miles (16 kilometers) north of Merced. Police officers went to Amandeep Singh’s home, where a family member tried to reach him and the couple. When they were not able to reach their family members, they called the sheriff's to report them missing.

They were likely already dead.

Woman is mistakenly emailed an HOA violation for a property 600 miles away, trolls them with epic pettiness

France vs. Poland prediction, odds, betting tips and best bets for World Cup 2022 Round of 16

Seeking 'leader of the rat pack': New York City posts job listing for Rat Czar that pays up to $170,000 - qualifications include 'swashbuckling attitude, crafty humor, and general aura of badassery,' as well as proficiency with powerpoint

Frazer Harrison/BAFTA LA/Getty Images Keanu Reeves has Neo from “The Matrix” and the title role in “John Wick.” Ian McKellen has Gandalf in “The Lord of the Rings” and Magneto in “X-Men.” Sylvester Stallone has Rocky Balboa and John Rambo. Some actors do well carrying big-budget franchises and maintaining ...

Twenty-year-old South Korean phenom Tom Kim is part of a four-way tie for the lead after the opening round of the Tiger Woods-hosted Hero World Challenge.

Joy Behar Blames Casey Anthony for End of Her HLN Talk Show on ‘The View’: “She’s a Little Liar”

Plenty of people won’t be tuning into Peacock‘s new Casey Anthony documentary for their own reasons, but Joy Behar says she’s skipping out on the true crime series over some professional beef from years ago. Behar revealed on today’s episode of The View that she’s boycotting Casey Anthony: Where the Truth ...

NASSAU, Bahamas — In the fall, as he was about to play in his first Presidents Cup, Max Homa hatched an idea. Homa had not yet gotten to know Cameron Young, the PGA Tour Rookie of the Year last season with a remarkable rise to elite status and such a ...

Leila Roker/Instagram Al Roker’s daughter is speaking out about her father amid his ongoing health issues. On Wednesday, Leila — the 24-year-old daughter of the Today show weather anchor — thanked her followers for the well wishes she has received since Roker was readmitted to the hospital. “Thank you ...

This Is What The Color Of Your Car Says About You

This Is What The Color Of Your Car Says About You Most people have a favorite color, and in recent years, experts have tried to find a meaning for our color preferences. Interestingly, the “color psychology” fad, which was very popular in marketing and branding, has taken the corporate ...


View more: This Is What The Color Of Your Car Says About You

Arizona Secretary of State Katie Hobbs speaks at a roundtable event in Phoenix, on Sept. 19, 2022. A Republican-led county in Arizona that flouted a statutory deadline for election certification ended up certifying its results Thursday just hours after a judge ordered it to take action. Officials in Cochise ...

Elon Musk has kicked Kanye West off Twitter: 'He again violated our rule against incitement to violence'