SMS benefited from the start of trading at its grid-scale battery site in BurwellOverall revenue at the Scottish-based business increased by 21% to £62.7mThe group expects to fit at least 450,000 smart meters this financial year

The energy infrastructure provider has fitted over 40,000 smart meters each month since the beginning of the second quarter, compared to around 30,000 devices per month last year.

It further benefited from the start of trading at its 50MW grid-scale battery site in Burwell, Cambridgeshire, which the group said had performed ‘well ahead of the board’s expectations’. 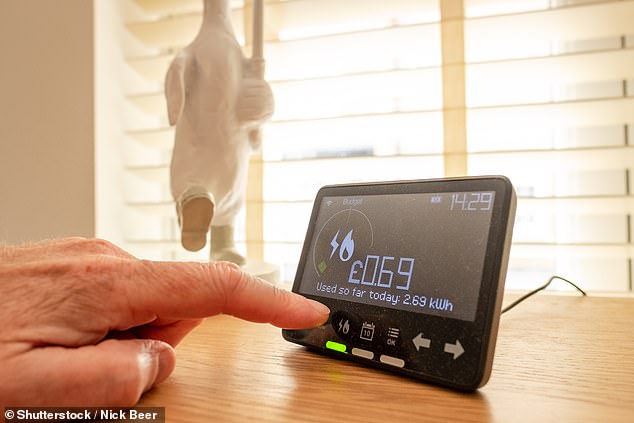 In demand: Energy infrastructure provider Smart Metering Systems said it had fitted over 40,000 smart meters each month since the beginning of the second quarter

This led to revenues in its energy management division almost tripling to £5.6million, though SMS also attributed the result to a pick-up in demand from a major customer in the hospitality industry and an increasing focus on energy efficiency.

Overall revenue at the Scottish-based business rose by 21 per cent to £62.7million in the first six months of 2022, while pre-tax profits climbed by 22 per cent to £6.1million.

SMS expects to insert at least 450,000 smart meters this financial year, helped by a new contract with an unnamed independent energy supplier that it expects to add about 100,000 meters to its order pipeline.

A separate 40MW battery project is also in the latter stages of commissioning and is set to open before this year ends.

As a consequence, it anticipates underlying pre-tax earnings will ‘be in line with the upgraded guidance’ given in its previous trading update.

Chief executive Tim Mortlock said the group was ‘pleased to see continued acceleration in our meter installation run rates, an increase in our smart meter portfolio and a new contract which adds to our smart meter order pipeline.

‘Leveraging on our end-to-end platform, we have successfully built and begun to deliver a strong pipeline of grid-scale battery storage projects within a short period of time, with significant additional opportunities from this substantial and growing market.’

Investors have been awarded a 20.625p per share interim dividend payment, a 10 per cent annual increase in line with company policy.

Beyond this year, the Glasgow-based firm anticipates smart meter installation run rates to continue improving and the inflationary environment ‘to have a net positive impact on our forecasts.’

Smart Metering Systems shares were up 0.9 per cent to £9.09 during the late afternoon on Tuesday, meaning their value has grown by more than a quarter in the past six months, although they remain slightly down on the same time last year.

Smart meters are gas and electricity meters containing an in-home display that allows households and businesses to see how much energy they are using and what it is costing them.

Many campaigners consider them a vital tool in the fight against global warming as they can potentially enable people to reduce their energy usage during peak periods, thereby boosting the use of renewable energy sources.

But there are concerns that the devices make power grids more vulnerable to cyberattacks and may not save customers as much money as they thought.