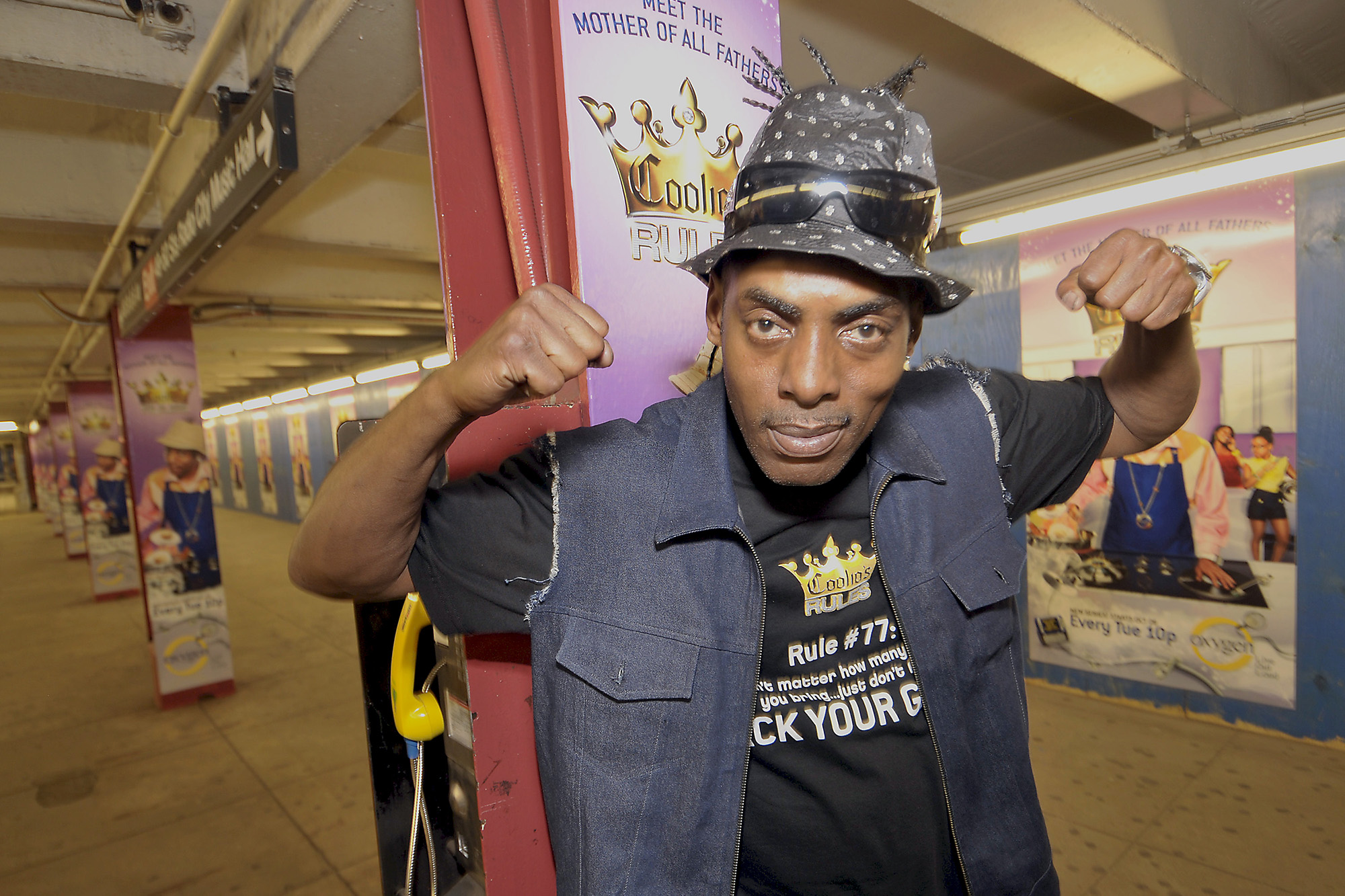 Coolio’s death shocked the world, as some of rap and hip-hop’s biggest names rushed to social media to pay tribute. Oxygen Media/NBCUniversal via Ge

Rap and hip-hop’s biggest names rushed to social media following the news of Coolio’s death at age 59 on Wednesday.

The “Gangsta’s Paradise” hitmaker’s official cause of death is pending though cardiac arrest is suspected.

Fellow rapper Snoop Dogg, who collaborated with the Grammy winner on his 2006 track “Gangsta Walk,” rushed to Instagram to pay his respects. 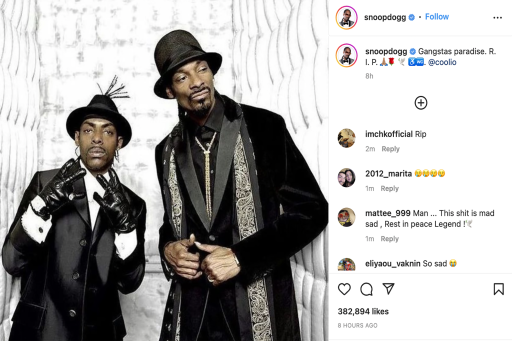 “Heartbroken to hear of the passing of the gifted artist @coolio,” she wrote on Instagram alongside a clip of the music video. “A life cut entirely too short.”

“As some of you may know I was lucky enough to work with him on Dangerous Minds in 1995,” she continued. “He won a Grammy for his brilliant song on the soundtrack – which I think was the reason our film saw so much success.”

“I remember him being nothing but gracious. 30 years later I still get chills when I hear the song. Sending love and light to his family. Rest in Power, Artis Leon Ivey Jr. ❤️,” Pfeiffer added.

NBA star LeBron James was also saddened by Coolio’s death, writing the rapper’s name alongside a string of dove emojis.

“Exactly where he is now! GANGSTA’S PARADISE,” James wrote.

Fellow 90’s rap icon MC Hammer also showed love to the late rapper on Twitter, calling him “one of the nicest dude I’ve ever known.”

Ice Cube, who collaborated on numerous songs with the Grammy winner, took to Twitter on Wednesday night to pay tribute to the late musician. 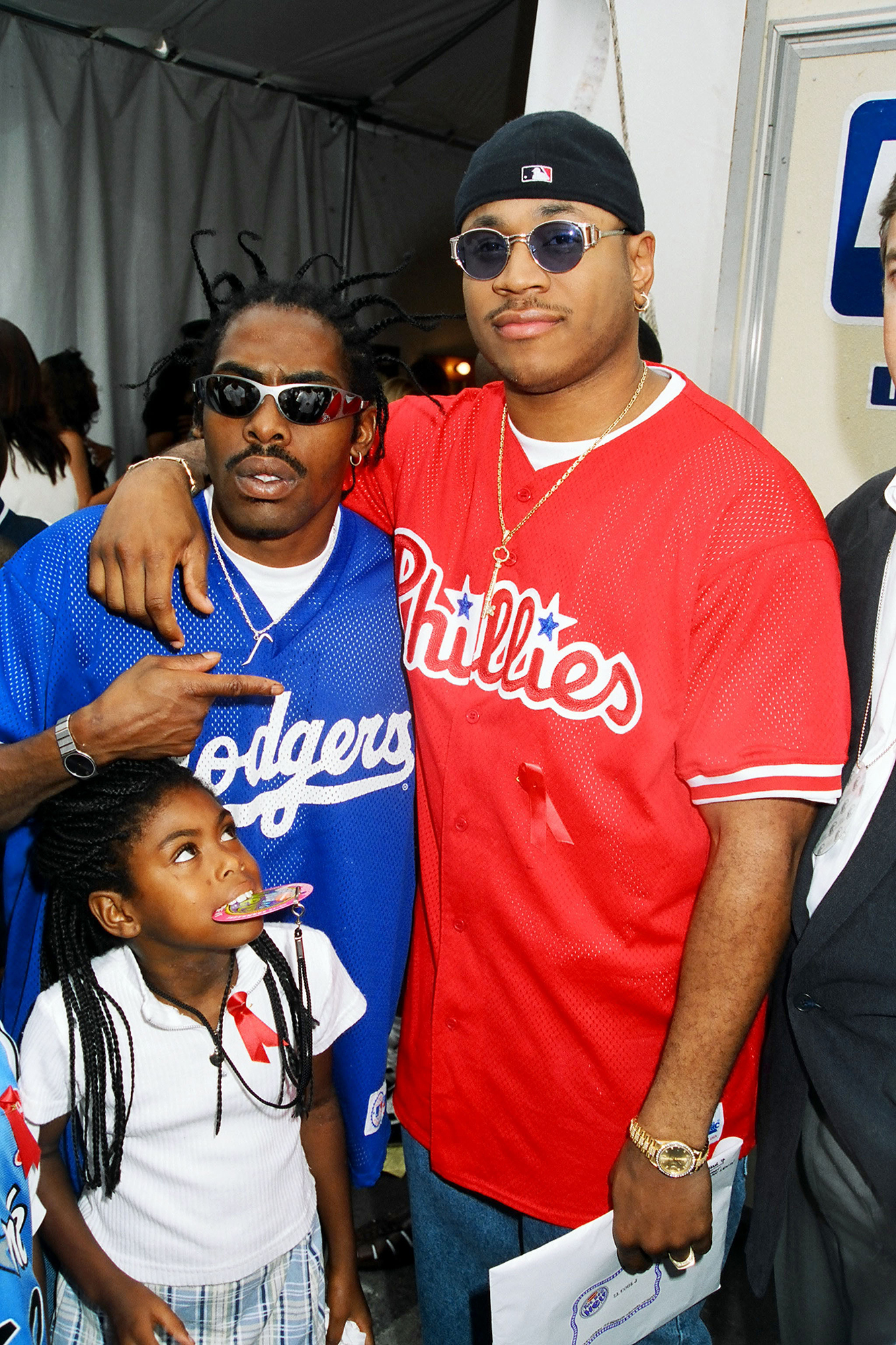 Coolio and LL Cool J are spotted together during the 1996 Nickelodeon Big Help in Santa Monica, Calif.

“This is sad news. I witness first hand this man’s grind to the top of the industry,” he tweeted alongside reports of Coolio’s passing, adding “Rest In Peace.”

“Coolio was the West Coast Flavor Flav, He loved telling everyone that,” he wrote. “We was supposed to perform together this Tuesday. RIP my friend.”

This is sad news. I witness first hand this man’s grind to the top of the industry. Rest In Peace @Coolio https://t.co/vCeyn08Vsi

Another one of the “Fantastic Voyage” rapper’s colleagues, Vanilla Ice, expressed his sadness after hearing about the loss.

Actor Martin Lawrence also took to Twitter to send his “deepest condolences and prayers” to the rapper’s family. 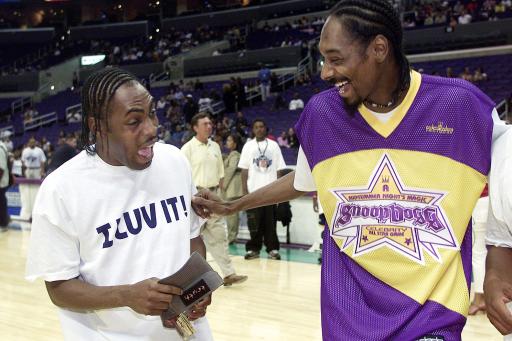 Coolio won a Grammy when he paired with Snoop Dog for the hit 2006 track “Gangsta Walk.”

Rocker Bret Michaels shared a snap of himself with the late musician, writing: “My deepest condolences go out to the family, friends, and fans on the loss of @Coolio. Awesome guy who will be missed.”

Where to stream Die Hard

Croatia vs Canada live stream: Watch the game for free

It's the 3rd anniversary of Dakota Johnson's birthday party, and we're all invited…except for you, Ellen!

Sex, gore and double roles: How A24 slasher ‘X’ mines the horrors of growing old

Could arts funding cuts and cost of living crisis affect your favourite TV shows and films?

Three Day Millionaire: Grimsby is the subject of a movie again - but this time the town is celebrated, rather than mocked

(Getty Images / Apple TV+) Will Smith has shared a message for those who might not want to see his new film because of his behaviour at the Oscars. Emancipation, a new drama from Training Day director Antoine Fuqua, is the first new Smith film to be released after ...

The Prince and Princess of Wales will fly to the United States this week for a three-day trip that culminates with the staging of the awards he founded to discover and scale up environmental solutions to repair the planet.

George Takei has addressed his Star Trek co-star William Shatner’s claim that he uses his name for “publicity”. Last year, Takei mocked Shatner’s voyage to outer space, saying he was being used as a 90-year-old “guinea pig” to assess the impact of space on an “unfit” specimen. Shatner responded ...

Jessica Brown Findlay: ‘I’d never want to do something that means I couldn’t have a normal life’

Jessica Brown Findlay (Getty) Jessica Brown Findlay was a nightmare flatmate. At least, that’s what she remembers of her time as a student, just a few years before a role in Downton Abbey changed her life. Back then, there were no thoughts of having the perfect property, or making ...


View more: Jessica Brown Findlay: ‘I’d never want to do something that means I couldn’t have a normal life’

‘It isn’t fair to depict millennials as homeowners’: Is TV finally catching up to the rental crisis?

‘Friends’ is the quintessential flatshare sitcom, but only made ‘very nominal’ nods towards economics (Warner Bros/Netflix) The contract says no crossover: he has it from 8am to 8pm and I have it 8pm to 8am.” In the first episode of The Flatshare on Paramount Plus, Tiffany (Jessica Brown Findlay) ...


View more: ‘It isn’t fair to depict millennials as homeowners’: Is TV finally catching up to the rental crisis?

Cyber Monday Sonos Deals: Save Up to 20% on Speakers, Soundbars and More

Get some of our favorite wireless speakers and soundbars for hundreds less than the list price.


View more: Cyber Monday Sonos Deals: Save Up to 20% on Speakers, Soundbars and More

Score a wireless speaker at an incredible price.

SEOUL, Nov. 28 (Yonhap) — South Korean actress Son Ye-jin has given birth to a son, her management agency said Monday, eight months after marrying actor Hyun Bin. Son delivered the baby Sunday and both of them are in good health, MSteam Entertainment said. The celebrity couple, both aged 40, ...

Matt Hancock finishes third in I'm a Celebrity... Get Me Out of Here!

Star Wars: what we’d like to see in Andor season 2

I'm A Celebrity: Matt Hancock one step closer to being crowned king of the jungle after reaching final

5 new Netflix releases you better not miss next week

Publicist: Irene Cara, star of the movie 'Fame' and winner of an Oscar for the title song for 'Flashdance,' has died

Argentina vs Mexico live stream: Watch the game for free

France vs Denmark live stream: Watch the game for free

Is Buying Cable TV Still a Good Idea? We Do the Math

‘Weinstein said, “Alfred. What the f***’s going on?”’ Alfred Molina on his brush with the disgraced mogul, making Marvel movies and his preferred spin on sexuality

'Lovely guy' Matt Hancock makes it to the final four of I'm A Celebrity…Get Me Out Of Here!

Backstage with... Jenna Ortega and Gwendoline Christie as Wednesday Addams returns to screens