Militants from al Qaeda-linked al Shabaab had been holding scores of people inside the hotel in the capital before the assault was brought to an end 18 hours after it started. Image: An ambulance takes an injured person to hospital after the al Shabaab attack in Mogadishu

A near day-long siege by Islamic extremists at a hotel in Mogadishu is over after Somali security forces stormed the building.

Militants from al Qaeda-linked al Shabaab had been holding scores of people inside the hotel in the capital before the assault was brought to an end 18 hours after it started.

The extremists killed eight civilians and a forces member, while six militants died during the counter-operation at the Villa Rose hotel.

Five of the attackers were shot dead, and another blew himself up, according to police. 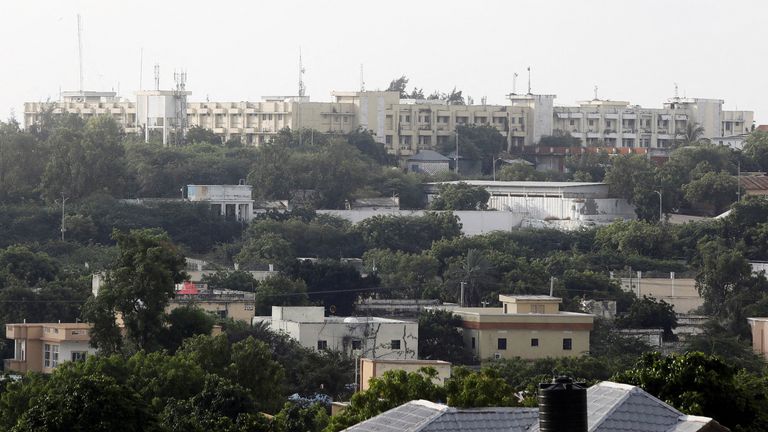 Image: A general view of the presidential palace area where the hotel attack took place

Around 60 other civilians, who had been trapped inside, were freed and none of those were injured. It was not immediately clear if others were missing.

“The operation at the hotel Rose has been concluded,” police spokesperson Sadik Aden Ali declared.

Government officials in Mogadishu use the Villa Rose for meetings, and some live there.

The attack is thought to have started with an explosion before gunmen broke through the gates.

Somalia’s environment minister Adam Aw Hirsi is among those who live in the building and said he was among a group that kicked down a door to get away.

‘Bullets rained in all directions’

“I had exited the hotel mosque where we performed the evening prayer in congregation when the explosion hit. The roof of the VIP room I was in flew and glass shattered far and wide,” Mr Hirsi said.

“Then bullets rained in all directions,” he said, adding that he, a friend and another minister, fled the building through a rear exit.

“Many people followed us to the exit, we broke the door with collective kicks and we exited to safety,” he said.

Al Shabaab has claimed responsibility for the deadly attack, saying it was targeting the nearby presidential palace, in one of the most protected parts of central Mogadishu.

The assault comes amid a new, high-profile offensive by the country’s government against the militant group, which still controls large parts of central and southern Somalia.

Al Shabaab is trying to topple the administration and establish its own rule based on an extreme interpretation of Islamic law.

The attack near the heart of government is likely to cause fear among residents of the seaside city which has long been prone to militant attacks, say observers.