Strange creature with ‘mouth but no anus’ is not earliest human ancestor, study finds 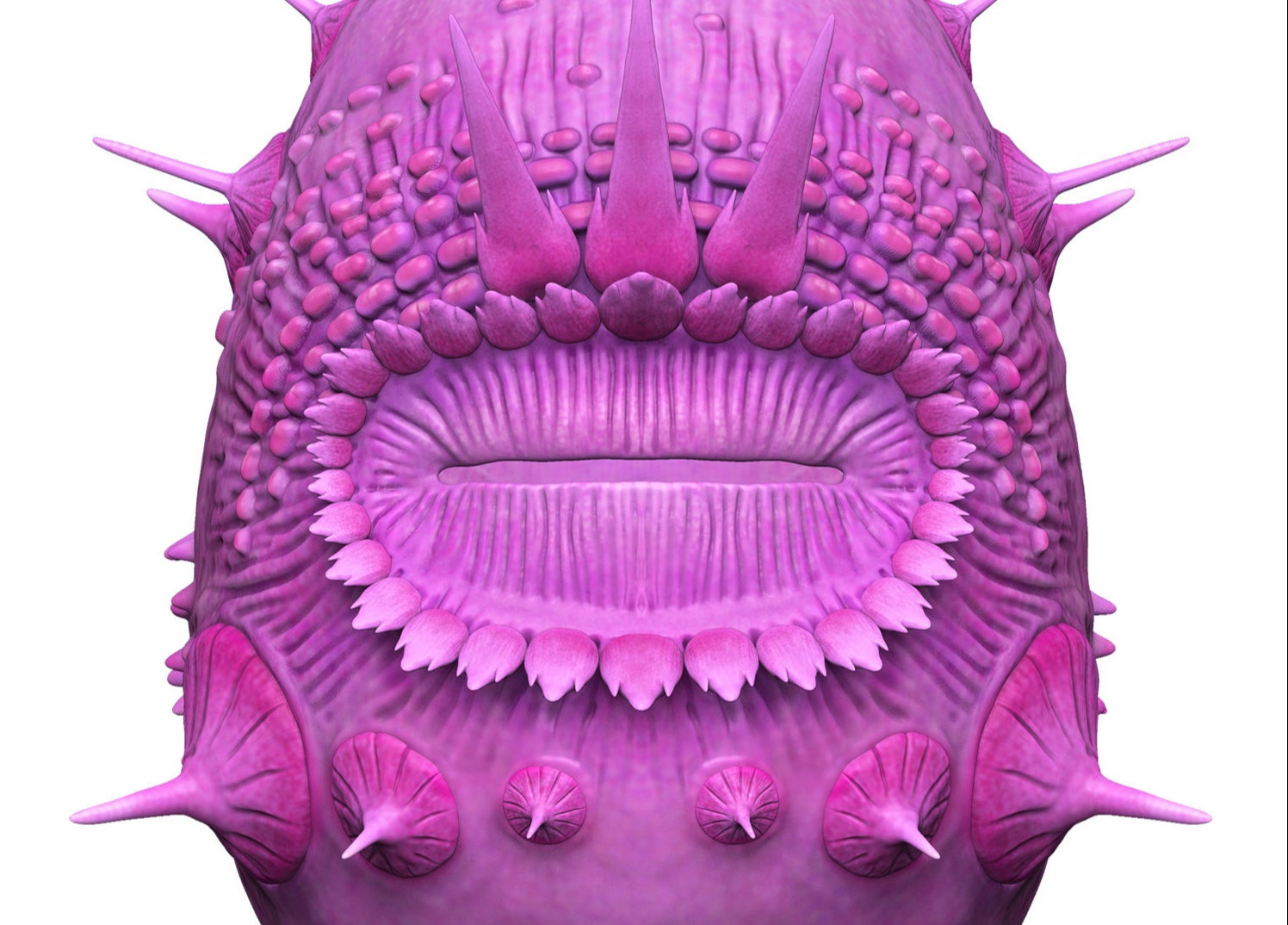 A strange microscopic creature which has “a mouth but no anus” and from which humans were earlier thought to have descended has now been found to be a part of a different family tree.

Its large mouth was found to be surrounded by spines and holes which were interpreted as pores for gills.

Based on these features, a 2017 study reported that Saccorhytus was the most primitive “deuterostome” – a broad biological category of animals encompassing sub-groups, including vertebrates and the earliest step on the evolutionary path that eventually led to humans.

However, the latest research, published on Wednesday in the journal Nature, assessed 500-million-year-old fossils from China and found the holes around the creature’s mouth are bases of spines that broke away during the preservation of the fossils.

Researchers, including those from Chang’an University in China, now believe the mysterious creature belonged to a different group of animals that includes insects and worms. 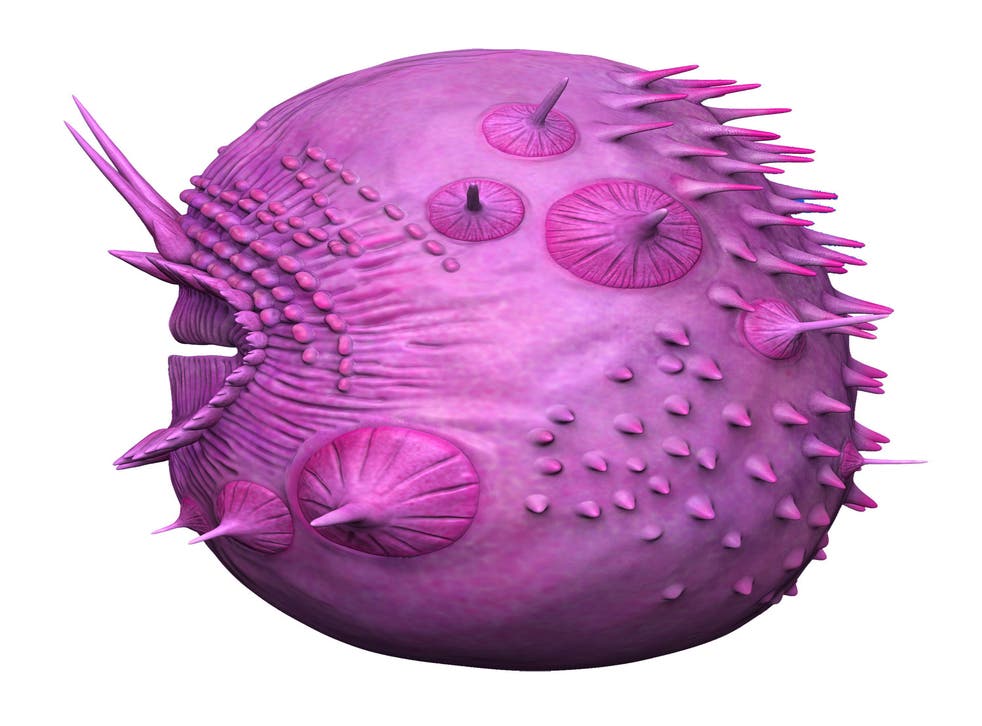 “Saccorhytus was a curious beast, with a mouth but no anus, and rings of complex spines around its mouth,” Yunhuan Liu, professor in Palaeobiology at Chang’an University said.

In the new research, scientists used powerful computers to construct a 3D digital model of the fossil.

The new models showed that pores around the mouth were closed by another body layer extending through, creating spines around the mouth, which they suspect would have helped Saccorhytus capture and process its prey.

“We considered lots of alternative groups that Saccorhytus might be related to, including the corals, anemones, and jellyfish which also have a mouth but no anus,” said Philip Donoghue of the University of Bristol, who co-led the study.

“To resolve the problem our computational analysis compared the anatomy of Saccorhytus with all other living groups of animals, concluding a relationship with the arthropods and their kin, the group to which insects, crabs and roundworms belong,” Dr Donoghue said. 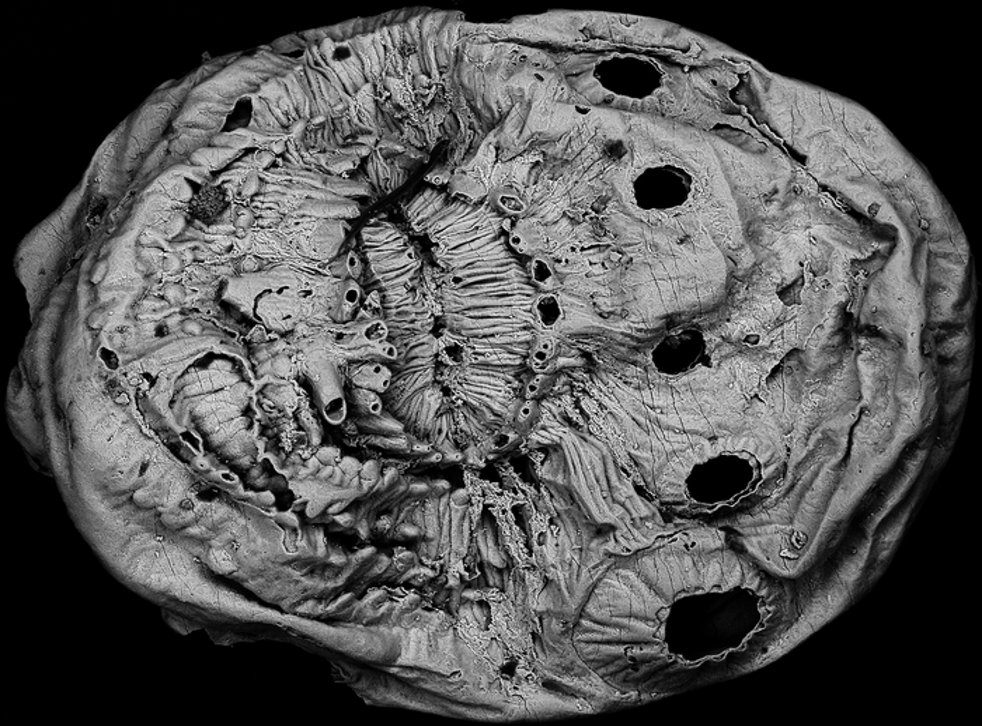 The creature’s lack of anus, according to scientists, is an intriguing feature that could shed more light on how animal body plans evolved.

Classifying the creature as “ecdysozoan” – that includes arthropods and are characterised by having a cuticle or external skeleton – also raises questions on the origin of the body part in that group.

“This is a really unexpected result because the arthropod group has a through-gut, extending from mouth to anus. Saccorhytus’s membership of the group indicates that it has regressed in evolutionary terms, dispensing with the anus its ancestors would have inherited,” Shuhai Xiao, another co-author of the study said.

“We still don’t know the precise position of Saccorhytus within the tree of life but it may reflect the ancestral condition from which all members of this diverse group evolved,” Dr Xiao added.

Lawyer who threw Molotov cocktail at NYPD car during George Floyd protests says she was drunk and dealing with 'unprocessed trauma' at the time, as she asks for reduced sentence

Heroin addict, 34, is arrested for murdering his mother, 70, and setting her remains on fire outside her $900,000 in affluent Cape Cod, Massachusetts - after she threatened to kick him out for failing to get clean

Cocaine galore! Walker discovers £90m of Class A drug in black sacks washed up on a Welsh beach

Student, 21, who took his life in lockdown was one of eleven in just six years at Exeter University, as his parents claim that staff did not do enough to help

Kwasi Kwarteng says 'hindsight is a beautiful thing' in his first interview after his mini-budget crashed the pound, spooked the markets and sent Tory MPs into a tailspin

How much agony can a family take? Fears the police may return from the rain-lashed moors without answers for Keith Bennett's loved-ones as new hunt for his grave enters third day

Just like mom and dad! Kim Kardashian and Kanye West's daughter North, nine, channels her parents as she rocks a full leather face mask in Paris

Families' fury after 65ft phone mast appears 'with no warning'

How to dethatch a lawn for healthier grass

null Knowing how to dethatch a lawn can give you healthier grass all year round. Thatch is essentially a layer of dead plant matter and debris which gradually forms on the surface of the soil. It’s produced faster than it can break down, and so will grow thicker and ...


View more: How to dethatch a lawn for healthier grass

Manchester United star Donny van de Beek is ‘surplus to requirements’ at Old Trafford and could look to secure his departure in January, according to journalist Pete O’Rourke. The Red Devils spent more than £200million during the summer transfer window, but the new recruits have resulted in van de Beek ...

Karlie Kloss proved that less is more as she took to the A-list filled Business of Fashion, also known as BoF, Gala in Paris on Saturday during the city’s fashion week. The model, 30, donned a simple nude gown by designer Alexandre Vauthier, which was completely emblazoned with diamonté detailing. ...


View more: Karlie Kloss dazzles in a diamanté studded gown as she joins a glamorous Ashley Graham at the star-studded BoF Gala during Paris Fashion Week

Police have confirmed that an 18-year-old man died in a two-vehicle collision on the A40 Golden Valley Bypass last night, and are appealing for information. Shortly after 11pm yesterday (September 30, 2022) police responded to a report a car had collided with a stationary heavy-goods vehicle parked in a layby. ...

Tragic start to the long weekend as boy, 10, dies and teen girl is left fighting for her life after their car hit a tree and rolled as horrified bystanders drag them from the wreckage

Boy, 10, killed after car veered off road and hit tree at Merriwa, NSW, Saturday A 15-year-old teenage girl was taken to John Hunter Hospital in stable conditionCrash marked the fourth accident in state in horrific start to long weekend


View more: Tragic start to the long weekend as boy, 10, dies and teen girl is left fighting for her life after their car hit a tree and rolled as horrified bystanders drag them from the wreckage

'She fought every day and that's a lesson I'll take through my life': Ashley Cain reveals he signed up to Celebrity SAS after going through a 'traumatic' time when daughter Azaylia passed away

Ashley Cain has revealed he signed up for SAS: Who Dares Wins after going through a ‘traumatic’ time in his life when his baby daughter, Azaylia passed away. He sadly lost his daughter on April 24, 2021, when she was just eight months old following a courageous battle with acute myeloid ...


View more: 'She fought every day and that's a lesson I'll take through my life': Ashley Cain reveals he signed up to Celebrity SAS after going through a 'traumatic' time when daughter Azaylia passed away

How Magnum ice creams, chip butties and a new army of Twitter fans are helping my Mum face cancer, writes DR LIZ O'RIORDAN on the new lessons she's learned, after facing the disease twice herself

In March, my mum Isobel noticed a small swelling on the back of her upper right arm. It wasn’t sore, perhaps a bit tender. I took a look and decided she’d probably pulled a muscle while gardening About a month later, she noticed a lump on the front of her ...

Rachel Brosnahan is classically chic on set of The Marvelous Mrs. Maisel inside Grand Central Station in the heart of New York City

Rachel Brosnahan was spotted decked out in vintage-inspired attire as she filmed a scene of the hit Amazon series, The Marvelous Mrs. Maisel, inside Grand Central Station earlier on Friday. The talented actress, 32, donned a vibrant teal ensemble, and was also seen conversing with her leading co-star, Alex Borstein, ...


View more: Rachel Brosnahan is classically chic on set of The Marvelous Mrs. Maisel inside Grand Central Station in the heart of New York City

Video: The Strictly star who's already captured all our hearts: Retired Olympic swimmer Ellie Simmonds reveals she would love to have children one day... and it 'wouldn't matter' if they are 'a dwarf or average height'

Julianne Hough is the epitome of Parisian chic in a voluptuous black mini dress and totes a £1,700 YSL bag as she steps out during Fashion Week

Bruce Willis denies that he sold his digital likeness to a deepfake-producing company... after his image appeared in a Russian ad campaign

Video: The 'terrifying' figure you need to enjoy a 'comfortable' retirement - and it's a LOT more than Barefoot Investor Scott Pape's recommendation

Huge 215ft tall steelworks is blown up using 1.6 tonnes of explosives in the UK's biggest demolition of its kind in 75 years

EXCLUSIVE: Defiant mum-of-three says she will breastfeed her son until he is NINE if that's what the boy wants - and her only regret is not being able to nurse two of her children at once

'We're working on Helen's sexiness': Gorka Márquez warns Strictly partner Skelton to spice up her performances as she insists she's more 'functional' and 'efficient' than sensual

The Bachelor's Jed McIntosh releases emotional new single after his season of the dating show was postponed until 2023: 'Please just let me drown'

IND vs SA, 2nd T20I: Rahul Dravid all praise for THIS Indian pacer says, 'He is a really mentally strong cricketer '

College Football Fans Are Not Happy With Gary Danielson Today

Princess Athena of Denmark, 10, is being BULLIED in school after being dramatically stripped of her title as her royal parents defiantly vow to 'defend' their children

JENNI MURRAY: The terror of being a teen in the shadow of Ian Brady and Myra Hindley

Truss tells Tory rebels ‘there is no option but to change’

Video: Victoria Beckham toasts her Paris triumph (and thawing of wedding feud) with shots of £600 tequila

SNP says ‘worst yet to come’ under Truss premiership

Paris Hilton’s 18-day search for her chihuahua ends: Experts believe the heiress’s pooch was snatched by a hungry coyote in the Hollywood Hills

Video: Shailene Woodley sizzles in a black gown with VERY daring leg split while Thylane Blondeau opts for a leggy mini dress as they lead the stars at the Monot show during PFW

Fury as vile eco-cretin, 21, pours bucket of FAECES on memorial to Captain Sir Tom Moore in a bizarre and sickening protest over private jets

Dapper Paul McCartney the day tipper... and 50 years on, he still looks fab in a double-breasted suit

Video: Graham Potter admits Chelsea were LUCKY Thiago Silva wasn't sent off against Crystal Palace before the Brazilian set up their equaliser... as he hails the Blues' for their 'character and spirit' to earn a late win

Pout of control! Lauren Sanchez puckers up as she dines with Jeff Bezos during Miami vacation - days after Amazon CEO's ex-wife Mackenzie Scott filed for divorce from second husband

EXCLUSIVE: Boy George signs for I'm a Celebrity... Get Me Out of Here! and secures the biggest pay cheque EVER as he is offered almost $1m to appear

Video: Man City boss Pep Guardiola insists there will be 'zero problems' after he leaves the club... as the Spaniard's future at the Etihad remains unclear with his contract set to expire at the end of the season