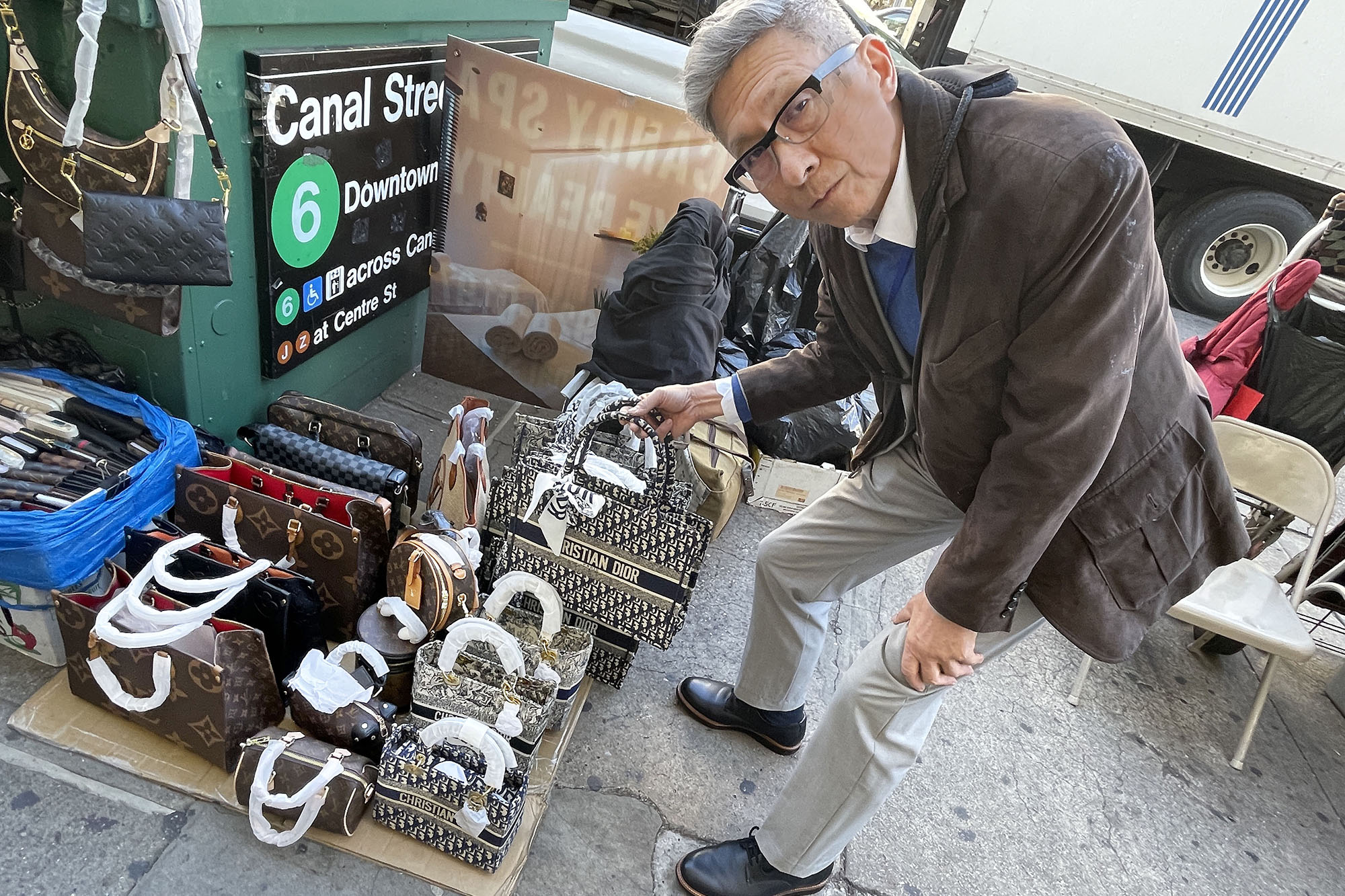 Three months after a massive NYPD sting netted as much as $2 million in knockoff designer goods — peddlers of faux Fendi and pirated Prada are out in full force again, locals griped.

“They just have no shame. They just take over the public sidewalk,” said one visitor to a three-block stretch of Broadway, off Canal, which is again blanketed with bogus Louis Vuitton, Christian Dior, Hermes, Chanel and Gucci handbags, along with belts, hats, jewelry and socks.

On a recent Thursday, two dozen brazen hawkers were enjoying a brisk business while two uniformed police officers did nothing — and it was only noon.

“There are A, B and C grades of this stuff,” one seller told The Post about the quality of the fakes. Of course he deemed his wares “grade A.” 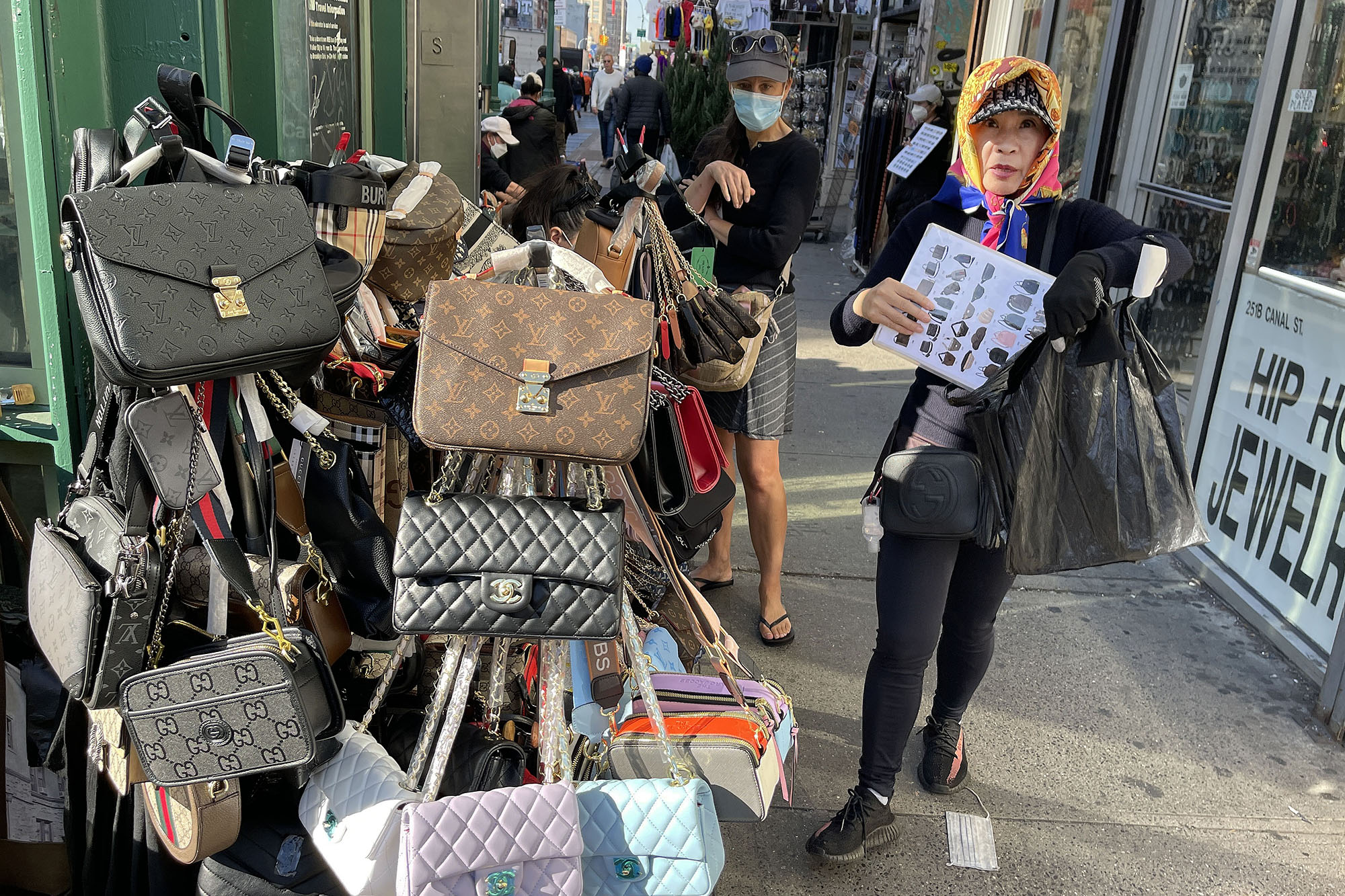 Peddlers of faux Fendi and pirated Prada are out in full force again on Canal Street.

There is an unspoken understanding between buyer and seller that the Chanels are a sham. They haggle about price.

More than 700 people have signed a petition supporting efforts to add more cops along Canal Street and the surrounding blocks of Church, Mercer Street, Lispenard Street and Broadway. “All passersby deserve to walk, live, and do business without harassment or aggressive solicitation, especially by those vending illegal counterfeit goods and unlicensed/controlled drugs etc.,” wrote the petition organizer, Raphael A.

“It’s a slap in the face to other businesswomen and men who go by the rules and it’s become very dangerous for pedestrians,” posted Patrick Valentino to the online petition. “I don’t begrudge someone making a living. I do when they do it at the expense of others.” 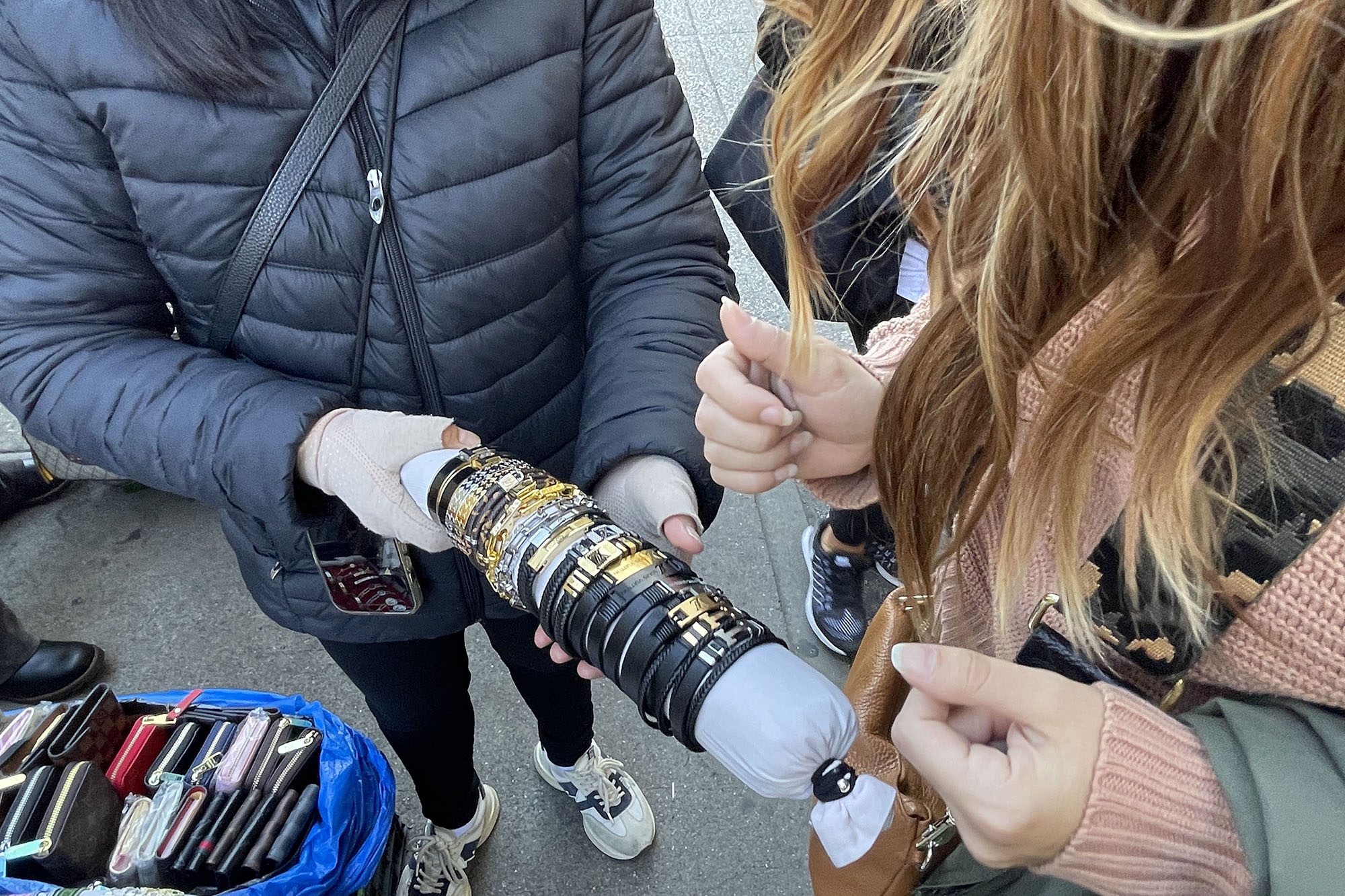 Counterfeit costume jewelry is shown to a customer 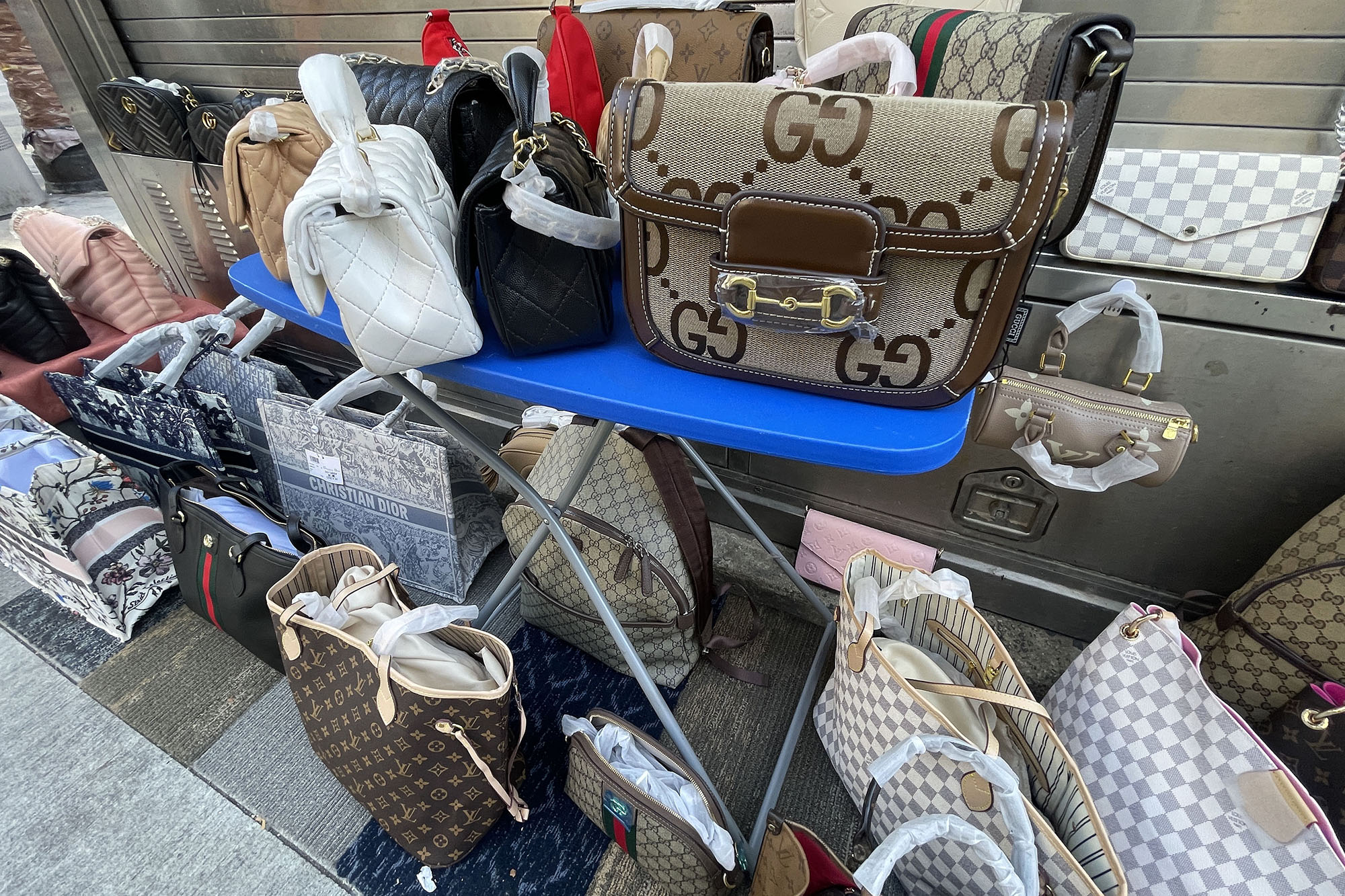 People have complained about sidewalks being blocked by the counterfeit operation.

Echoed Richard Kurtz: “The crowds of people selling bogus stuff is totally off-putting and illegal and creates human pollution and makes walking on Canal Street intimidating and uncomfortable. The police have been useless in dealing with this problem which has been a factor in our neighborhood for years.”

The nothing-to-see here attitude by the cops on Canal is a far cry from just three months ago, when the NYPD trumpeted the quality-of-life takedown they called “Operation Bag Guys.”

“The money that is raised by the sale of these counterfeit goods, are used to further other crimes throughout the city,” said NYPD Deputy Chief Benjamin Gurley at the Aug. 12 press conference. “We will go wherever, and whenever, we need to go to stop these kind of crimes and furthering crime throughout our city.” 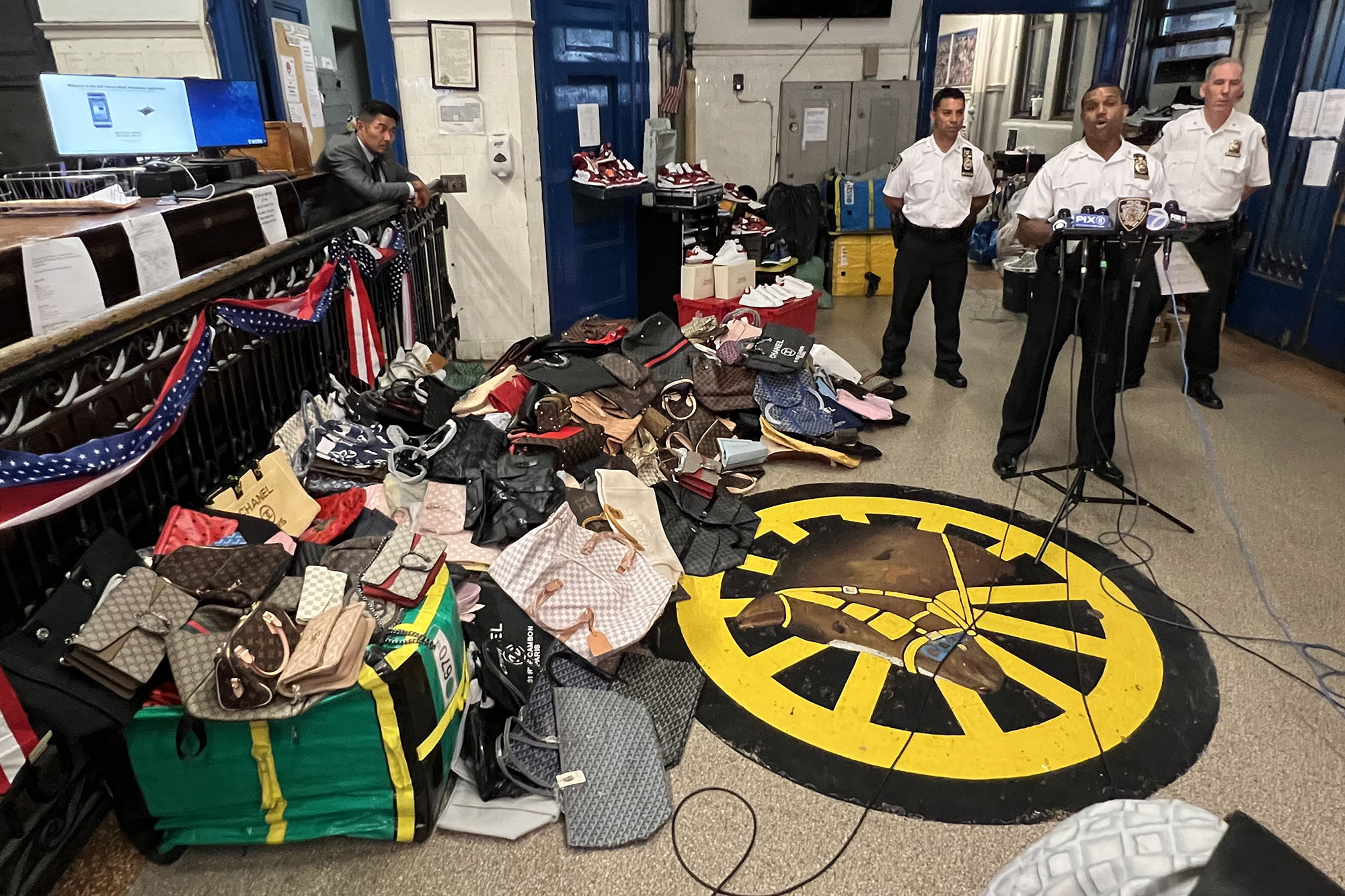 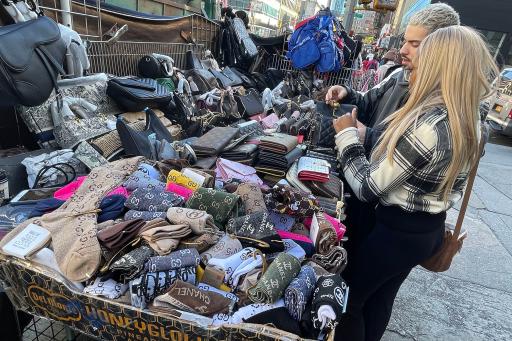 Buyers are aware that they are purchasing fake designer goods.

Wellington Chen, executive director of the Chinatown Partnership Local Development Corp., called the counterfeit comeback on Canal a “cat-and-mouse game,” adding, “It is deja vu all over.”

Calgary entrepreneur Manjit Minhas has been named the new honorary lieutenant-colonel for the Queen’s Own Rifles of Canada and will be meeting with the Queen Consort this week. The co-founder and CEO of Minhas Breweries, Distilleries and Winery is well known for her appearances on Dragon’s Den but she has ...

Voltage Pictures You always hurt the ones you love, sang the Mills Brothers. Tell that to Gerard Butler, who is still feeling guilty over an incident with costar Hilary Swank on the set of their 2007 romcom, P.S. I Love You. During a recent episode of The Drew Barrymore Show, ...