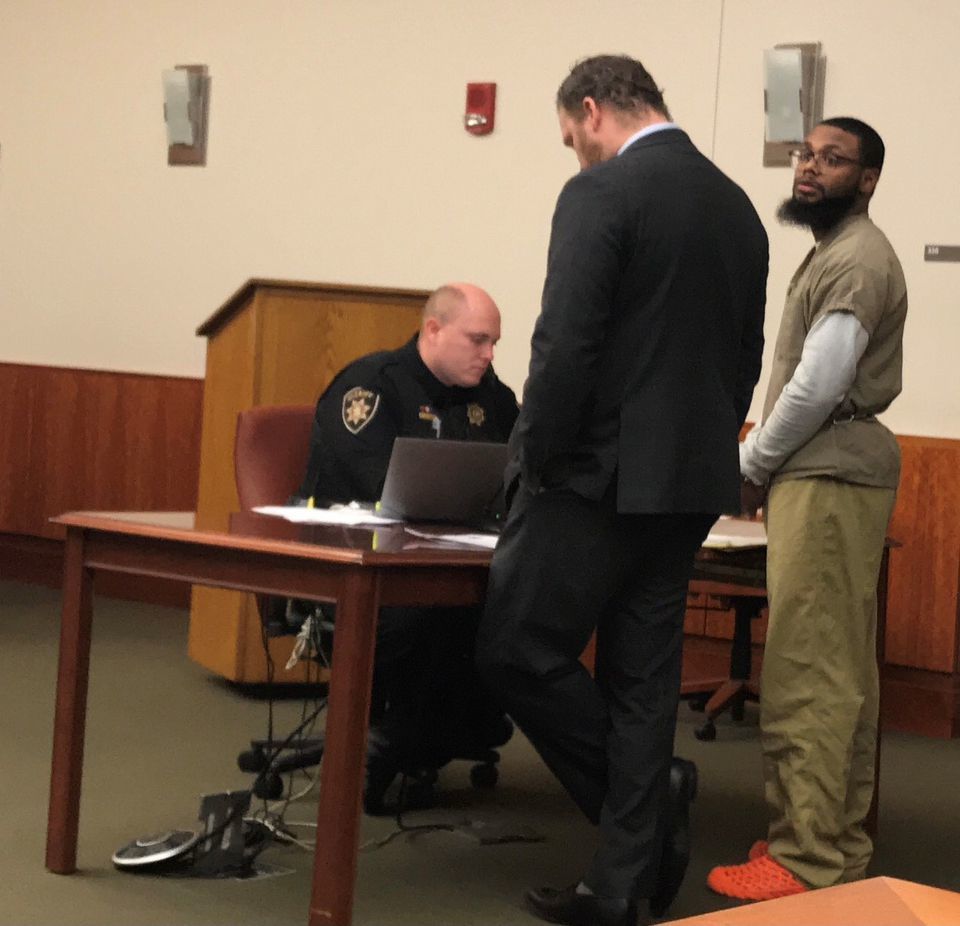 Sharrief Powell looks toward the family of murder victim Ptolemy Droz in court as he’s sentenced on Nov. 28, 2022.

Syracuse, NY — The getaway driver in a fatal shooting from December 2020 apologized to the victim’s family Monday, while his lawyer expressed concern over an alleged $40,000 bounty placed on his client’s head.

Sharrief Powell, 25, was sentenced to 20 years to life in prison for his role in the death of Ptolemy Droz on Syracuse’s South Side.

Powell has maintained that someone opened fire on his vehicle, as well, and that he did not have a gun in the shootout that led to Droz’s death.

But Powell had already pleaded guilty to a pair of illegal weapons cases at the time of Droz’s death. He was free on bail at the time of the murder. All told, he faced up to 70 years to life in prison had he been convicted at trial of everything.

So instead, he took the 20-year-to-life offer from state Supreme Court Justice Gordon Cuffy, which includes sentences for all of his crimes.

Droz’s anguished sister, E’tavia Droz, described a family in turmoil after her brother’s murder. “We’re all just messed up,” she said in court.

But she also offered a peculiar omen: that her ancestors would take revenge on Powell.

In response, defense lawyer Patrick Hennessy asserted that he’d found evidence that a $40,000 bounty had been placed on his client’s head following the murder.

“Someone was tasked with getting revenge for the family,” Hennessy said.

Powell picked up another gun charge between Droz’s death and his arrest weeks later. Hennessy said that, while his client shouldn’t have had a gun, he felt he needed protection after hearing about a threat on his life.

For his part, the judge noted that E’tavia Droz had warned only of “ancestral revenge,” and that he would “take her at her word.”

Powell turned to the family in court to offer an apology, while maintaining that he had been shot at and hadn’t fired a weapon of his own that day.

“My most sincere apologies and condolences to y’all,” Powell said. “You all know I was good friends with (Powell’s brother) Dashaun. I would never do anything to hurt you all’s family… that was never my intention that night.”

Prosecutor Michael Whalen has said that the investigation continues into who might have fired the fatal bullets that day from Powell’s vehicle.

1/28/2023 Bryan Reynolds made headlines in December when he requested a trade from the Pittsburgh Pirates. Pittsburgh responded by releasing a statement noting that Reynolds’ trade request “will have zero impact on our decision-making this offseason or in the future,” and the team is looking “forward to him having ...

10 Youngest Stars to Get an Oscar Nomination, from Anna Paquin to Haley Joel Osment

10 Youngest Stars to Get an Oscar Nomination, from Anna Paquin to Haley Joel Osment Since the very first Academy Awards ceremony took place way back in 1929, movie fans around the globe have been eager to find out what the Academy considers the best that cinema produced that ...


View more: 10 Youngest Stars to Get an Oscar Nomination, from Anna Paquin to Haley Joel Osment

A man was shot multiple times after an apparent road rage incident, according to Fort Worth police. According to police, the incident happened around 10:40 p.m. Friday night. Two drivers were traveling on East Magnolia Avenue between the intersections of South Main Street and Hemphill Street. There was “an ...

Why GM Is Investing $918 Million To Build Gas-Guzzling V8s In 2023 While a cash investment to increase production is most definitely commonplace in the automotive industry, General Motors’ latest announcement goes against the current grain of cash injections. In 2023, the manufacturer aims to inject $918 million towards ...

An HP Elitebook laptop displays a graphic of the Windows 11 logo Windows 11 came as a bit of a surprise to many users. After once promising in 2015 that Windows 10 would be the “last version” of its operating system, Microsoft released its numerical successor in late 2021. ...


View more: Windows 11 PC Settings That Are Ruining Your Experience

I Smelled an Odd Odor in My Crawl Space and Used Natural Gas Detectors to Ease My Mind About a Potential Leak Our editors independently select the products we recommend. We may earn a commission on items bought through our links. Buying your first home should be an exhilarating ...


View more: I Smelled an Odd Odor in My Crawl Space and Used Natural Gas Detectors to Ease My Mind About a Potential Leak

Woman drinking mineral water from expired water bottle We’ve all heard of the dangers of leaving a bottle of water in a heated car for too long. Is there any truth to that sentiment? There are many situations where you may need to store water for an extended period ...


View more: Does Water Expire? What to Know Before Drinking That Old Bottle of Water

3 Injured in Shooting During Argument at NW Indiana Apartment Complex

Why Jay-Z And Yo Gotti Dropped Their Mississippi Prison Lawsuit