Tech war: how a Harvard Law School graduate is helping China achieve its goal of cutting reliance on advanced US chips 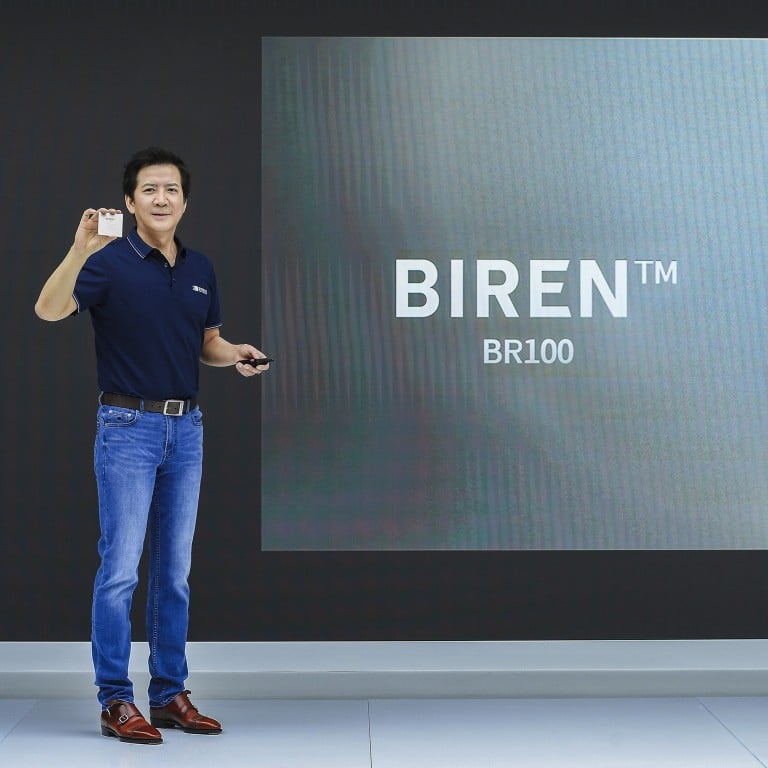 Michael Zhang Wen is not a tech geek, but the Wall Street veteran, Harvard Law School graduate, and licensed attorney in the state of New York is at the forefront of China’s efforts to reduce its reliance on US artificial intelligence (AI) chips.

Zhang is chairman of Biren Technology, a Shanghai-based start-up he founded in 2019 to focus on graphics processing units (GPU), a type of chip that is important for machine learning and big data applications. Up till now, China has relied on US-based Nvidia Corp for its supply of advanced GPUs.

However, Washington’s decision last month to restrict exports of Nvidia’s high-end A100 and H100 chips to China has cast a shadow over the country’s ability to continue developing technologies from AI to smart cars.

The US move has heightened the sense of urgency in China to find alternatives to Nvidia, as well as GPU chips from Advanced Micro Devices (AMD), which are also covered by the export restrictions.

Coincidentally, in August Biren released a new 7-nanometre GPU called BR100, with a claimed peak performance three times better than equivalent products on the market, leading some to speculate that the three-year-old start-up had a chance to become China’s Nvidia.

For Zhang, whose social media account sign-off is “an entrepreneur is someone who dares to dream the dreams”, the moment is looming to prove that Biren can deliver after it raised a whopping 4.7 billion yuan (US$655 million) from major venture capital funds such as Qiming Venture Partners, IDG Capital and Citic Securities Investment within 18 months of being founded.

Biren and Zhang declined interview requests for this story.

In a July 2022 interview with local magazine Chinese Entrepreneur, Zhang said his role was that of a “headhunter”, persuading the right people to join the firm. The article quoted Zhang as saying that his first task was to ask a Harvard alumnus to draft a list of top talent in the GPU industry, and that the alumnus told him that Biren would be successful if he could recruit half the names on the list. 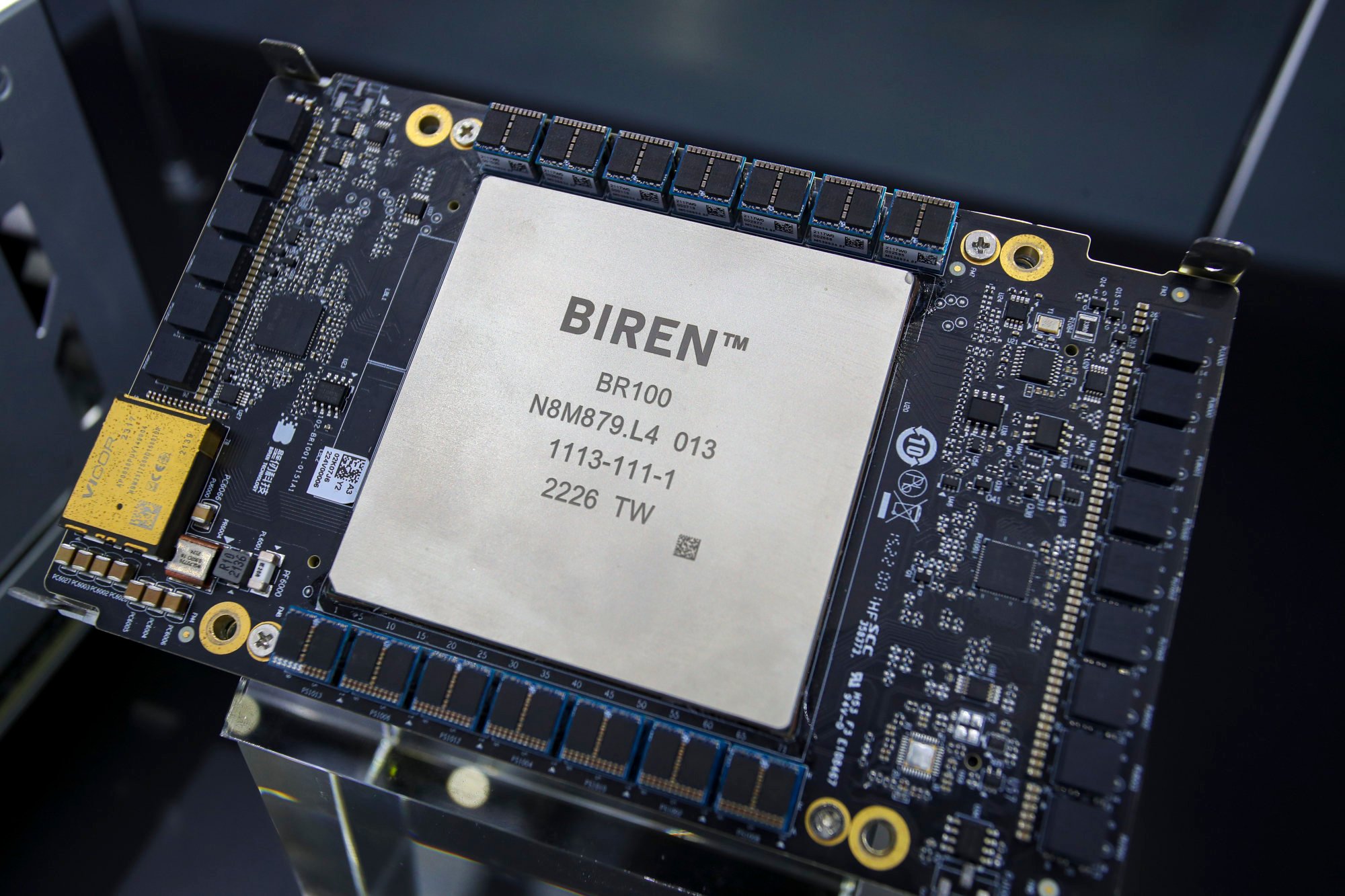 Zhang met Hong at the 2019 World AI conference in Shanghai and convinced him to join as chief technology officer after two conversations. Li Xinrong, a former global vice-president of AMD who worked for the US firm for 15 years, joined Biren as its co-CEO in 2020.

Qiming partner Zhou Zhifeng said he invested in Biren because he saw a “complete” team. “Most peers’ teams are led by directors [and] vice-presidents who left a chip giant and brought some of their juniors with them,” he was quoted as saying in a Chinese Entrepreneur article that was republished on the Qiming website.

“If the team is limited to a small circle, it’s very easy for them to [be good at one particular thing] but dragged down by their other shortcomings … We thought Zhang Wen’s team was an all-round solid one.”

GPUs are designed for more intensive computations than CPUs, or central processing units. They do this through parallel processing – using multiple processors for the task. Biren’s BR100 is a general-purpose GPU, meaning it is not just for graphics in consumer electronics, but for broader computation applications.

China’s semiconductor industry is becoming a target amid worsening Sino-US ties, providing a double-edged sword of challenges and opportunities for companies like Biren, according to industry insiders and analysts.

“US sanctions have resulted in leading international GPU manufacturers [like Nvidia and AMD] handing over part of the domestic Chinese market [to domestic GPU start-ups], creating a window of opportunity and making [end-user markets] deeply aware of the necessity for domestic substitution,” said Wang Lifu, an analyst at research firm ICwise.

However, Wang added that the domestic industry was “still at the beginning stage with low market share percentage”.

From a technology perspective, there is still a big gap between domestic GPU start-ups and Nvidia, said William Wang, CEO at Shanghai-based consultancy IC Cafe. Chinese firms “have potential in certain fields … but they are also affected by US restrictions in areas such as tape out [where the final design is sent for fabrication]. Opportunities and hopes are there, but dangers are also there,” Wang said.

A number of Chinese GPU chip start-ups have emerged in recent years, attracting public and private sector funding. Shanghai-based Iluvatar CoreX, for example, has partnerships with the Shanghai Supercomputer Centre and supply chain platform CECport – both state-backed organisations. Its Tiangia 100 chip is claimed to be the only Chinese GPU in mass production.

Other start-ups in the field that have been in the spotlight include Moore Threads and Denglin Technology, both eyeing the domestic GPU market that is forecast to grow sevenfold to US$34.6 billion from 2020 to 2027, according to India-based Verified Market Research.

These Samsung smartphones are now receiving the One UI 5.0 (Android 13) stable version

Pixel 7 vs. Pixel 6: How Google's Flagship Phones Have Changed Spec by Spec

Toyota Corolla Cross Hydrogen Concept: Clean Energy Without the Batteries—When is it Coming?

ETtech Developers can choose from business models, such as one-time purchases and multiple subscription types Apple on Wednesday upgraded its pricing for the app store for developers adding 700 price points and new pricing tools that will allow firms to set prices as per country or region, manage foreign exchange ...

A photograph of the Jarrow amphibian Keraterpeton galvani on top and a CT-image of K. galvani below showing the alteration in the bones. Credit: Dr Aodhan O’Gogain, Trinity College Dublin Scientists have solved a decades-long mystery as to why ancient tetrapods—amphibian-like creatures that lived over 300 million years ago—preserved ...

The Rivian electric vehicle (EV) manufacturing plan has been infested with bed bugs in an isolated area. The latest problem comes as the all-electric car maker is working to ramp up the production of its R1S SUV and R1T pickup. (Photo : Justin Sullivan/Getty Images) SOUTH SAN FRANCISCO, CALIFORNIA – ...

Vietnam-based electric vehicle maker VinFast announced that it has filed for an initial public offering (IPO) in the US to list on the NASDAQ. VinFast Trading & Investment Pte. Ltd, a subsidiary of Vingroup headquartered in Singapore, announced on Wednesday that it has publicly filed a registration statement on ...

Reuters Chips made by SMIC are commissioned by companies all over the world and can be found in products as diverse as cell phones and cars US senators scaled back a proposal that placed new curbs on the use of Chinese-made chips by the US government and its contractors, according ...

Singapore-based wealthcare and savings app Hugosave officially announced on Tuesday that it has become a Visa Principal Member Issuing Licensee under its parent company, Atlas Consolidated Pte Ltd. As a principal licence holder, Hugosave will now be able to issue Visa cards directly, as well as sponsor associate licences ...

Slag heaps near Solstad copper mine today. Credit: Helena L Filipsson A closed copper mine on the Baltic Sea coast just south of Västervik has helped researchers study the capacity of coastal diatoms to survive when the environmental conditions change. A thesis from the University of Gothenburg shows that ...

ReutersAn Australian court fined Uber Technologies Inc A$21 million ($14 million) on Wednesday for threatening cancellation fees it never charged and overstating fare estimates on some rides.The penalty was less than a regulator wanted.The Australian arm of the U.S. ride-sharing app broke consumer law by misleading customers with warnings they ...

Overcoming the Challenges to Becoming a Global Digital Marketer - YouYaa

Could new cancer drugs come from potatoes and tomatoes?

Imec to cooperate with Japan's Rapidus on 2nm technology

'No place for killer robots in our city': San Francisco abandons controversial policy after backlash

The significance of TSMC building fabs in US

How dinosaur named after Ghostbusters monster went into battle

Channel Asia Innovation Awards 2022: and the winners are....

Microsoft may be building its own super app

TCS' Cognix impacts deals worth over $1.8 billion in two years

Ankylosaurs battled each other as much as they fought off T. rex

Government Pushes Real ID Deadline Back 2 Years Due to Covid

Apple will soon be using chips made in America, says CEO Tim Cook

Trust Me, Once You Try a Galaxy Fold, You'll Never Go Back

Lensa, the AI portrait app, has soared in popularity. But many artists question the ethics of AI art.

US President Joe Biden visits TSMC plant in Arizona, a symbol of his chip-making agenda

European scientists are developing nuclear waste batteries for use in space

Cultivating a music studio to sound like an indoor forest

What AI-generated COVID news tells us that journalists don't