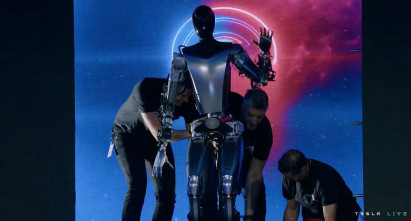 Elon Musk has shown off a prototype humanoid robot walking and waving its hand, seeking to demonstrate advances in artificial intelligence made by Tesla.

At the electric automaker’s AI (artificial intelligence) Day late Friday, Musk also showed a video of the robot picking up boxes and moving through a rendered office building to water plants.

“The robot can actually do a lot more than we just showed you,” said Musk. “We just didn’t want it to fall on its face.”

A second robot — the latest iteration of what Tesla calls Optimus — also appeared on stage. Musk said that while Optimus was not quite ready to walk, it has opposable thumbs and can perform tasks.

“Our goal is to make a useful humanoid robot as quickly as possible,” said Musk. “Optimus is designed to be an extremely capable robot made in very high volume, probably ultimately millions of units, and is expected to cost much less than a car.”

The event, held at a Tesla facility in Palo Alto, California, featured several engineers giving highly technical presentations about how the robot perceives its environment. The technology that Tesla has developed for its vehicles, including cameras, is now being used for the robot.

‘Time is Not Running Out. Look at Surya, for Inspiration’: Sanju Samson’s Childhood Coach on Lack of Opportunities “Just keep your chin up, your time will come… apna time aayega” Sanju Samson’s childhood coach  sent him a text a few days back when the right-hander continued to warm the ...


View more: ‘Time is Not Running Out. Look at Surya, for Inspiration’: Sanju Samson’s Childhood Coach on Lack of Opportunities