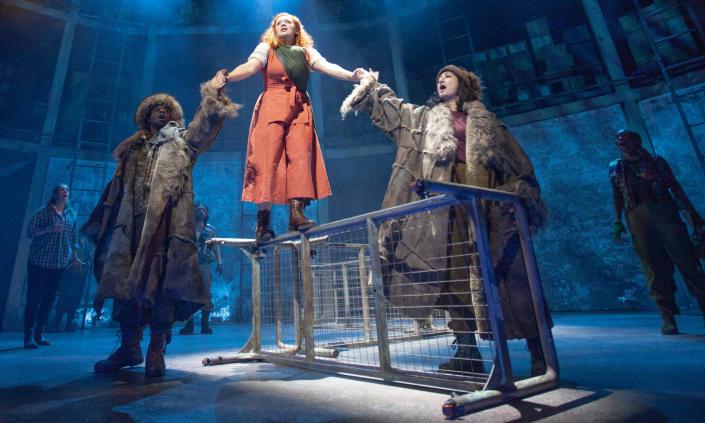 First there’s the prologue. Then the play-within-a-play. Finally, a second half with a knotty back-history of its own. And it’s all shot through with song. That’s an awful lot of storytelling to get through in Brecht’s parable about motherhood and justice. Director Christopher Haydon has an excellent stab at it in this playful and music-infused production, lit up by Michael Henry’s dark and jagged score. But running at nearly three hours, the show ultimately feels a bit bloated.

Adaptor Steve Waters sketches in the context with brisk, light strokes in a script woven through with contemporary allusions. We are in a country in the throes of civil war. When the governor is beheaded in a coup (his decapitated head represented by a carved-up melon), his preening wife flees. She remembers her fancy clothes but forgets her son. Brecht’s unlikely heroine is the governor’s maid, Grusha, who is left to take care of the baby and, in an increasingly perilous journey, tries to find refuge in a landscape ravaged by war.

Grusha is played by Carrie Hope Fletcher, who has made such an impact as a musical singer in shows including Les Misérables. She makes light work of Henry’s striking folk-inspired score, which is always on the move, reaching for harmonies and resolutions it never quite finds. Fletcher’s clear voice cuts through the clamour and unrest. With the help of the spare but moving melodies, she expresses how one might create hope out of hopelessness, clutch love from thin air; build a family from the very shakiest of foundations.

The ensemble cast conjure up Brecht’s plethora of characters with childlike gusto, aided by Oli Townsend’s vast but nimble set. Zoe West’s Singer is a sort of grungier version of the narrator in Joseph and the Amazing Technicolor Dreamcoat, as she bounds about with her guitar and fills us in on Brecht’s ever-expanding story. Jonathan Slinger, meanwhile, oozes presence as comedy judge Azdak, who suddenly pops up in a second half that feels removed from the preceding action. But with so much energy poured into the first half, it’s as if the show runs out of storytelling puff – just when it is needed the most.

Prepare to bundle up, Los Angeles. Cooler temperatures are expected to hit the region over the next few days, bringing chilly nights, cloudy skies and a 30% chance of rain headed into next weekend. The forecast is still fluctuating, National Weather Service meteorologist Joe Sirard cautioned Saturday. The current ...

The B.C. government announced on Saturday that 75 new affordable rental homes will be available for families, seniors, and people with “low to moderate incomes” in Coquitlam, B.C. The rental housing is at the Mountain View Suites in the Austin Heights neighbourhood of Coquitlam. “We know people in Coquitlam need ...