The iPhone's New Battery Icon Was So Bad, Apple Already Fixed It in iOS 16.1 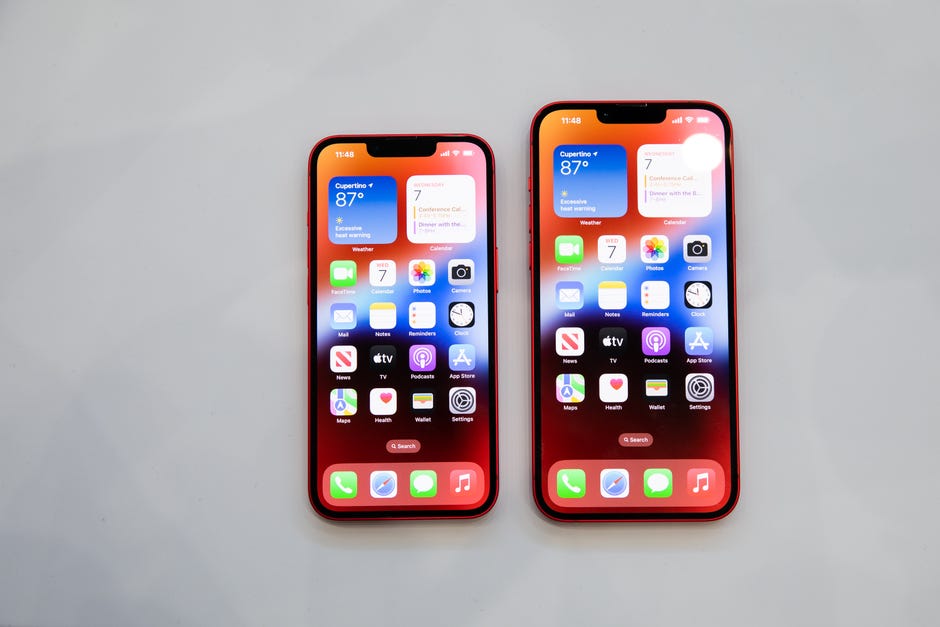 Apple nixed the battery percentage from the iPhone’s status bar with the release of the iPhone X back in 2017. The company needed to make room for various sensors —  infrared camera, proximity sensor, microphone, etc. — in the new minimized notch, and so it got rid of it.

And now it’s back.

Apple reintroduced the battery percentage to the status bar, albeit redesigned, with the release of iOS 16, which you can download right now. Many, including myself, are happy about the resurrected battery indicator, but others are less pleased. Some are upset because they won’t be receiving the battery icon on their phone, even if they update to iOS 16. Others are disappointed because they feel Apple could have done more to make the icon useful.

And it turns out that Apple has been listening to its users. Apple has released a couple of iOS 16.1 developer betas since the release of iOS 16, and both updates address the two major complaints about the new battery icon: support and design.

Here’s what you need to know.

What’s the deal with the battery status meter on the iPhone?

iPhones used to include the exact percentage of your battery right in the status bar. But after the release of the iPhone X, which introduced the notch — the black bar at the top of your device that houses a speaker and camera — there wasn’t enough screen real estate left to keep the battery percentage in the status bar, so Apple nixed the feature.

iOS 16 reintroduces the battery percentage number back in the status bar, inside of the existing battery icon.

Which iPhone models won’t get the battery percentage feature back?

Not all iPhone users with iOS 16 will see the new battery percentage feature in the status bar, which is frustrating for some. Although there hasn’t been an official statement as to why certain models are excluded from the feature, it seems to be because of lower pixel density for some of the devices, and lack of space for others.

According to this Apple support page, the following models don’t support the feature:

However, the new battery percentage feature will come to the iPhone XR, iPhone 11 and iPhone Minis with iOS 16.1, which was released last week for developers. You can check out how to download it here, but it should be pushed out to the general public soon enough.

Not everyone is happy with the design of the new battery percentage icon. Although the battery percentage itself is always visible in the status bar on supported devices, the battery icon itself always shows as full, whether the phone is idle, charging or on low power mode — only the color changes. So it can be a bit confusing if you just glance at it.

The only time the design really changes is when the battery reaches 20% or less — the battery icon then shows as depleted, or about a fifth full, and turns red.

On Twitter, Mikael Johansson created a mockup that shows the battery icon changing along with the percentage. Thousands of people have liked the tweet and many have agreed it’s an improvement over the current design.

Apple listened and is redesigning the battery percentage icon with iOS 16.1

Apparently, Apple has heard the criticism leveled by iPhone users and redesigned the battery percentage icon with iOS 16.1, which is currently in its second developer beta. As the mockups that Mikael Johansson posted online showed, many people preferred a battery icon that drained, along with the percentage.

And that’s exactly what Apple is changing the battery icon to, as you can see in the tweet below posted by Federico Viticci. Instead of just the percentage going down, the battery icon design depletes as well, making it easier to see how full (or empty) your battery life is.

However, iOS 16.1 is still a ways away from releasing to the general public. If you really want it now, here’s how to download the developer beta.

Regardless of your thoughts on the design, you should at least take a chance on the battery percentage feature if your iPhone supports it.

To view your battery percentage in the status bar of your iPhone, all you need to do is upgrade to iOS 16. You can wait for your iPhone to alert you with a pop-up notice, or force an update manually by going to Settings > General > Software Update.

Once you update, you should see the percentage in the battery icon in the top-right corner of your screen — from anywhere on your iPhone. That way you can keep a close eye on when your iPhone is topped off or close to running out of battery, and when you should start charging it. 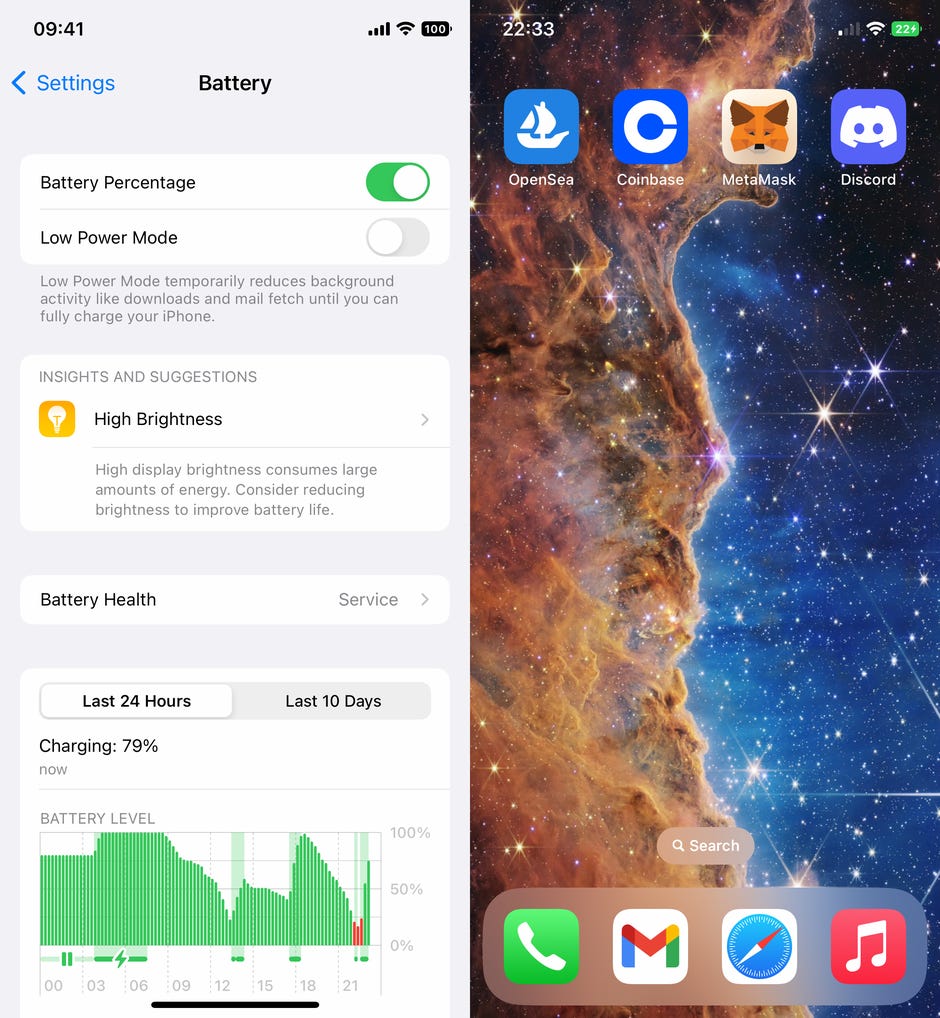 If you toggle the Battery Percentage feature off, you’ll remove the numbers from the status bar and revert back to the old battery icon design. Nelson Aguilar/CNET

Preorders for iPhone 14 are open, and the phone itself will be available Friday, Sept. 16. For more, learn everything Apple unveiled at its “Far Out” event last week.

How to Remove the Search Button on an iPhone Home Screen

The iPhone 15 ‘Ultra’ could replace the Pro Max

AirPods Pro 2 can use ear tips from the original version

New Mac mini, iPad Pro models with M2 may not get an event

A YouTuber has put Apple’s claims for the durability of the Apple Watch Ultra to the test by repeatedly hitting it with a hammer after the watch failed to show any damage following a drop test. TechRax, a channel popular for testing the durability of products, first tested the ‌Apple ...

The iPhone 14 series (except iPhone 14 Plus) are already shipping out to users globally. In addition, Apple Watch Series 8, Apple Watch Ultra, Apple Watch SE 2, and AirPods Pro 2 have been launched for sale. However, the launch of these devices is not the only thing Apple did. ...

Can an apple a day really keep the doctor away? Here’s what research says

Apples are stacked for purchase at Rancho Market in Clearfield on Tuesday, Sept. 13. Fall has officially begun and it’s time for nature’s crispiest fruit to shine: apple season is here. Whether its used in a salad or a pie or as the main course, this nutrient-rich food is ...


View more: Can an apple a day really keep the doctor away? Here’s what research says

Late 2022 MacBook Pro buyers can look forward to faster macOS notebooks. Image: Ed Hardy/Cult of Mac There’s overwhelming evidence that Apple is about to reveal the M2 Pro and M2 Max, a fresh generation of high-performance processors for notebooks. These are expected to go into the next generation ...

AppleInsider is supported by its audience and may earn commission as an Amazon Associate and affiliate partner on qualifying purchases. These affiliate partnerships do not influence our editorial content. Musician Rihanna will be headlining the first Apple Music Super Bowl Halftime Show, taking to the stadium stage during Super ...

Now That iOS 16 Is on Your iPhone, Do These 3 Things Immediately

Set up your iPhone correctly before you explore everything new in iOS 16.


View more: Now That iOS 16 Is on Your iPhone, Do These 3 Things Immediately

Why Is Everyone Talking About Apple?

Why Is Everyone Talking About Apple? As the highest-valued company in the world with a market cap of $2.5 trillion, Apple (NASDAQ: AAPL) regularly makes headlines. However, public scrutiny often increases around September, when Apple regularly announces its updated lineup of iPhones and other products. This year has been ...


View more: Why Is Everyone Talking About Apple?

Mom Sees Her Stolen Car Outside Applebee's, Livestreams Herself 'Stealing It Back'

Five Major Products to Expect From Apple in 2023

iPhone 14 Pro, Pro Max continue to be high in demand

No Apple Event in October? New iPads, Macs May See a Soft Launch

Apple rumored to announce new iPads and Macs through a press release, not an October Apple Event

Save 55% on a MacBook Air during our Refurbished Event ending Sept. 30

Apple Maps vs. Google Maps - which one is best?

Annoyed by These iOS 16 Features? How to Get Them Off Your iPhone

How to Create Apple ID on iPhone, Mac and PC