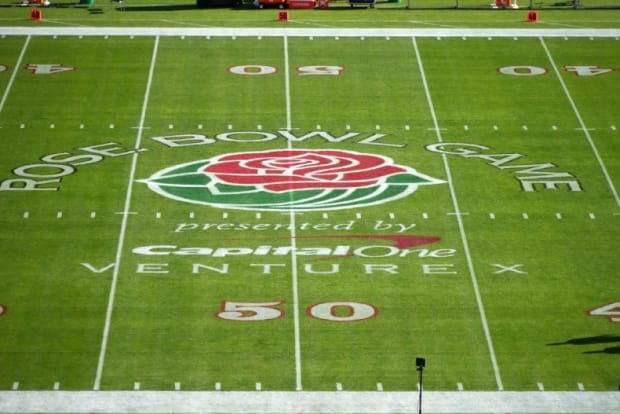 Recent discussions over expansion to the College Football Playoff have left one historical bowl game uncertain about its future.

In every season since the change to the four-team playoff format, the Rose Bowl has either hosted a semifinal game or held their matchup in the prime television slot on New Year’s Day.

As an expanded postseason looms, though, these Rose Bowl traditions have become hurdles for the College Football Playoff committee to overcome.

Not looking to give up their traditional date and time slot, the Rose Bowl has reportedly sent a proposal to the CFP requesting that they host a semifinal in two out of every three years, assuming they are held on New Year’s Day.

According to a Sports Illustrated article covering the Rose Bowl’s proposal, the “Granddaddy of Them All” is the only major bowl game not currently on board with the College Football Playoff’s expansion plan. The other five, the Sugar, Orange, Peach, Fiesta, and Cotton Bowls, have all shown support on amending their contract to expand early.

Per the CFP’s proposal, the six participating bowls would rotate between hosting quarterfinal matchups on New Year’s Day and semifinal games later in January. The Rose Bowl, scheduled to be a quarterfinal in 2024 and 2025, would retain its New Year’s Day kickoff for least those two seasons.

After many long months of deliberation, it’s unclear how the College Football Playoff committee will react to the latest proposal from the Rose Bowl.

However, and considering the delay is in large part due to the Pasadena bowl game, it’s likely that very little compromise will be shown by the playoff’s governing body.

How Do Long-Haul Cabin Crew Relax On Aircraft With No Dedicated Rest Areas?

Report: NWSL to expand in Boston, Utah and California

Kari Lake Wants the RNC to Float Her Legal Bills

Katy Perry said she declined to work with Billie Eilish because she thought her song 'Ocean Eyes' was boring: 'Huge mistake'

A man died after being shot on the east side of Indianapolis early Saturday morning, according to the Indianapolis Metropolitan Police Department. Officers responded to the shooting in the 1900 block of North Oxford Street around 5:30 a.m. and found the victim with gunshot wounds. He died at the scene. ...

In the NFL playoffs, the 49ers visit the Eagles. Read here to check out what happens if San Francisco win over Philadelphia in the NFC Championship game. The San Francisco 49ers are on an incredible twelve-game winning streak. The trade to acquire running back Christian McCaffrey changed their entire season and then rookie quarterback Brock Purdy ...

Breaking news A loud blast was heard at a military plant in Iran’s central city of Isfahan, but a security official said there were no casualties, Iranian state broadcaster IRIB said on its website early on Sunday. “The explosion took place in one of the munitions manufacturing centers of ...

A monster upset is brewing in Norman. The Oklahoma Sooners walked onto their home court as massive underdogs vs. No. 2 Alabama on Saturday. But just over six minutes into the second half, OU finds itself up almost 20 points on the 18-2 Crimson Tide. Fans reacted to Alabama ...

A lawyer for Desmond Mills Jr., one of the five former Memphis cops charged in the fatal beating of Tyre Nichols, has indicated his client may not have been able “to see” — because the officers accidentally pepper-sprayed themselves during the vicious beatdown. “Some of the questions that remain will ...


View more: Memphis cop Desmond Mills Jr. might not have been able ‘to see’ during Tyre Nichols beating: lawyer

Olivia VanDamme, left, cries as shes comforted by Jamison Stegmagier, of Half Moon Bay, during a candlelight vigil in honor of the mass shooting victims at Mac Dutra Park in Half Moon Bay, Calif., on Friday, Jan. 27, 2023. Family members, co-workers, city officials and members of the community ...

Everything Leaving HBO Max in February 2023 Whatever your feelings might be about the Warner Bros. Discovery merger and subsequent restructuring, there’s no denying the fact that HBO Max continues to be one of the best streaming services available on the market. Part of that is definitely thanks to ...

How to Watch No. 1 Purdue Basketball vs. Michigan State on Sunday

Former VP Mike Pence says he takes 'full responsibility' for classified documents found at his Indiana residence: 'Mistakes were made'

11 Best Astrology Apps In 2023, According To Astrologers, Astrologists, And The Internet

T.J. Holmes and Amy Robach will not return to "GMA," network says

In A Chilling Interview, Paul Pelosi's Attacker Said He Had A Message For All Americans: "You're Welcome"

Bus Bros. have early disappointment at Rolex 24 at Daytona

What Is Data Manipulation Fraud and How Can You Avoid It?

Rod Stewart Offers to Pay for Hospital Scans in U.K.

Feline Feetsies of Fluffy Heaven: 31 Cat Paws That Will Melt Your Heart With All Their Fluffy Goodness

5 Justin Fields trades the Bears could make and take Bryce Young No. 1

Moisturize and Even Your Skin with the Right Foundation

She Signed Up To Be A Female Pilot After Hearing An Ad On The Radio, And What She Accomplished During World War II Is Quite Remarkable

Chromecast vs. Roku: Which One Is Best for You?