Thiruchitrambalam Movie Review: This is a cute, worthy successor to Velai Illa Pattadhaari 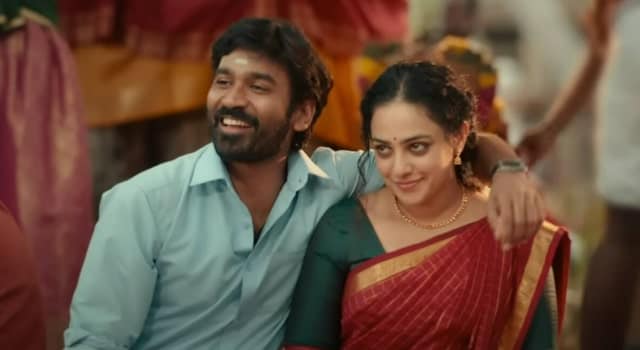 There’s an easy vibe with which Bharathiraja (as Pazham Sr.) and Dhanush (as Pazham Jr.) interact in Thiruchitrambalam. To begin with, their characters share the same name – and the nickname. They appear more like friends who are comfortable with discussing their hardships and love interests. You don’t see that kind of a relationship in Tamil cinema usually. They have a strong chemistry that rests on mutual dependence and affection. And between these two men, there’s Neelakandan (Prakash Raj), a tough cop, who seems to have forgotten how to smile.

Neelakandan and Pazham Jr. communicate via Pazham Sr. It doesn’t take too much time to guess what may have gone wrong there. And despite the gloominess, both Pazhams offer plenty of laughs. The jokes may not necessarily appeal to viewers who catch a few glimpses here and there. They work only within the context of the film. Velai Illa Pattadhaari (2014) doesn’t have that problem; even now you can pick a random scene that features Vivek and laugh your heart out. But Thiruchitrambalam somehow feels personal. It is, perhaps, a window into an ordinary man’s life, whereas VIP opens a window into an engineer’s life. Engineers are also ordinary people, but Dhanush’s character was hungry for success in that movie.

If you’re looking for commonalities, I’ll give you another one that will help you seal the deal. Pazham Jr. has a friend who lives a stone’s throw from his house. Shobhana (Nithya Menen) walks into and out of his abode without as small as a courtesy knock. And Pazham Jr. does the same. These neighbors are childhood friends who’ve seen the highs and lows together. They also know each other’s strengths and weaknesses. Shobhana always has his back. And she won’t think twice to reprimand Neelakandan, or the good-for-nothing folks who mock her best friend in a theatre.

Pazham Jr. works as a food delivery agent and Shobhana works at a place where she’s required to bury her head in a laptop. Writer-director Mithran Jawahar reveals quite early on that there’s something bothering his male lead – probably a bad incident that results in Pazham’s education hitting a roadblock. It’s a well-rounded nugget that gets a great amount of attention. And it even motivates the hero to finally cross that mental barrier in an important scene that involves his father.

Thiruchitrambalam is as much a story of love as it is about letting bygones be bygones. The father and son refuse to confront their demons because they fear it may not take the right direction. Their refusal to look at the truth in the eye leads to passive aggressiveness. And the acting by the primary cast members in these pertinent moments is top-class. When Dhanush sends his plate flying, Raj picks it up and bangs it again to show that he can do it, too. It’s a superb scene that cuts right into the middle of their bitterness. And as though a light has suddenly been turned on, the pacifier grandpa jumps in to fan the tempers.

And apart from the impeccable men, what I liked most about this movie is that Jawahar treats the love stories carefully. The conversations that Pazham Jr. has with his crushes (played by Raashi Khanna and Priya Bhavani Shankar) are delicately fine-tuned. They don’t bring extra words, or unnecessary gestures, to the table. And since we’re solely tracking the hero’s journey, Jawahar doesn’t bother to fiddle with the afterthoughts of the crushes. He does that only when it comes to Shobhana because she’s just like any of Pazham’s other family members.

There are several scenes that deserve a hat tip and one that I remember and cherish the most is the candid indifference that Ranjani (Bhavani Shankar) displays when Pazham Jr. asks for her phone number so that he can text her later. She hits the nail on the head with a simple, “Why should we keep in touch?” It’s a brilliant line because she has no idea about him. They’re not friends; they are not even acquaintances. Why would she be interested in him? Jawahar, with this single scene, has grown as a filmmaker by leaps and bounds.

For a director who’s mostly made remakes (Yaaradi Nee Mohini, 2008; Uthamaputhiran, 2010), the richness of Thiruchitrambalam will surely yield fresh fruits. And I’d be happy to watch a sequel that shifts the gaze towards Shobhana’s aspirations. Although she’s present throughout the film, Jawahar doesn’t dive into her psyche. Does she drink beer at her home the way the Pazhams do? I don’t know. But I do know that this is a cute and worthy successor to VIP (with a fun album by Anirudh Ravichander).

Thiruchitrambalam is playing in cinemas.

Karthik Keramalu is a writer. His works have been published in The Bombay Review, The Quint, Deccan Herald and Film Companion, among others.

CLEVELAND (AP) — José Ramirez drove in two runs and had four hits, Aaron Civale pitched six solid innings and the Cleveland Guardians defeated the Kansas City Royals 9-2 on Wednesday in their final tune-up for the postseason. Cleveland opens the wild-card round against Tampa Bay on Friday at ...

An angry man's hour-long shooting in suburbia without doing much to disguise himself was a “mad act”, a medical expert has told a jury. Bradley Jason Mark White, 42, has pleaded not guilty to murdering Byron Tonks and injuring two other people when he fired more than 200 bullets ...

Glitch: An exciting new Netflix release is coming on Friday for K-drama fans