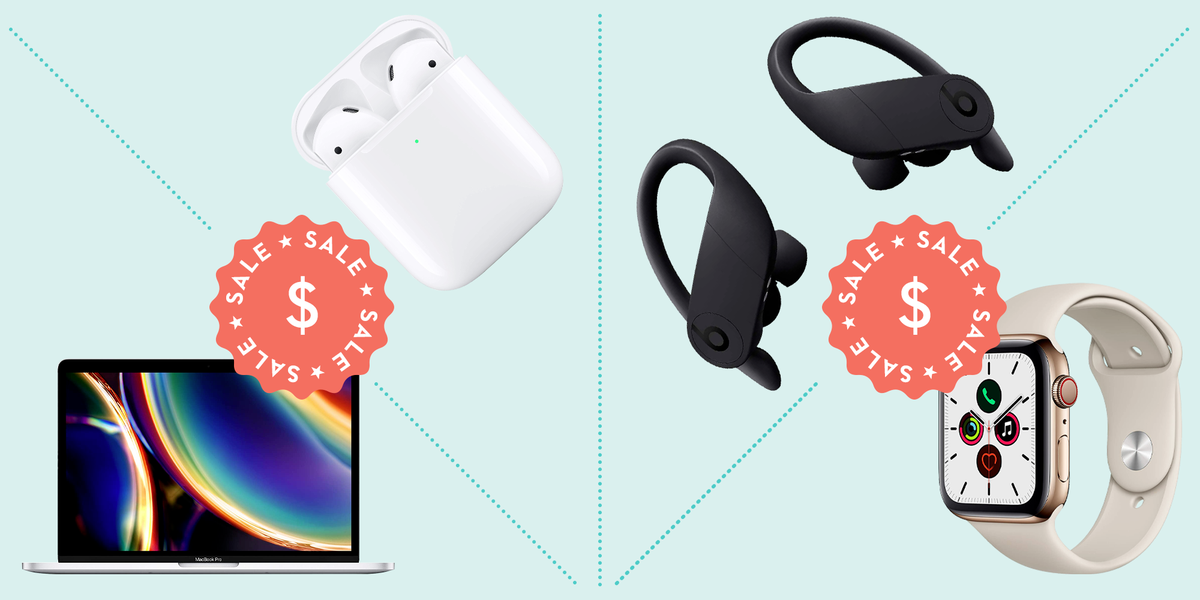 This year is just flying by, and before we know it, everyone’s favorite sale event will be here: Black Friday. The penultimate holiday shopping day is coming up this week on November 25, and alongside tons of deals on clothing, furniture and mattresses, you’re bound to find steep discounts on tech, including highly anticipated Black Friday Apple deals.

EVERYTHING TO KNOW ABOUT BLACK FRIDAY 2022

Year after year, Apple’s latest gadgets make their way to the tip-top of millions of wishlists: AirPods, Apple Watches, iPhones, iPads and MacBooks are among the most coveted gifts out there. But if you’re an Apple user yourself, you’ll know that all of those gadgets are also big-ticket items and sales are few and far between. Luckily, we’ve done our research to answer all your pressing questions in time for Apple’s 2022 Black Friday deals, ahead.

Does Apple do Black Friday sales?

Sort of. While you can find Apple products on sale during Black Friday at retailers like Amazon and Walmart, Apple’s own Black Friday and Cyber Monday promotions are not major sales. In past years, they’ve given out free Apple Store gift cards worth up to $100 to customers who buy eligible products at full price, and we are expecting the same promotion this year. The store card makes a pretty sweet accompaniment to any Apple gift you’re giving but is much less compelling for those hoping to save upfront.

What are the best places to buy Apple products on Black Friday?

What are the best Apple Black Friday deals in 2022?

This is the first time that the new 2nd Generation AirPods Pro have gone on sale since they were released in September 2022. They feature upgrades from the original AirPods Pro, including 2x more active noise cancellation, a custom-built driver for even better audio quality, and a fourth set of ear tips for a more customizable fit.

Backed by over 547,000 reviews and an overall rating of 4.8 stars, Apple’s second-generation AirPods are by far the most popular AirPods on Amazon. They’re also the most affordable model of AirPods and are majorly discounted to an all-time low price of $79 for Black Friday. If you’re on a budget and just looking for the basics (i.e. no noise-cancelation or adaptive EQ technology), these will do the trick.

AirPods Max is Apple’s take on over-ear headphones. They provide the most premium audio experience and most comfortable fit of the AirPods product lineup, perfect for those who spend multiple hours per day wearing headphones. In addition to spatial audio and active noise cancellation, AirPods Max also features a custom-built driver that delivers virtually undistorted sound directly into your ears.

If you’re looking to monitor workouts without breaking the bank, the Apple Watch SE is the way to go. It has the core fitness trackers like steps and heart rate and seamless iPhone connectivity features that users have come to expect from Apple Watches. And at only $149, it’s an all-time low price for Black Friday.

For the first time since it was released in September 2022, the Apple Watch Series 8 is on sale. One of the hottest tech gifts and gifts for fitness enthusiasts this year, it features new temperature sensors, sleep stage trackers, an upgraded edge-to-edge screen that stays on all the time and an 18-hour battery life.

While it isn’t the newest MacBook Air model, the Black Friday deal on the 2020 Apple MacBook Air brings it down to $799, which is the lowest price we’ve ever seen for a MacBook Air on Amazon (same as the Amazon Prime Day deal that sold out). The notebook offers up to 18 hours of battery life, weighs just 2.8 pounds, and has the Apple M1 chip for ultra-fast processing.

Bling Empire: New York’s Tina Leung on being in love with Gucci since high school, her career as fashion editor, influencer and stylist, and the Big Apple’s pull

Apple iPhone: Tips to customise your home screen to make the most of iOS 16

Apple Martin speaks! Gwyneth Paltrow's daughter, 18, gives RARE interview as she says she is inspired by the '90s when her mom was a red carpet trailblazer

Apple’s new comedy is the anti-'Ted Lasso,’ built on a taxingly unlikable protagonist

Apple won its biggest quarterly market share in China, outrunning covid disruptions and a global economic slowdown. The Cupertino, Calif., company accounted for nearly 24% of China’s smartphone sales in the last three months of 2022, according to Counterpoint Research data. It topped all manufacturers in the quarter, for the ...

The Apple Watch has an OLED screen for reading notifications and other updates, but what should users do when it zooms in on display and won’t return to normal? The Apple Watch has been around for quite some time, and Counterpoint research suggests that it is the most popular ...


View more: Why Your Apple Watch Screen Is Zoomed In (And How To Fix It)

MANILA, Philippines — The Department of Agriculture (DA) has collaborated with the University of the Philippines Los Baños (UPLB) to improve queen pineapple productivity and quality by adapting the Site-Specific Nutrient Management (SSNM) technology. The project will be led by DA-Bicol Region, following the success of the technology in other crops, such as corn. ...

The iPhone 14 Pro (top) and the Galaxy S22 Ultra (bottom) use pixel binning on their main sensors to open up new photo quality options. Lisa Eadicicco/CNET Megapixels used to be so much simpler: A bigger number meant your camera could capture more photo detail as long as the ...

When did Apple rumors stop being fun?

Here's how to make your Apple iPhone, iPad more secure with just a pen drive

When it comes to enjoying Apple's ecosystem, fewer devices is more

For the Emperor: Rare multi-crowned pineapples a prized offering for CNY

Android Auto and Apple CarPlay: Is One Better Than the Other?

Apple Martin's FIRST Vogue interview! Gwyneth Paltrow's daughter, 18, says she is inspired by the '90s when her mother was a red carpet trailblazer

Apple Reality Pro AR/VR headset: All the rumours about the anticipated mixed-reality device

Your older Apple kit has just sunk in trade-in value

Video: Brad Pitt blows up a blue rubber glove as he larks around while cruising around in a car with George Clooney on set of their New York based Apple thriller Wolves

‘Swagger’, Meryl Streep’s ‘Extrapolations’ And Other Exciting Shows On Apple TV+ In 2023