Canada's Mackenzie Hughes shot to the top of the Sanderson Farms Championship leaderboard in Mississippi on Friday thanks to a nine-under-par 63. 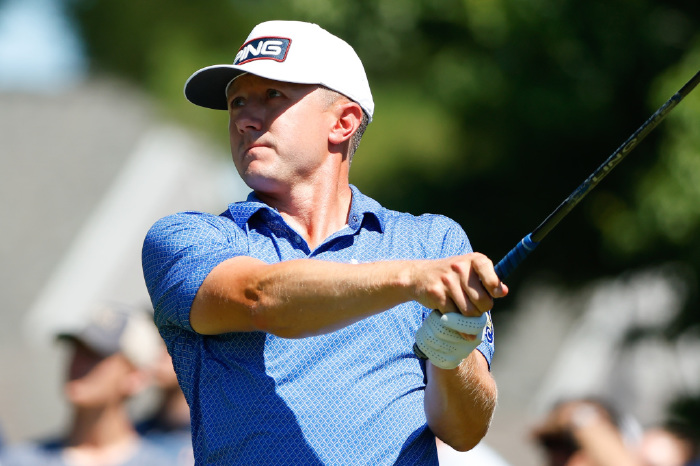 Hughes started the day with three birdies and never looked back, completing his round without a single bogey on his card.

He also closed with back-to-back birdies to lift himself to 10 under par – good enough for a share of the lead with Belgium’s Thomas Detry, who started the day near the top of the leaderboard and went one better thanks to a five-under-par 67.

Hughes credited a change of coach and some hard work in the gym for rediscovering his form.

“I started with a new coach a couple weeks ago and working on a couple small things which have been kind of showing on the golf course, and I’ve been putting in a lot of work in the gym, so that’s been showing up as well,” said the 31-year-old.

“Just a combination of a few different things, but been working hard at it, and it’s always nice when you put in hard work and you get some good results.”

Detry, meanwhile, said a decision to go back to basics has done the trick for him.

“I’ve hit balls for like 15 minutes on the range on Tuesday, and I was hitting it well, so that’s all I have to do really.

“Work on pace a little bit, but my putting has been decent.”

Detry and Hughes are one stroke clear of Austria’s Sepp Straka, who moved into contention with a six-under-par 66.

Davis Riley, Nick Hardy and Germany’s Stephan Jaeger are tied for seventh on seven under.

Harbaugh, Lamar Jackson met after 'out of character' tweet OWINGS MILLS, Md. — Baltimore Ravens coach John Harbaugh said Monday that Lamar Jackson's vulgar response to a critic on social media was “out of character” for the Pro Bowl quarterback, suggesting Jackson got “trapped” by someone baiting him. Harbaugh ...

Paramount Pictures/YouTube Margot Robbie has played some pretty wild roles throughout her impressive career, like the unpredictable Harley Quinn in the DCU and the scandalous Tanya Harding in “I, Tonya.” But according to the actress herself, the movie “Babylon,” where she plays Nellie LaRoy, is “as wild as Wolf ...

DFree/Shutterstock James McAvoy has played a great many recognizable roles over the course of his career, but arguably none more recognizable than that of a young Professor Charles Xavier. Through no fewer than five films — from “X-Men: First Class” through 2019’s “Dark Phoenix” — McAvoy played the iconic ...


View more: How Mariah Carey’s love of Marilyn Monroe brought her to Broadway’s ‘Some Like It Hot’

Americans should expect Christmas trees to cost more this year, and they may want to buy their spruces early, according to a survey of wholesale growers. Inflation hit 7.7% in October, and Christmas tree growers weren’t spared with gasoline, diesel and fertilizer prices soaring. More than a third of Christmas ...

Singer Dua Lipa has been granted Albanian citizenship. (Credit: Getty Images) Singer Dua Lipa is one of the most popular pop artists in the world at the minute. Her fame has continued to rise after her hugely successful release of the 2020 album ‘Future Nostalgia’, which spawn hits such ...


View more: Dua Lipa: why did singer get Albanian citizenship, has she changed her name, where was she born?

The Giants aren’t American Airlines: they still want Odell Beckham Jr. on board. The team still plans to host OBJ on Thursday and Friday for a free agent visit, even though Beckham was escorted off a Sunday flight from Miami to Los Angeles, the Daily News has learned. The Cowboys, ...

A judge in Wisconsin is ordering Enbridge Inc. and an Indigenous band to confer about “imperfect” alternatives to shutting down the cross-border Line 5 pipeline. District Court Judge William Conley calls the prospect of shutting off the line “draconian” and wants Enbridge and the Bad River Band of the Lake ...