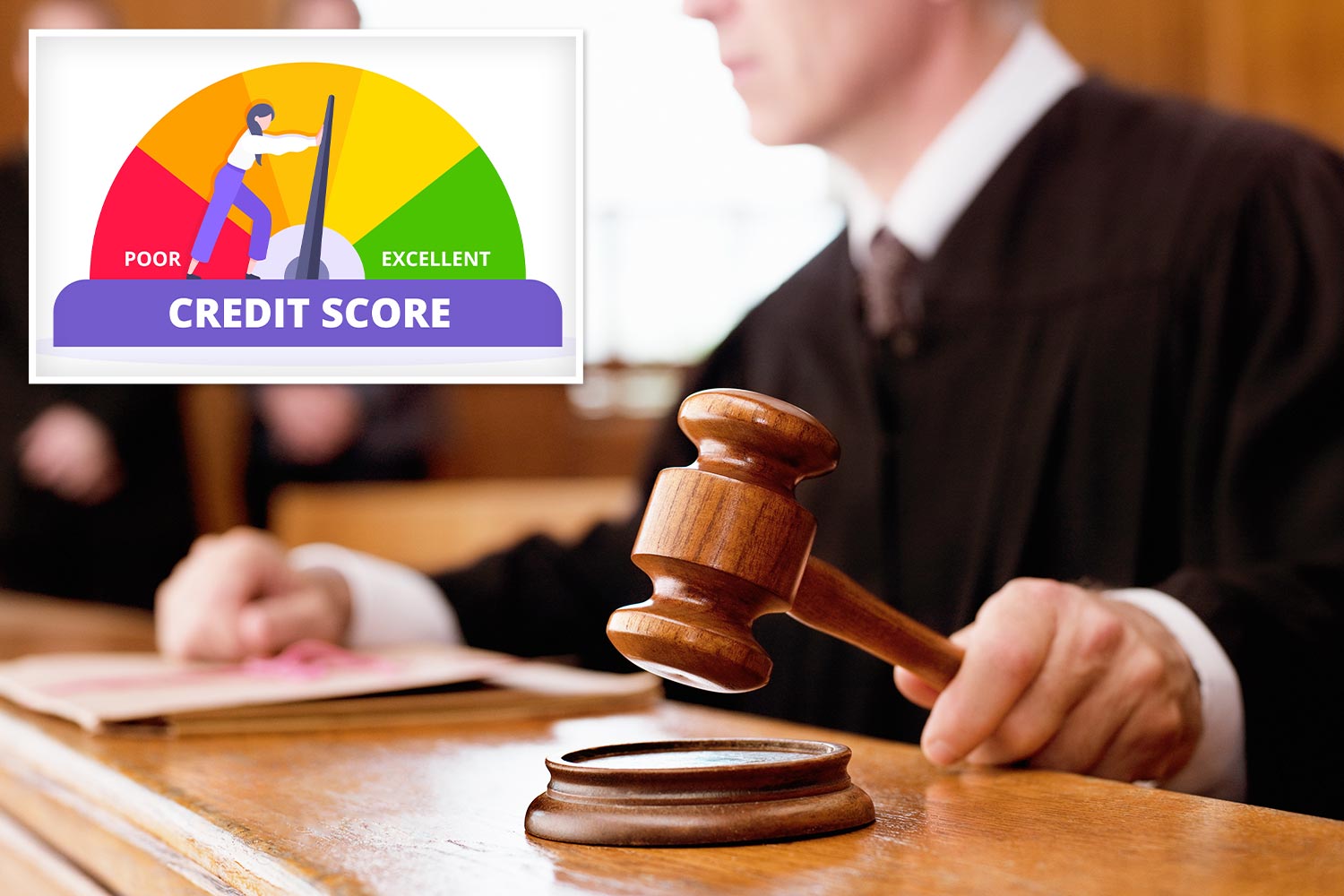 HUNDREDS of thousands of hard-up Brits are having credit scores ruined over unpaid bills.

The number of County Court Judgements (CCJs) being handed out are on the rise, with a seven per cent jump between April and June this year compared to the same period in 2021, according to the Registry Trust, which holds the records. The number of County Court Judgements (CCJs) are on the riseCredit: Getty

A CCJ negatively impacts your credit score, reducing your chances of borrowing money and severely affecting your finances.

They are expensive and hard to wipe if there’s a mistake.

Experts warn that the situation is only going to get worse, as energy bill hikes hit next month and interest rates continue to rise, piling extra pressure on households.

Alexandra Jones, CEO of Registry Trust, says: “The number of CCJs is going up across the country.

“The value of the unpaid debts is higher and the number of people able to pay them back is falling.”

WHAT IS A CCJ?

WHEN a company or individual is owed money and is unable to get the debt repaid they can ask the courts to take legal action.

This could concern unpaid credit cards, rent, loans, mortgages or some other household bill or debt.

Once the company refers your case, the court sends you a claim form demanding that you pay off the debt.

Half of CCJs are from unpaid parking tickets.

If you can’t pay, you will have a CCJ registered against you.

WHAT HAPPENS IF YOU’RE HIT WITH A CCJ?

CCJs have a devastating effect on your finances.

You’ll almost certainly be refused a credit card, loan and car finance while it is active.

You won’t be able to get a mortgage or remortgage to a cheaper deal until the CCJ is at least a couple of years old or you’ve paid it off.

Even then your rate will be more expensive.

If you rent privately, it’s unlikely you’ll be able to start a new rental agreement if you need to move.

Most companies will run a credit check before offering you a job and are put off by a CCJ.

If you work in finance, you could find your existing job on the line.

Even if you didn’t receive the letter or read it, it’s still enforceable.

Two days after sending the form, the court deems it “served”.

You’re then expected to pay off the debt in 14 days.

If they sent the CCJ to the wrong address, it would have been your responsibility to update companies with your new details when you moved home, so it’s still valid.

It is hard to erase a CCJ even if it is handed out in errorCredit: Getty

CAN YOU GET IT CANCELLED?

YES, but it’s not cheap. There are court fees to pay even if it wasn’t you who racked up the debt, and there was a mix-up on the address.

Instructing a lawyer to help will heap another couple of thousand quid on top.

Where a CCJ is issued in error don’t ignore any letters from the court, says Sue Anderson of debt charity StepChange.

“Time is of the essence. Reply promptly and keep evidence that you have replied — whether that’s through proof of posting or online acknowledgement of the form being completed,” she advises.

Where the debt is yours, if the company you owe money to agrees to consent for the judgement to be set aside, you can avoid a hearing.

If the company doesn’t agree, the court fee is £275 and a hearing date will be set.

HOW LONG DOES IT TAKE TO REMOVE A CCJ?

IF you pay a CCJ off in full within a month it will be removed from your record completely.

If you repay it after the first month, the CCJ will stay on your record but it will be shown that you’ve settled it.

It’s possible to agree to pay off part of the debt or to pay in instalments.

However, unless you repay all of it, the CCJ stays on your record for six years.

WHAT IF YOU CAN’T PAY?

If you can’t cover the debt, you can be threatened with bailiffs who will seize your belongings to cover the amount you owe.

“If you’re harassed by a debt collector, make a formal complaint to the business you owe money to and ask them to suspend debt collection procedures while the matter is investigated,” says consumer expert Martyn James.

“Debt collection can be deeply traumatic. If you have asked for help because of financial difficulties and they’ve passed on the debt, then that’s a valid complaint.”

You can get temporary protection through the government’s Breathing Space scheme and will need a debt advisor to help you apply.

Emma Mcintyre/Getty Images “How I Met Your Father” — the spin-off series to one of the most popular sitcoms of recent years, “How I Met Your Mother” — premiered on Hulu in January of 2022. Created by Isaac Aptaker & Elizabeth Berger, the series follows Sophie (Hilary Duff), a ...


View more: Hilary Duff Thinks How I Met Your Father's Laugh Track Is An Asset

Marvel Entertainment/YouTube The Talokani of “Black Panther: Wakanda Forever” have developed a fanbase of their own, in part due to their iconic salute and charismatic leader, Namor. That’s not even accounting for the aquatic race’s snazzy outfits, which inspire both fear and awe due to their combination of ancient Mayan ...

Mills Lane, the Hall of Fame boxing referee who was the third man in the ring when Mike Tyson bit Evander Holyfield’s ear, died Tuesday. He was 85. Lane suffered a stroke in 2002 and his son, Tommy, said his father had taken a significant turn for the worse recently ...

Good evening. I’m Karen Kaplan, and it’s Tuesday, Dec. 6. Here’s the latest on what’s happening with the coronavirus in California and beyond. Newsletter Get our free Coronavirus Today newsletter Sign up for the latest news, best stories and what they mean for you, plus answers to your questions. You ...


View more: Coronavirus Today: Has China set itself up for a COVID disaster?

Only eight teams are still alive in Qatar, but which nations make the best matchups?

Premier David Eby is set to more of his fingerprints on B.C.’s government. Eby has chosen a new cabinet and the new ministers will be sworn in by Lieutenant Governor Janet Austin at a ceremony on Wednesday morning. The ceremony will be broadcast live on BC1 and here on the ...

A Penticton, B.C. business owner is pleading with the city to reevaluate downtown paid street parking, nearly two years after the program was introduced. Ryan Oickle co-owns Gratify Foods on Main Street, and posted his frustrations to social media, gaining an overwhelming amount of support. “My post was made not ...

Marvel’s Midnight Suns – All Trophies and how to obtain them

Quarter of a million unemployed young Britons are planning to NEVER get a job, survey shows

The Co-Creators Of Avatar: The Last Airbender See Themselves In Two Of The Show's Main Characters

Chaos in the Bronx: gunman unloads on three teens and elderly man

Taiwan foreign minister: China may scapegoat us over Covid protests

How to Change Your Mac's Startup Disk

Pokemon Scarlet And Violet: How To Evolve Gimmighoul Into Gholdengo

Pokemon Scarlet And Violet: How To Get The Lucky Egg

Pokemon Scarlet And Violet: How To Relearn Moves

Cramer's Lightning Round: I Like Advanced Micro Devices Over Micron

Say what you want: Kirstie Alley never backed down from defending Scientology

Feeling sick? How to know if you have COVID, RSV or the flu

Aaron Boone has no Aaron Judge updates to offer: ‘I know nothing’

Who Would Win In A Fight: Troll Or Godzilla?

How Much Did The Cast Of Friends Get Paid?

Lawsuit Alleges South Side Woman Was Swindled Out of $400,000 by Financial Adviser Who Used Money to Fund Film Production Company

Biden’s pathetic disregard for the humanitarian catastrophe at the border

Extreme cold one day, balmy the next: Alberta’s yo-yoing temperatures a literal headache for many