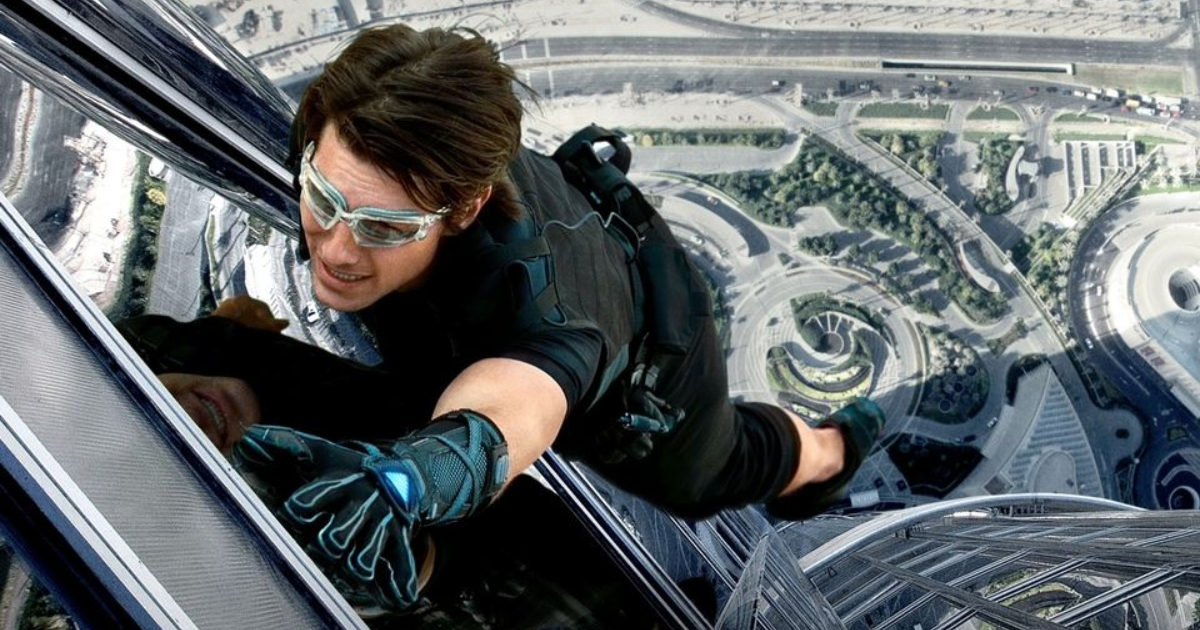 Husband-and-wife pair, Jason and Sarah Haygarth, were on a walk with their dog in a very remote and quite hilly U.K. national park called Like District when to their surprise, they noticed an unusual sight. Helicopters were hovering over one area. The Haygarths told Extra:

“Toward the end of the walk, last peak, we start seeing helicopters coming up a ravine and dropping people off the top… We were like, this didn’t seem right. We found out the people, they were the cameramen. When we came to the peak, we got stopped by what must have been a production team member, saying, ‘You can’t go. We’re going to land the helicopter off the top…’ So, we took a selfie.”

After Sarah and Jason got the “all clear” to continue their hike, the couple stumbled upon actor Tom Cruise “strapping himself into a paraglider.”

“I could tell it was him straight away. By the time we got there, people were talking about Mission: Impossible was being filmed … but I was expecting a stunt double.”

Jason recounted their chat with the star:

The Sun shared footage of Cruise jumping from the cliff for the stunt scene.

Tom Cruise Has Been a Daredevil Since Early an Age

Earlier this year, the 60-year-ol actor spoke during a panel at the Cannes Film Festival where he confessed to being a daredevil since he was a young boy. Cruise recalled:

“I think I was about 4½ years old, and I had this doll, and you throw it up in the air and a parachute comes down. I played with this thing, and I’d throw it off a tree, and I was like, ‘I really want to do this.’ I remember taking the sheets off my bed, and I would tie a rope … and I climbed up to the eave, and I got up to the roof. I looked and my mother was in the kitchen — she had four kids — and I jumped off the roof.”

How to Spend a Perfect Weekend on Nantucket

The Daily Sweat: Bears, Seahawks trying to find themselves as NFL preseason continues

New Moderna Covid jab to be offered on Isle of Man

'Wild' And 'Chaotic': Inside The Job Of A Nail Polish Creator

LeBron James Agrees To New Contract That Will Him Make Highest-Paid NBA Player Ever: Agent

Meal Prepping? These Mixing Bowls with a Clever Design Lets You Grate, Stir, and Pour Mess-Free

NED vs PAK 2nd ODI live streaming: When and where to watch Netherlands vs Pakistan match?

ned vs pak 2nd odi live streaming: when and where to watch netherlands vs pakistan match? After an enthralling first ODI where the Netherlands came close to beating Pakistan, the two teams re-align themselves for the second ODI. Pakistan scored 314 runs while batting first in the first ODI, ...


View more: NED vs PAK 2nd ODI live streaming: When and where to watch Netherlands vs Pakistan match?

'Emergency Declaration' Director on COVID Providing 'Spoiler' for the Film

The ongoing COVID-19 pandemic feels like a chilling case of life imitating art via Emergency Declaration, the gripping new Korean blockbuster film about a fictional virus outbreak, which was devised years before the pandemic. Starring Parasite actor Song Kang-ho (named Best Actor at the 2022 Cannes Film Festival) and Screen ...

GOP 'tripled down' on Trump's 'toxicity' -- and 'it's making them all seem like lunatics': MSNBC's Heilemann

By Travis Gettys Donald Trump shows passion while delivering a campaign rally speech at the Mohegan Sun Arena. (Evan El-Amin / Shutterstock.com) MSNBC’s John Heilemann admonished Republicans for circling their wagons around Donald Trump before they even learn the full facts about what top-secret documents he squirreled away at Mar-A-Lago. ...


View more: GOP 'tripled down' on Trump's 'toxicity' -- and 'it's making them all seem like lunatics': MSNBC's Heilemann

Best PS5 Games On PS Plus Premium & Extra In June 2022 in North America, Sony launched a revamped version of PlayStation Plus that combines the previous model with PS Now. Split into three tiers, subscribers who invest in PS Plus Extra or Premium gain access to a wide ...

Special Agent Anthony Salisbury displayed some of the weapons seized that had been destined for Haiti US officials say there has been a surge of high-powered weapons being smuggled from Florida to Haiti. The Caribbean country has been rocked by brutal gang warfare in which hundreds of people have ...

‘World’s largest moth’ found hanging out on a garage in Washington, photos show

The moth is usually only spotted in the tropics. It’s burnt orange and bigger than an adult hand, and its species isn’t supposed to be flying around Washington. A University of Washington professor, however, found one lurking on his Bellevue garage in July. It turned out to be the world’s ...

Flights were grounded again this week at a New York airport — this time because of law enforcement activity: FAA

Mahmoud Abbas reminds us that he's a rabid antisemite

At Least 6 Minors Shot in Chicago in Last 24 Hours

Turns Out That Redstone in Minecraft Is Radioactive

Bravo Sierra to Enter Walmart Following $17 Million Series B Round

Ditch the bulky high-end models and instead haul drinks on your back with Icemule's comfortable, roomy, waterproof cooler sack

Tower Of Fantasy: All Region Scenic Point Locations In Navia

In Bangladesh's success and Sri Lanka's failure, a reminder that free markets matter

Social Security: Who's Ready for an Extra $159 a Month?

A Growing Team: Emirates To Hold Three Cabin Crew Open Days In The US This Month

Op-Ed: How an antitrust trial could reshape the books we read — and who writes them