To view this video please enable JavaScript, and consider upgrading to a web browser that supports HTML5 video

This shocking CCTV footage shows a dog walker come within seconds of being hit by a speeding train.

It was filmed three weeks after another terrifying near miss at the same spot at the Harlech Cliffs level crossing between Machynlleth and Pwllheli in northwest Wales.

The clip has been released by National Rail as part of a safety warning urging people to have their wits about them when using rail crossings.

Parents are advised to keep children close at all times, with pets kept on leads, while everyone should take notice of safety signs before setting foot on the intersections.

Train driver Mike Leonard, 54, recalled the earlier near miss: ‘I saw two white things on the track, I thought they were sheep.

‘Then I realised they were dogs and suddenly this elderly man with a walking stick came up from the beach and just stepped out in front of the train, too.

‘The dogs weren’t on a lead and the man didn’t even look as he crossed.

‘I was about four seconds away from hitting him.’

Mr Leonard says he has lost count of the number of time he has nearly hit people who have wandered onto the tracks when it was unsafe.

He went on: ‘In that moment you’re actually helpless.

‘You put the brake into emergency, you blow the horn, and it’s out of your hands. The train stops when it stops. You just watch everything unfolding in front of you. It’s like it all just slows down.

‘I have had around six instances I would call very bad near misses, where people have been seconds away from being hit by the train.

‘One time involved two school children near Shrewsbury where one was dancing on the track, purposely misusing the level crossing – recklessly risking their life.’

The driver is one of many rail industry workers who have had to take time off work after witnessing a near miss or fatality on the job. He said incidents like this can cause a lot of stress and anxiety.

He went on: ‘The impact of these incidents, especially fatalities of this kind, reach further than people think. 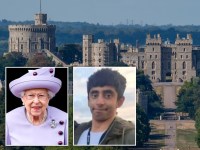 ‘You sometimes go blank, and you keep on thinking about it – the “what ifs” really play on your mind. The more instances you have, it’s like you’ve had enough, it can be depressing.’

Krista Sexton, head of operational risk at Network Rail Wales and Borders said: ‘Trains approach almost silently. If you’re distracted by a dog, headphones, mobile phone or anything else, you won’t notice a train approaching until it’s too late.

‘Our advice is simple: STOP, LOOK and LISTEN before using a railway crossing and stay alert.’

Phil Caldwell, Network Rail’s level crossing manager for Harlech, added: ‘Please let your memories be happy ones and not marred by the loss of your beloved pet or worse!’

John Henry Ramirez wanted to die in physical contact with his pastor, accompanied by the prayers of the clergy person who had been mentoring him since 2015. He took that wish to the Supreme Court of the United States. While the case was being decided, the judges halted his execution ...

Smart meters Smart meter payouts for households to use less energy at peak times will be made permanent to help the UK hit its net zero goals. The National Grid is offering to pay households with smart meters if they reduce use during peak hours on days when wind ...

IFC Films A Lithuanian, French, and Belgian film, “Vesper” is an unsettling dystopian film that lingers for days beyond any viewing. While marketing for the film has been fairly quiet, “Vesper” has received positive reviews for its excellent cast, gorgeous world-building, and message of hope. For those who have ...

Enchirito supremacy. Taco Bell One group of passionate fast-food fans can rejoice today. After announcing on Sept. 27 that it would bring back a retired menu item, Taco Bell on Friday revealed which one it will be and when you can snag one. Word of the victor comes after customers ...

Yoni Barrios (Las Vegas Police Dept.) A man who police said used “a large kitchen knife” to kill two people and injure six others in a stabbing spree on the Las Vegas strip on Thursday has been identified and charged with murder. “The suspect in [Thursday’s] stabbings on Las ...

Lewisham Council is investigating the ownership and management of an unlicensed House of Multiple Occupancy (HMO) A South London neighbourhood has been left in shock after youths “wielding machetes broke into a house”.Police were called to Ardmere Road, Lewisham, on September 6 following reports of a gang on mopeds ...

Nike has suspended its partnership with and paused support for Hockey Canada as the sports organization faces increasing pressure to handle alleged sexual assaults. Nike spokesperson Sandra Carreon-John says the athletic brand made the move because it was “deeply concerned” by the ongoing reports around Hockey Canada. She says Nike ...

CLEVELAND — José Ramírez connected for a two-run homer, Shane Bieber dominated Tampa Bay for 7 2/3 innings and the young Cleveland Guardians played with poise in their postseason debut, beating the Rays 2-1 in the wild-card opener on Friday. Ramírez’s shot off Shane McClanahan in the sixth inning helped ...