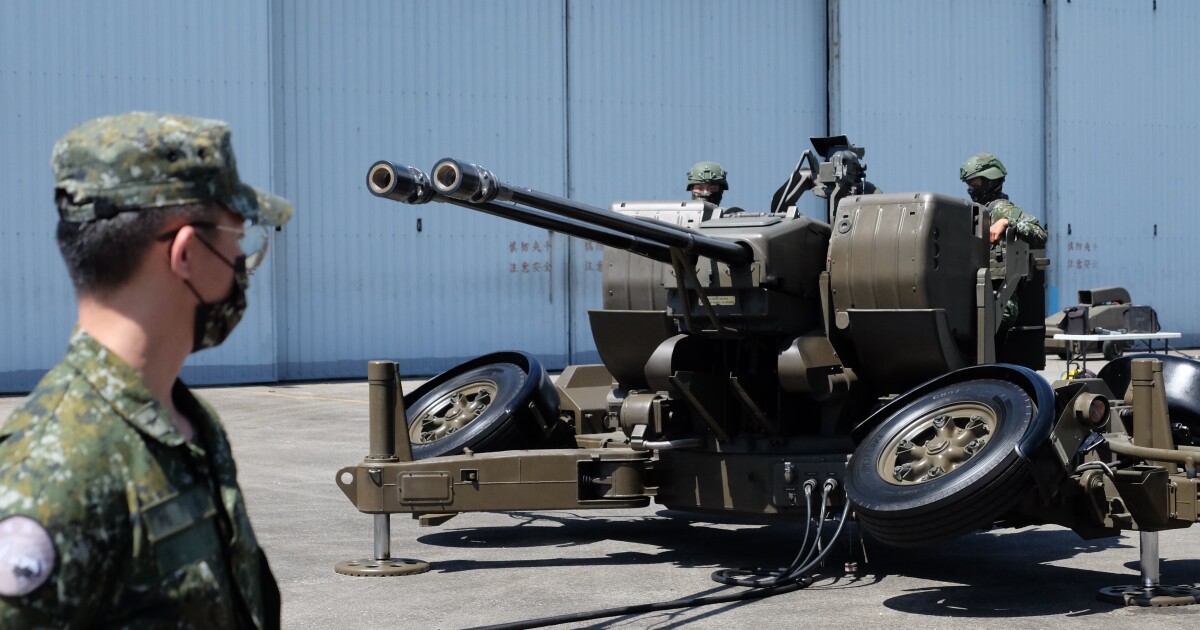 The U.S. government Thursday announced trade talks with Taiwan in a sign of support for the self-ruled island that China claims as its own territory, prompting a warning by Beijing that it will take action if necessary to “safeguard its sovereignty.”

The announcement comes after Beijing fired missiles into the sea to intimidate Taiwan after U.S. House Speaker Nancy Pelosi (D-San Francisco) this month became the highest-ranking American official to visit the island in 25 years.

Chinese President Xi Jinping’s government criticized the planned talks as a violation of its stance that Taiwan has no right to foreign relations. It warned Washington not to encourage the island to try to make its de facto independence permanent, a step Beijing says would lead to war.

Also Thursday, Taiwan’s military held a drill with missiles and cannon simulating a response to a Chinese missile attack.

Taiwan and China split in 1949 after a civil war and have no official relations but are bound by billions of dollars of trade and investment. The island never has been part of the People’s Republic of China, but the ruling Communist Party says the island is obliged to unite with the mainland, by force if necessary.

President Biden’s coordinator for the Indo-Pacific region, Kurt Campbell, said last week that trade talks would “deepen our ties with Taiwan” but stressed that policy wasn’t changing. The U.S. has no diplomatic relations with Taiwan, its ninth-largest trading partner, but maintains extensive informal ties.

The U.S. Trade Representative’s announcement of the trade talks made no mention of tension with Beijing but said “formal negotiations” would develop trade and regulatory ties, a step that would entail closer official interaction.

Being allowed to export more to the U.S. might help Taiwan blunt China’s efforts to use its status as the island’s biggest trading partner as political leverage. The mainland blocked imports of Taiwanese citrus and other food in retaliation for Pelosi’s Aug. 2 visit.

Taiwan’s Foreign Ministry expressed “high welcome” for the trade talks, which it said would lead to a “new page” in relations with the U.S.

Sino-U.S. relations are at their lowest level in decades amid disputes over trade, security, technology and Beijing’s treatment of Muslim minorities and Hong Kong.

The USTR said negotiations would be conducted under the auspices of Washington’s unofficial embassy, the American Institute in Taiwan.

“China always opposes any form of official exchanges between any country and the Taiwan region of China,” said Shu.

Get breaking news, investigations, analysis and more signature journalism from the Los Angeles Times in your inbox.

“China will take all necessary measures to resolutely safeguard its sovereignty,” Shu said.

Washington says it takes no position on the status of China and Taiwan but wants their dispute settled peacefully. The U.S. government is obligated by federal law to see that the island has the means to defend itself.

“We will continue to take calm and resolute steps to uphold peace and stability in the face of Beijing’s ongoing efforts to undermine it, and to support Taiwan,” Campbell said during a conference call Friday.

Taiwan, an island of 23.6 million people, has launched its own military drills in response.

On Thursday, drills at Hualien Air Base on the east coast simulated a response to a Chinese missile attack. Military personnel practiced with Taiwanese-made Sky Bow 3 anti-aircraft missiles and 35mm anti-aircraft cannon but didn’t fire them.

“Our usual training is to be on call 24 hours a day to prepare for missile launches,” Chen said. “We were ready.”

The U.S.-Taiwanese talks also will cover agriculture, labor, the environment, digital technology, the status of state-owned enterprises and “non-market policies,” the USTR said.

Washington and Beijing are locked in a 3-year-old tariff war over many of the same issues.

NL East didn't have anything for the 2022 Cubs

The Miniature Cookie Dessert That Has Costco Shoppers Freaking Out

Coolio was a father of 10 and grandfather of five. Chris Pizzello/Invision/AP Beloved late rapper Coolio was very much a family man before his sudden death at age 59 this week. The “Gangsta’s Paradise” hitmaker often gushed about his life not only as a father but as a grandfather. ...


View more: Coolio revealed he had five grandkids just months before his death


View more: After 11 years the Lamborghini Aventador retires from production

Here are two stocks with buy rank and strong income characteristics for investors to consider today, September 30th: The Bank of N.T. Butterfield & Son Limited NTB: This company which provides a range of community, commercial, and private banking services has witnessed the Zacks Consensus Estimate for its next year ...

MIAMI, FL – MAY 17: ESPN Analysts Mark Jackson, Jeff Van Gundy, and Mike Breen, pose for a photograph before the game between the Boston Celtics and the Miami Heat during Game 1 of the 2022 NBA Playoffs Eastern Conference Finals on May 17, 2022 at FTX Arena in ...

One of the century’s most undervalued remakes rides a renewed wave of admiration Attempting to craft a worthy remake of an established classic has often proven to be a fool’s errand, but there have been a few exceptions to the rule when the second version has proven vastly superior ...


View more: One of the century’s most undervalued remakes rides a renewed wave of admiration

Treasury yields fell across the board on Friday, after a major stock sell-off over potential future interest rate hikes sent the S&P 500 to close at a 2022 low on Thursday. The yield on the benchmark 10-year Treasury was down 2 basis points to 3.7181% at around 4:40 a.m. ...


View more: Treasury Yields Slip Across the Board After Sharp Stock Market Sell-Off

Brentford manager Thomas Frank is expecting star striker Ivan Toney to be disappointed about missing out on making his debut for England but insists the positives outweigh the negatives.

Woman taken to hospital after being attacked by multiple men on Covington walking trail, police say

Woman taken to hospital after being attacked by multiple men on Covington walking trail, police say Police in Covington are investigating a terrifying incident on Cricket Frog Trail from Monday, where a woman claimed she was attacked by two men while walking her dog. Once on the scene, officers ...

The Truth About Princess Diana's Parents

Key Reasons to Retain Danaher (DHR) Stock in Your Portfolio

For California’s Uyghur community, Winter Olympics are a slap in the face

Key Largo is so flooded that crocs swim in streets — and you can’t even flush the toilet?

Jason Heyward reveals plan for 2023 after parting ways with Cubs