The UK must brace for a brutal Arctic deep freeze lasting a week that could send temperatures plunging to a bone-chilling -10C, weather forecasters have warned. Several yellow weather warnings for snow and ice have been issued by the Met Office for today and tomorrow, covering most of Scotland and parts of England and Wales. But the latest weather maps show the UK turning icy blue over the course of the next two weeks which could send the mercury plunging well below freezing throughout the country.

This Arctic blast will trigger widespread snow, with large parts of Britain covered, particularly towards the middle of December.

Brian Gaze from The Weather Outlook told Express.co.uk: “The combination of high pressure over Greenland and low pressure over Scandinavia will lead to very cold Arctic air being pulled southwards over the UK during the next few days. Unusually for the UK it looks as though the cold period will last a week or longer.

“Snow is possible anywhere, but in the short term the main risk is in the northern half of Scotland where up to 10cms could fall on Wednesday. A disturbance moving southwards during Thursday may bring a little snow even to parts of central and southern Britain.

“A key feature of this cold spell is likely to be very low temperatures. The combination of very short days, slack pressure patterns and the possibility of snow cover means that it is not out of the question that -20C will be recorded in the Scottish Glens during the next week. 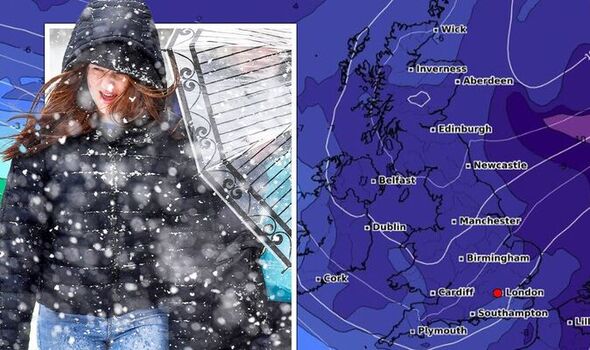 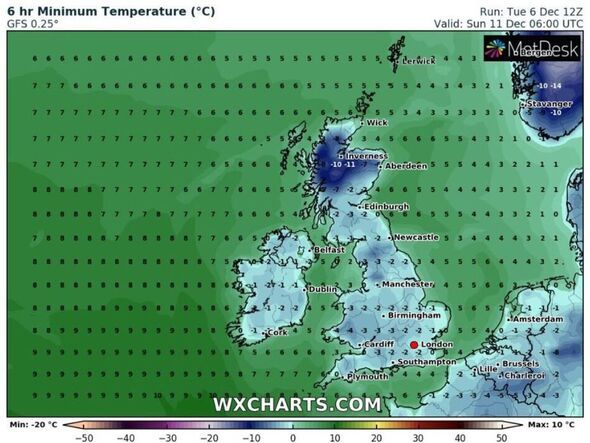 “In the southern half of Britain temperatures will probably plunge to between -5C and -10C in some locations and in the Welsh valleys they may fall below -10C.

“Forecast details become much more uncertain next week, but some computer models are showing areas of low pressure starting to push up from the southwest.

“It is only one possible scenario being shown by computer models at the present time, but if it happens the chance of disruptive snow in the southern half of Britain will increase.”

Met Office Deputy Chief Meteorologist Rebekah Sherwin, said: “As the cold air pushes across the UK from the north temperatures will dip, with daytime temperatures struggling to get above freezing in many places from mid-week onwards. 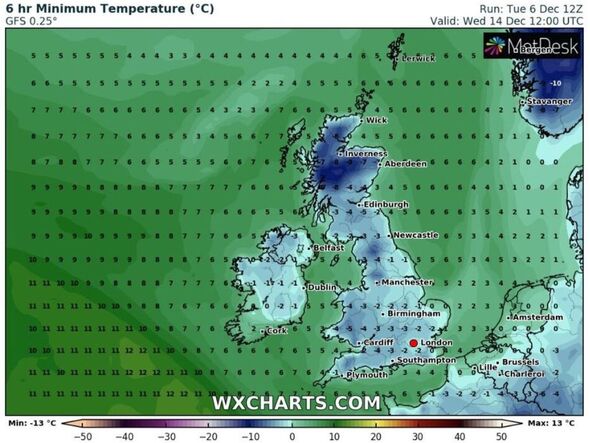 “However, the cold air from the Arctic will also bring brighter conditions, with some dry, sunny spells, particularly away from the coast.

“Showers will turn more wintry as the week goes on with a risk of snow at times. Yellow National Severe Weather Warnings for ice and snow have been issued for parts of Scotland, Northern Ireland, Wales and the east coast of the UK for Wednesday and Thursday.

“We can expect to see further snow and wintry showers as the week progresses, particularly in coastal areas or over higher ground. There will be widespread frosts with temperatures falling to as low as -10°C overnight in isolated spots by the end of the week. 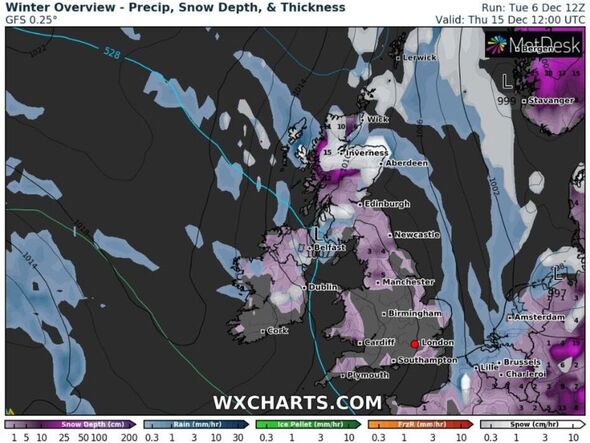 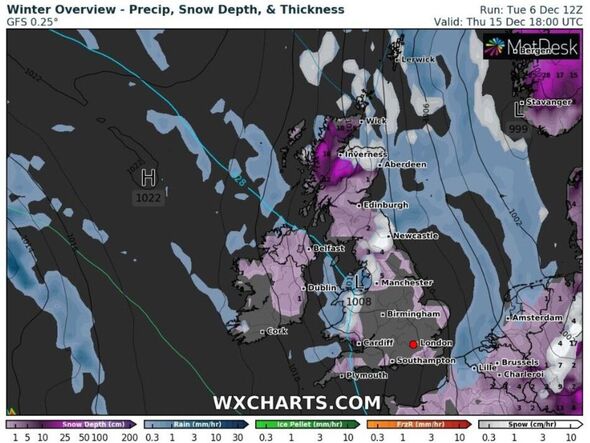 The latest weather maps from WXCharts show temperatures could fall below freezing for much of the UK today, particularly in Scotland and northern regions.

The mercury continues to plummet rapidly heading towards the weekend before lows of -11C are seen in northern Scotland on Sunday morning and only between -2C and -4C throughout England and Wales.

This Arctic freeze continues to have a firm hold over the UK during the early part of next week, with lows of -9C in Scotland on Monday, -2C in London and -3C across the rest Britain.

Minimum temperatures are forecast to remain well below freezing as tyhe week progresses, with -10C seen in Scotland on Tuesday as the UK weather map remains icy blue.

This bitterly cold trend continues heading towards the following weekend on December 17, with lows possible that are a few degrees below freezing – both day and night. During the week before Christmas, the mercury cold remain planted below freezing. 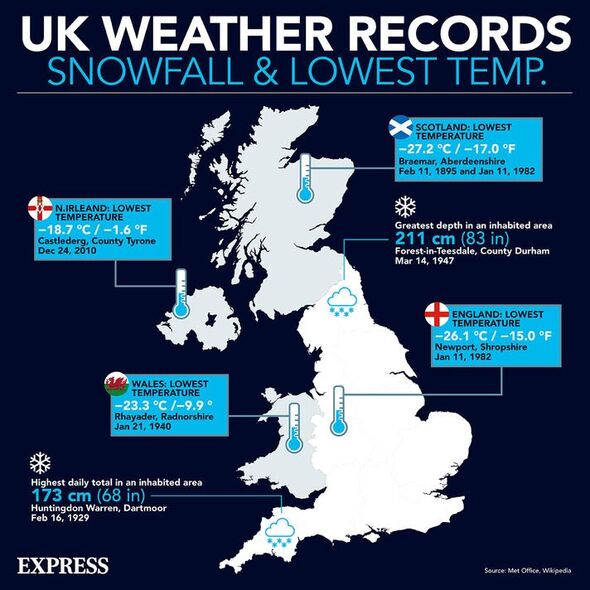 This Arctic blast will also trigger widespread snowfall, with up to 3cm falling in northern Scotland later today and 8cm tomorrow as most of the country is blanketed.

Snowfall ramps up even further on Friday, with up to 13cm falling in the same area north of the border, before the snow spreads southwards into England early on Saturday.

Up to 15cm of snow could fall in Scotland during the morning but later in the day, weather maps show northern England being hit by 4cm of snow throughout the rest of the weekend, with the South West, East Anglia and Wales also under threat.

The snow trend in these areas continues throughout most of next week until a rapid change on Thursday evening that begins to see the UK map turn icy white as temperatures plunge.

Heading into the early hours of December 16, nearly all of the UK is under threat from snow, with up to 16cm forecast for northern Scotland and 7cm for north west England.