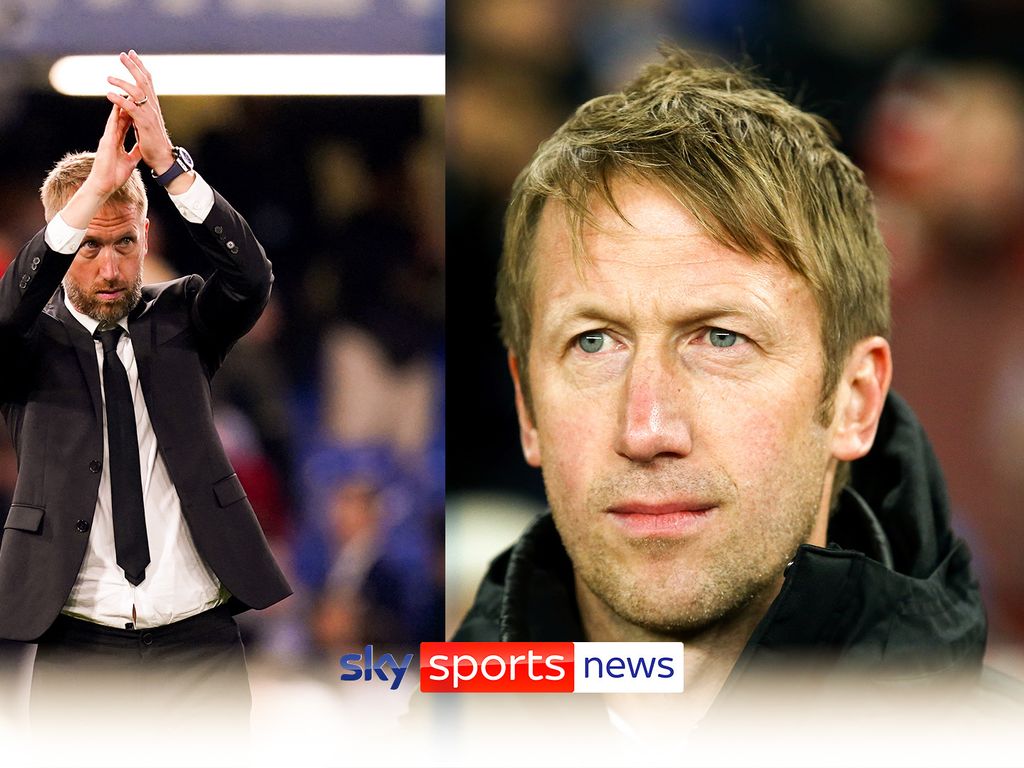 Graham Potter is preparing to manage Chelsea in the Premier League for the first time – another notable milestone in his unusual pathway to the top of the game.

The Blues boss – whose Chelsea side are away at Crystal Palace in a 3pm kick-off on Saturday – has been on a remarkable journey, from his playing days to coaching university sides, achieving success in Sweden and then building his reputation on these shores with Swansea and Brighton.

Sky Sports has taken an in-depth look at his story in a special ‘Making a Manager’ series, speaking with his former team-mates, coaches and colleagues to find out more about what has made the new Chelsea coach the manager he is today.

Potter’s playing career featured a stint in the Premier League and took him to clubs including Birmingham, Stoke, Southampton and West Brom. In total he racked up 350 appearances – but it could have been a few more.

While at his final club, Macclesfield, the left-back/left wing-back – described as good on the ball and elegant by former team-mates – suffered an unlikely accident.

“He’s having a cup of his green tea, he’s on his sofa,” explained former Macclesfield team-mate Jon Parkin. “As he’s gone to sit down, his dog has come past him and knocked the tea all down the front of his leg and he missed three or four weeks because of that!”

During his time as head coach at Swedish coach Ostersunds, Potter led the small, northernly club to back-to-back promotions to the top tier, a cup win and a Europa League victory over Arsenal in the first leg of their knockout tie.

But as well as revolutionising the team on the pitch, Potter also took his players into uncharted territory off it.

“The first thing we did was theatre,” said Lasse Lindin, Ostersunds club secretary. “Then we wrote a book together, we did an art exhibition – that was very interesting, some of the players didn’t know what to think about it! Then we did a musical and the money we got in from the musical was used to help refugees.”

One of his players, Tom Pettersson said: “It wasn’t always fun when you had to practice these things for three hours on a Tuesday afternoon but it was helping us. When we had our big performance at the end of the season, even though you suck at rapping, you felt ‘if I can do this in front of a 1,000 people or more, I can do whatever I want on the pitch’.”

Potter got stuck in himself, too, singing an anthem in a local dialect and a year later performing in the club’s rendition of ballet Swan Lake!

Potter retired from football in 2005 – the same year he completed his Open University degree in social sciences. It was just the start of his links with the world of education.

He went on to coach at Leeds Met, acted as Hull University’s Football Development Manager and ended up signing four players for Ostersunds who he used to coach for England Universities.

While at Leeds, Potter took advantage of an opportunity for staff to access courses and completed a Masters degree in leadership and emotional intelligence.

“It was a leadership qualification and that seemed to be quite interesting for me,” said Potter. “I’d done my qualifications as a coach. [Football management is] essentially man management and building an environment and understanding how the environment can help you shape behaviour and how people act. It sounds quite common sense, but it’s often not common practice, and that’s the beauty of it.”

Some of his most innovative tactics were learnt at York City

Potter is hailed as an excellent tactical coach, with innovative systems and ways of playing. But what is less well known is he picked up some of his key ideas while he was playing for Third Division York City in the early 2000s.

“At York, we would start off with a back three but depending on how the game was going, we’d be able to adapt to go with a back four,” said Terry Dolan, the club’s manager at the time.

“Whenever we wanted to change things, Graham always knew what to do and what we were asking for. I think he’s done that most of the time he’s been at Brighton – and I’m sure he’ll probably do the same at Chelsea.

“Seeing him managing Brighton, I can see exactly what he’s been trying to do over the years. He’s not just been a player on the field, he’s done a lot of work off the field to progress.”

It took a few months for his methods to take hold at Brighton but it paid off for the Seagulls. “We went through a bit of a transition period as a style of play, which I found exciting,” said Dale Stephens. “I was 30 years old and never played in the way Graham plays and I enjoyed that transition. He’s very much a modern manager.”

Potter’s varied career has also taken him into women’s football, working with the Ghana national team at the Women’s World Cup in China in 2007.

As technical director, Potter brought his methodical coaching practices to the team as they faced off with heavyweights Norway, Australia and Canada in the group stages. He wasn’t able to inspire the team to a major upset – but his sessions had a lasting impact on the players he coached.

“In training sessions in China he was there at the training ground. Back then nobody knew who he was but we knew they were different and had a different kind of mindset to the game, the way the game should be approached,” said Mavis Danso, a former Ghana international.

“The Ghana FA wanted to make sure the team was well prepared and there were good experienced people on the technical side to advise the coaches.

“He was really particular on how he wanted the defence to play, he wanted the outside backs to be more involved in the attacking. He was working on team shape where we needed to be when we did and didn’t have the ball.

“We’d do those exercises a lot in practice, it was a lot of repetition. But it was good because you remember what you have to do when you’re on the field. With his ideas, they were really good ideas.”