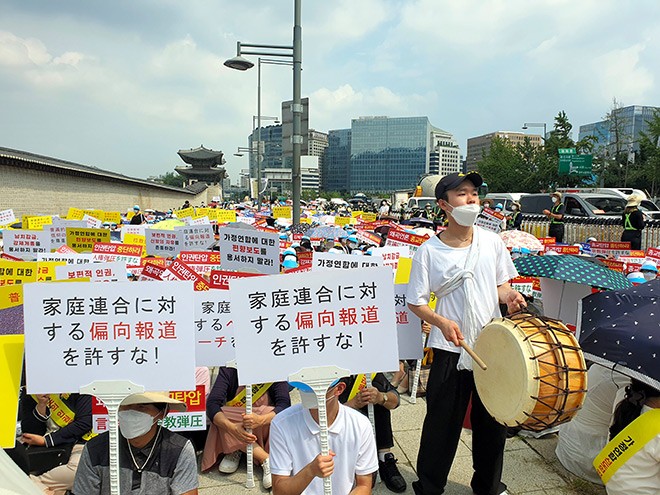 Members of the Unification Church gather at Gwanghwamun Square in central Seoul on Aug. 18 to protest Japanese media covererage of the church. (The Asahi Shimbun) 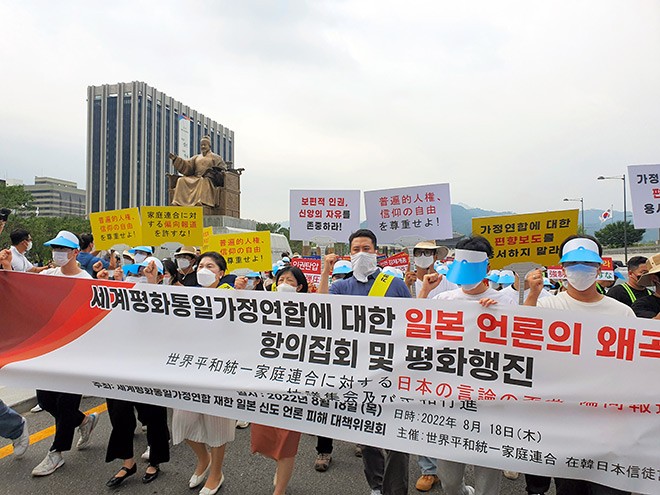 SEOUL—Thousands of Unification Church members held a protest rally here on Aug. 18, denouncing Japanese media coverage of their organization in connection with the killing of former Prime Minister Shinzo Abe.

The demonstrators said the Japanese coverage is “distorted and biased,” and gives the impression that Abe’s death can be directly attributed to the church.

The suspect in the July 8 attack told investigators he shot Abe because of his ties to the Unification Church, now formally called the Family Federation for World Peace and Unification.

He held a grudge against the church because his mother’s large donations to the organization financially ruined the family, investigative sources said.

After the rally, the protesters marched around Gwanghwamun Square, carrying signs in Japanese and Korean that said, “Respect religious freedom.”

The Unification Church, headquartered in South Korea, said about 4,000 people joined the protest in central Seoul, while South Korean police authorities estimated the crowd at around 3,500.

About 10,000 Japanese followers have married fellow South Korean members and are living in South Korea, the church said.