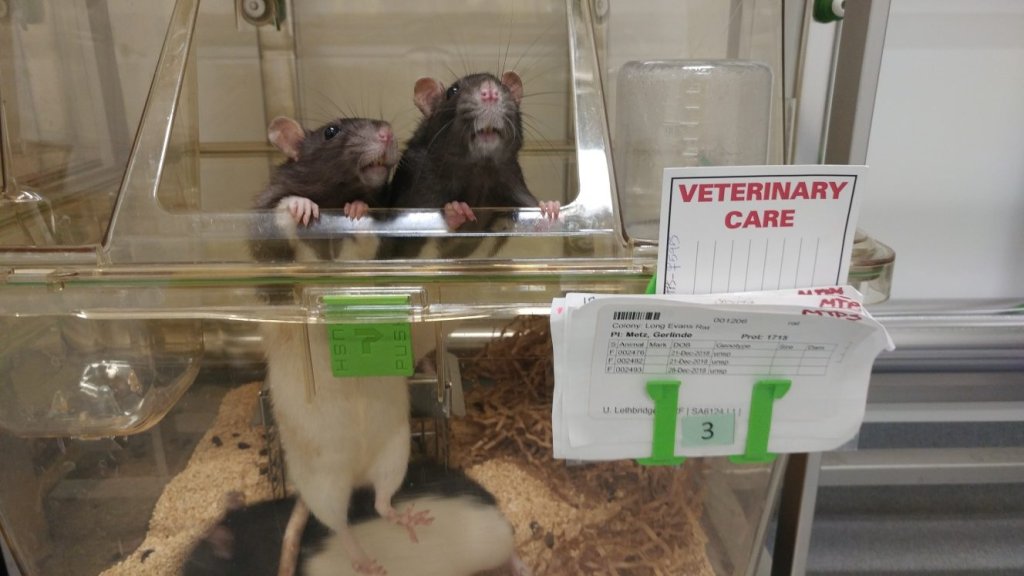 Lab rats lean out of their enclosure. A study from the University of Lethbridge finds the experimenter’s gender can cause higher anxiety responses in female rats.

Lab rodents may have ratted on themselves, exposing they’re not impartial when it comes to their handlers.

“As a scientist, you’re always concerned about the confounding variables in science, and so we’re looking at the future in order to control these unwanted factors,” said Dr. Jamshid Faraji, a researcher in the university’s department of neuroscience who contributed to the study.

Rats were handled by experimenters of different gender for five minutes a day over a 10-day period before undergoing mildly stressful situations.

“We are surprised, sort of, but we’re more glad to see this effect in order to establish a better study future,” Faraji said.

“We cannot avoid these effects, but we really have to do vigorous research to understand the underpinnings of the responses and phenomena that we’ve been seeing,” said Dr. Gerlinde Metz, a U of L professor of neuroscience also involved in the study.

“This is not about the past or previous studies, this is about the future,” he said.

But Metz is encouraging experimenters to avoid stepping in the same rat trap moving forward.

“They have to make sure, therefore at least we’re reporting who’s doing the observations and the assessments in the laboratory, in the literature,” Metz said.

The researchers believe taking an average of the results after a series of observations could reduce human influence in studies and the variable may be eliminated in the future with the possibilities presented by robotics.

This Vitamin C Serum Is Expensive—But It Actually Works

Toronto lawyer wins the day for dog ousted by condo board

PSA: Amazon Quietly Discounted Patio Furniture Covers Right When You Need Them — Up to 71% Off

No injuries after more than 12-hour police standoff at Ont. hospital

MISSISSAUGA, Ont. — Peel Regional Police say a standoff that began after 7:30 a.m. Friday at a medical facility in Mississauga, Ont. has ended. Authorities had been called to the facility next to Credit Valley Hospital for reports of a what they described as a “barricaded person.” Crisis negotiators were ...


View more: No injuries after more than 12-hour police standoff at Ont. hospital

Alberta’s COVID-19 hospitalizations are spiking and experts say the big question now is how high the fall surge will go. The number of people hospitalized with the virus jumped from 843 last week to 980 this week — an increase of 137 people in one week. In intensive care, the ...

Rash of Ligue 1 red cards across France worries players and owners: 'They make mistake after mistake'

Rash of Ligue 1 red cards across France worries players and owners: ‘They make mistake after mistake’ French soccer has rarely been out of the headlines over the past few weeks with the Paul Pogba blackmail allegations, the sexual harassment claims against the French Football Federation as well as ...


View more: Creator's Stone meteorite to be returned to its historic site after over 150 years

TRANSPORTATION MINISTER Merav Michaeli attends a news conference at the new Allenby underground station of the light rail red line in Tel Aviv, in June. Transportation Minister Merav Michaeli said in an interview that as of next year, the light rail in the Gush Dan area will be active ...

Buccaneers, Chiefs will play in Tampa as scheduled


View more: Buccaneers, Chiefs will play in Tampa as scheduled

How to respond when municipal council wannabes come knocking

Business openings drop by 50 per cent as possible recession looms

One dead in collision involving two passenger vehicles and a motorcycle

Soldier, 18, who walked alongside Queen's coffin found dead at barracks

After 3rd major storm in 5 years, Magdalen Islanders say they're on 'front line' of climate change

SalamAir Signs Letter Of Intent For The Embraer E195-E2

Lululemon settles lawsuit with Peloton over allegations of 'copycat' clothing

Anderson Cooper's Son Wyatt, 2, Is 'Really Into' Going to School: 'It's So Cute'

Twitch will charge you $100 to pin your chat message for 2.5 minutes

5 Canadian Influencers You Need to Know

Pedestrian in critical condition after being hit by vehicle in Brampton

U.K. Woman Shows Us How to Easily Transform Corks Into Tiny Ghosts and It's Too Cute

China just boosted bank liquidity by 843%, adding further pressure on the yuan as the currency suffers its weakest year in almost 3 decades